Free agent Cristiano Ronaldo is yet to complete his transfer to Al-Nassr but the Saudi Arabian club have tabled a best offer to the Portugal star; Ronaldo's likeliest destination would be a club in Saudi Arabia, with the country keen to make him an ambassador for the game there

Al-Nassr have made the best offer so far to sign Cristiano Ronaldo, Sky Sports News has been told.

But, contrary to reports, the Portugal star has not completed a deal to sign for the Saudi Arabian club

Al-Nassr are one of a number of teams from the country interested in signing Ronaldo, who is a free agent after leaving Manchester United late last month.

Sky Sports exclusively revealed then that Ronaldo's likeliest destination would be a club in Saudi Arabia, with the country keen to make him an ambassador for the game there.

Ronaldo is currently still in action at the World Cup in Qatar, with his focus fully on overcoming Switzerland in the round of 16 to set up a potential quarter-final against Spain, should Luis Enrique's side beat Morocco on Tuesday.

Portugal coach Fernando Santos wasn't pleased with Ronaldo's reaction to being substituted in the defeat to South Korea but says the issue has been resolved ahead of the last-16 encounter with the Swiss.

"Have I seen the images when Ronaldo was subbed? Yes. Did I not like what I saw? No, I didn't like it one bit," Santos said.

'These matters are resolved behind closed doors. It's resolved. Full stop on this matter and now it's full focus on tomorrow's match." Marcus Rashford says it was an 'unbelievable experience' to play with Cristiano Ronaldo, and wishes him the best following his departure from Manchester United.

United issued a 67-word statement announcing they had reached a mutual agreement with the 37-year-old forward to terminate his contract.

In the interview on TalkTV - aired in two parts on Wednesday and Thursday last week - Ronaldo said he felt "betrayed" by the club and has "no respect" for manager Erik ten Hag.

The Portugal captain also claimed members of the United hierarchy were trying to force him out of Old Trafford and doubted him when he said he could not attend pre-season because his daughter was ill in hospital.

Gakpo: I'll decide on my future after World Cup 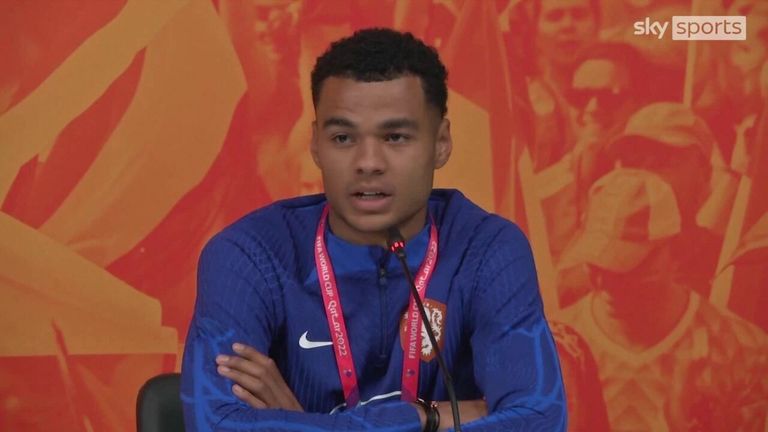 Netherlands forward Cody Gakpo responds to rumours linking him with a move to the Premier League but says he is focused on the World Cup.

Cody Gakpo revealed he will make a decision on his future after the World Cup. The Dutch striker has been linked with a £50m move to Manchester United.

When asked when he will decide about his future, he said: "After. I'm not thinking about that now.

"I'm just really focused on the tournament, trying to keep performing well and helping the team and hopefully when we become world champions then I can think about that [the future].

"I'm just trying to keep focused and the other players don't really talk about those things which also helps me in this situation.

"We came here with a goal which is to try to become world champion. We believe in that and we're going to fight and improve every day.

"We're growing in the tournament, improving every game and this was another step higher."

Canada striker Jonathan David would like to play in the Premier League one day but is paying no attention to reports linking him with a move amid interest from Manchester United.

The 22-year-old, who has scored 41 goals in 111 appearances in Ligue 1 for Lille, helped guide Canada to their first World Cup finals in 36 years.

David insists his focus on Canada's campaign has left no time to even consider speculation around his future.

"I am aware of nothing," he said. "When I am at the World Cup I am just focused on trying to enjoy the World Cup and enjoying the moment.

"What happens after I do not know, we will have to see. The Premier League is the best league in the world, and I think every player would want to play there some day."

Could Rice be on his way to Old Trafford? 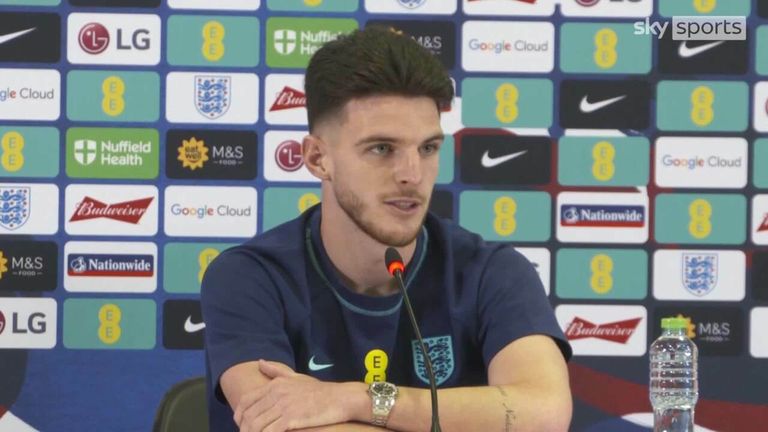 "There's a little bit of an unwritten rule in these press conferences with England where journalists are not really supposed to ask questions about club matters.

"However, one of my colleagues asked a very clever question that got Declan Rice to talk about his future.

"Effectively, he's got two years left on his contract at West Ham this summer and, so far, all the indications have been that he's not going to sign a new contract.

"You would think next summer would be the optimum time for West Ham to sell him, otherwise his value will start coming down.

"There's a general feeling he will leave West Ham this summer, although of course they don't have to sell him.

"The clubs who would be interested? We're talking about Chelsea, Manchester United and Manchester City, and possibly lots of other clubs as well."