There have been false dawns before. The hat-trick against Barnsley. More recently, the promising display against Everton. But nothing like this. Kai Havertz, false nine but genuine star as Chelsea played some stunning stuff in thrashing Crystal Palace.

His first season at Stamford Bridge has not been straightforward. Havertz is already working for his second coach at his new club and even this one has been openly speculating about how best to use him. "He is unique," says Thomas Tuchel. "It is not so clear where he needs to settle. Does he need to settle on one special position or is he a kind of hybrid player?"

There are signs that Tuchel has solved the conundrum. The fluency of Chelsea's performance in their 4-1 win at Selhurst Park was encouraging after that shock defeat to West Brom last weekend. The role of Havertz in the victory could be transformative.

The first goal was the sort of moment that supporters had been promised. The finish from a narrow angle was impressive but the goal was perhaps most notable for the calmness with which he converted it in an area where few show such composure.

Most players can appear rushed as the goal comes into view. Even a striker with such pedigree as Timo Werner has that problem right now. With Havertz, the game seems to go into slow motion. It can be a source of frustration at times but it might be his best asset.

There are others. The flaw with some false nines is their reluctance to run in behind but Havertz offers that too. He was in the left channel seconds later, gliding away from his marker before showing the awareness to pick out Christian Pulisic for the second.

His best bit of skill did not result in a goal but might have been one of the moments of the Premier League season if it had. Collecting Jorginho's lofted pass, Havertz flicked it over the defender with his left foot before forcing the save from Vicente Guaita with his right.

It was a remarkable piece of ingenuity that almost brought a third goal involvement in the space of 15 marvellous minutes in south London - doubling his total for the season. 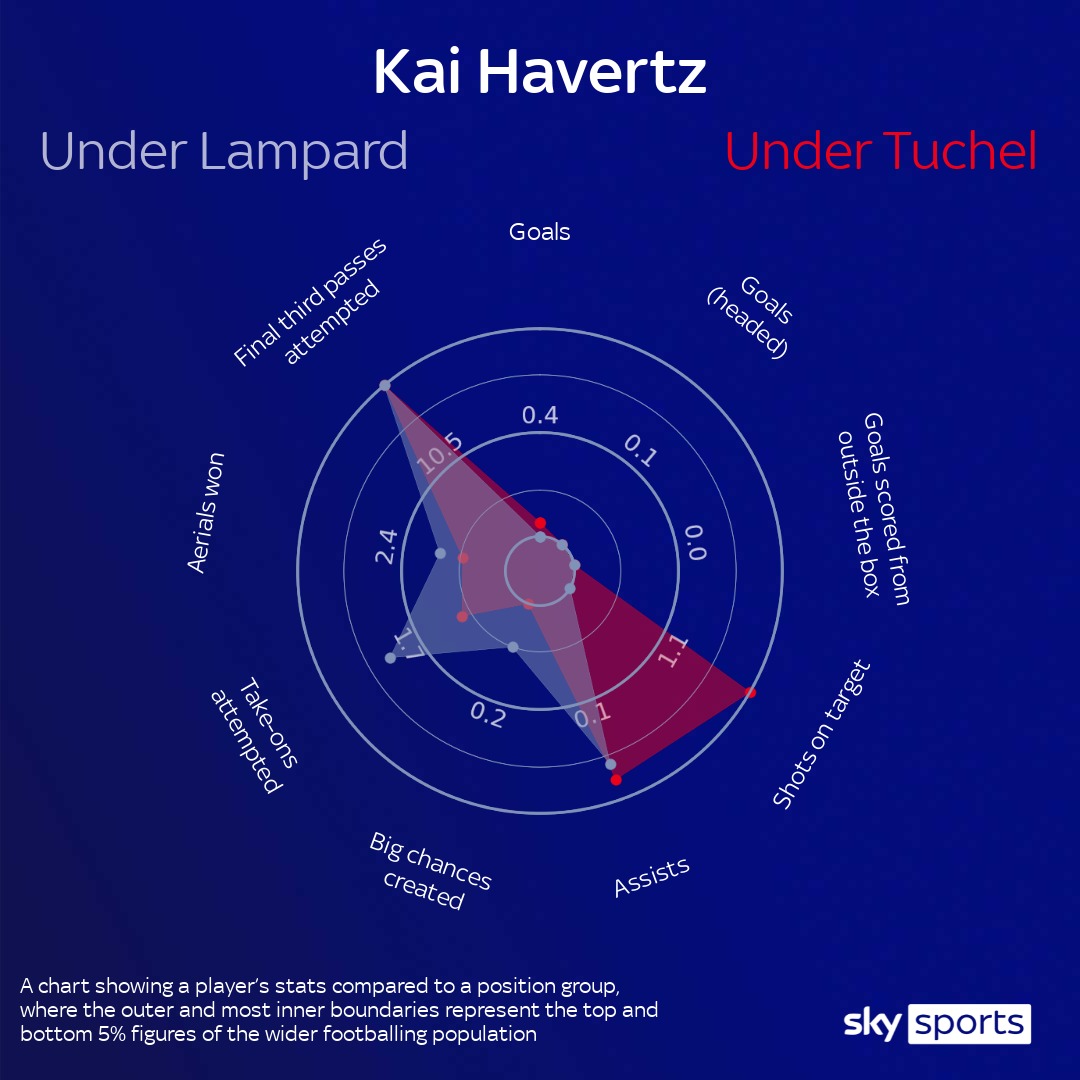 He finished the first half with the best passing accuracy of anyone on the pitch, an unusual statistic for a player operating in the final third, but then Havertz is an unusual player. He also covered more ground than any of his team-mates - running 11.39 kilometres.

This performance felt timely because there have been murmurings of late about his suitability for the role while the experienced Olivier Giroud sits on the bench and homegrown striker Tammy Abraham - still the team's top scorer - waits up in the stands.

But Chelsea's investment in Havertz is more than emotional, it is financially significant. Getting the best from the £62m summer signing is an obligation for the coach not an option. Tuchel has embraced that challenge and is beginning to reap the benefits of it.

Frank Lampard was never quite able to get to grips with that. There were extenuating circumstances for player and coach during those difficult first few months as illness and uncertainty clouded the issue. Havertz's position in this Chelsea side was far from obvious.

He was deployed everywhere from the centre of midfield to the wing, scrambling for form along the way without much success. Tuchel has brought some clarity despite his musings. "I would say he is between a nine and a 10, something in between," he explains. 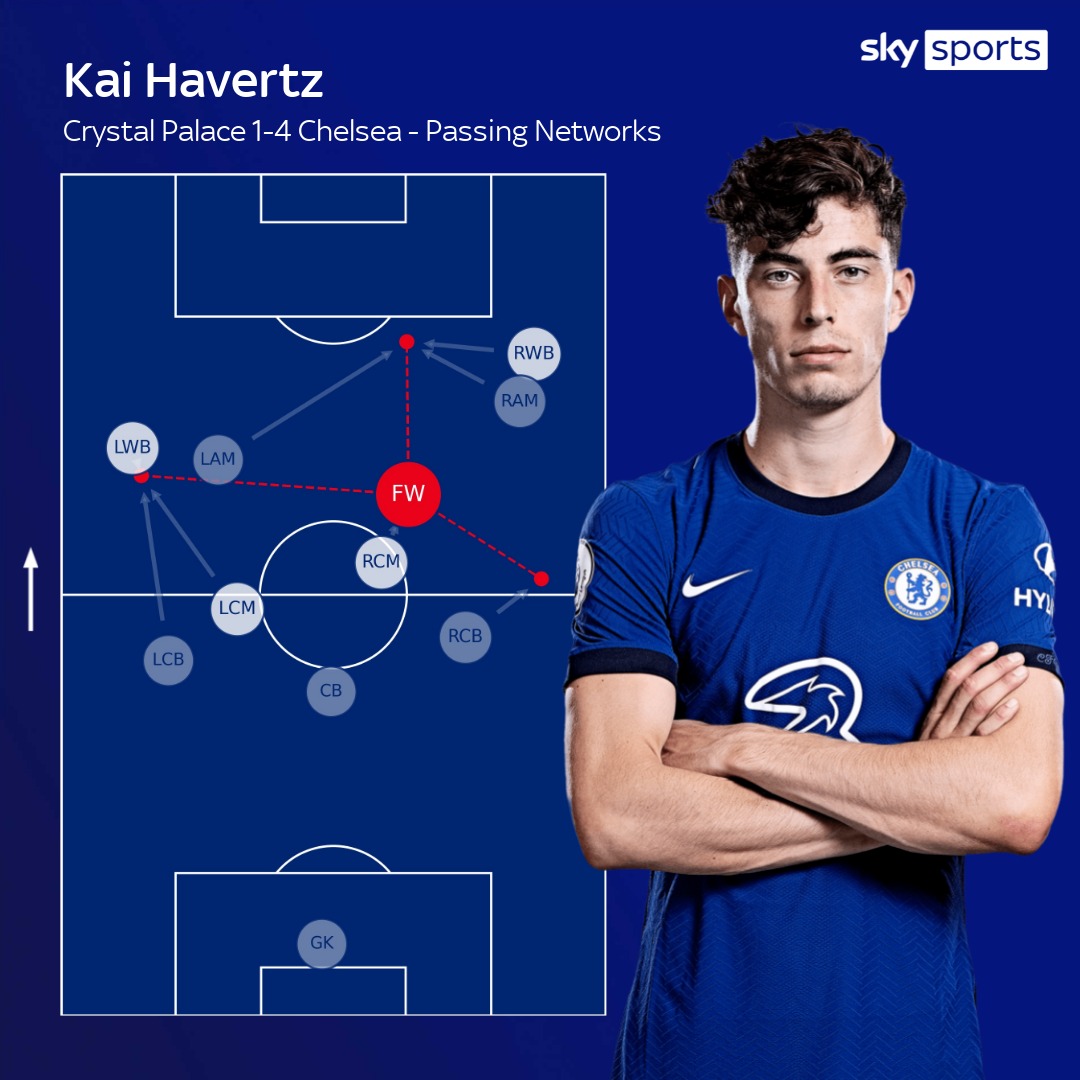 That is what he showed at Selhurst Park where he might have added to his first-half goal after the break, heading wide from Callum Hudson-Odoi's right-wing cross, before failing to beat Guaita from a central position when slipped through on his favoured left foot.

"I am not disappointed but he could have actually scored more," Tuchel told Sky Sports. "Two big chances right after we conceded the goal to finish the game off and to even score more. He has absolute quality and he needs to show his quality. This is a challenge for him."

Havertz agreed. "In my position, you always want to score," he told Sky Sports after the game. "In the last few months I have not had so many chances. Today, I had the chances. I could have scored one or two goals more. But, of course, I am happy."

He also spoke of enjoying having "the freedom to go everywhere I wanted to go" and that was evident in his performance, while still ensuring he was in the zones that matter. His nine touches inside the box was the most yet in his Premier League career.

Having established his best position, Tuchel also deserves credit for backing his man. The Chelsea boss acknowledged that Havertz was not at his best even as the team beat Porto in the Champions League in midweek. "We will not lose faith and trust," he added.

This was the swift reward for that faith but the consequences could be far-reaching. Speculation that Chelsea will move for a striker in the summer is unlikely to go away but Abraham's future must be in doubt now Havertz has shown that he can cover that role too.

Indeed, he is showing that he can thrive there. "After such a game it is easy to say that I am back to my best," he added. "I think I have to prove it in more games than only one but I will give my best, I will try to improve and I hope that I will continue like that."