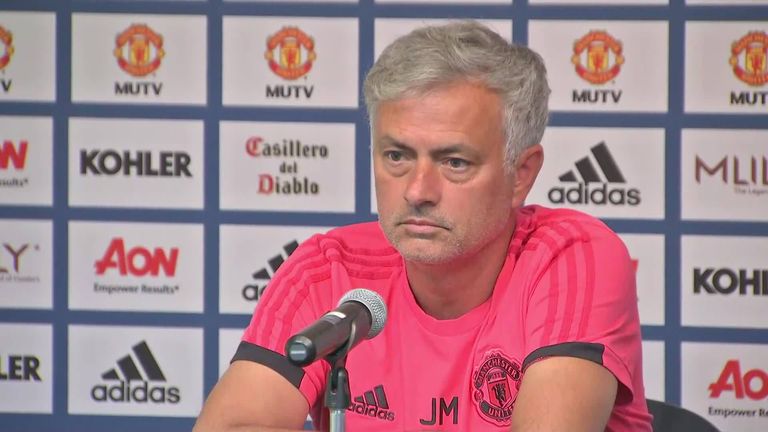 Manager Jose Mourinho says Manchester United will be at a disadvantage in comparison with other clubs when the new Premier League season kicks off.

United are currently on a pre-season tour in the USA but they are without the likes of Romelu Lukaku, Paul Pogba, Marouane Fellaini, Marcus Rashford and Jesse Lingard - who are relaxing after lengthy stays at the World Cup in Russia.

Ahead of Thursday's International Champions Cup match against AC Milan in California, Mourinho was asked if he was happy with how the tour was going.

"I have got good facilities, as always," he said.

"I have got incredible commitment of the people that are involved with the process of preparing a good pre-season.

Man Utd fans, watch every pre-season game live on MUTV. Only £7 a month with no contract

"I don't have the majority of the players that are going to be in the squad on the 9th of August, when the (transfer) market closes and we can make the squad official for the season.

"Of course I am not happy."

Asked if the other potential Premier League title contenders were not facing the same issues, Mourinho said: "If you look to the players Chelsea and Liverpool have in pre-season, especially these two teams but also Arsenal, I think if you compare, you see the difference of the situation.

"(Manchester) City and Tottenham are in the similar situation as we are."

Asked if he felt he had a squad who can compete for the title this season, Mourinho said: "I don't answer your question."

United open their Premier League campaign at Old Trafford against Leicester City on August 10, before travelling to Brighton on August 19 for their second fixture.

And Mourinho added: "When I look to Leicester, if I'm not wrong, only (Harry) Maguire and (Jamie) Vardy, were in the World Cup in the final phase.

"I think a team that is working for six weeks minimum, with only one central defender and one striker missing, it is clear how much better the situation is for them.