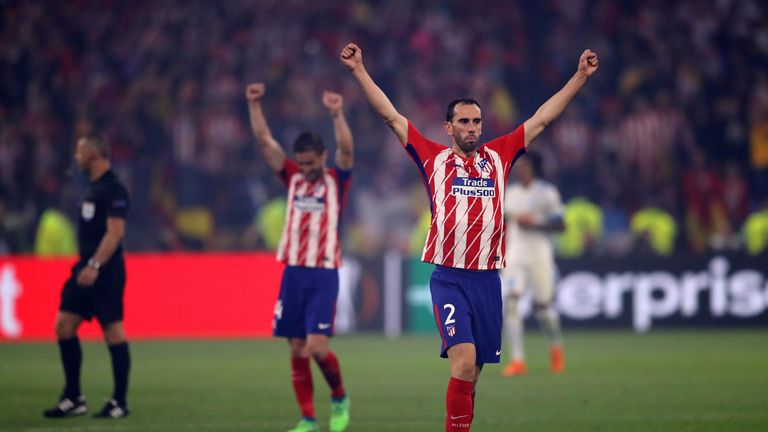 Diego Godin has agreed a new contract with Atletico Madrid following an approach from Manchester United.

Manchester United have failed in their approach for Atletico Madrid defender Deigo Godin, according to Sky sources.

Jose Mourinho is keen to land a central defender before the window closes on Thursday and had hoped that the 32-year-old Godin, who was named in the 2018 World Cup dream team after leading Uruguay to the quarter-finals, could be the answer to his problems.

But Mourinho's hopes were dashed after he was was told the Uruguayan international has agreed a new deal with Atletico.

Godin's agent approached United this week while Atletico were playing in Cagliari, saying the player was keen to come to Old Trafford.

Godin was heading into the final year of his contract at Atletico and United hoped to trigger the release clause in his contract, which is believed to be around £18m.

United were ready to pay Godin £8m per year in salary and put together an offer for the agent to take to the Atletico Madrid board.

However, within hours, Godin had signed a new contract on improved terms at Atletico Madrid earning him £6.75m (€7.5m) net a year - something Atletico are yet to formally announce.

Mourinho was keen on Godin but United believe the desire on the agent's part was always to leverage the situation to get a new contract.

When asked about potential transfers at Thursday morning's press conference, Mourinho said he was "not confident" of bringing anyone in before the 5pm deadline.

The Portuguese has made three signings this summer - Fred, Diogo Dalot and Lee Grant - but has so far been frustrated in his search for a centre-back.

Godin has spent the majority of his career in Spain, joining Villarreal in 2007 before moving to Atletico Madrid three years later and becoming an integral player, winning six trophies including the La Liga title in 2015 and two Europa Leagues.