Manchester United’s revival is clear but can Ole Gunnar Solskjaer now take the next step and win a trophy?

The seven years since Sir Alex Ferguson stepped down as Manchester United manager have been characterised by missteps, mismanagement and money wasted on a grand scale. But such is the behemoth that is the big red machine, trophies have still come their way.

David Moyes won the Community Shield in his first game in charge. Louis van Gaal plonked the FA Cup on the press-room table in his last. Jose Mourinho even had the opportunity to offer up a three-finger salute in reference to his first-season trophy haul at Old Trafford.

At another club, such achievements could and should be celebrated without any cause for consternation. The game is about glory, after all. But as those who have witnessed true greatness at Manchester United are prone to remind people, standards are different here.

Van Gaal's FA Cup win allowed him to leave with honour intact. Mourinho's Europa League triumph was an emotional one in the wake of the Manchester Arena bombing. Its significance must not be downplayed. Whether it ever felt like progress is another matter.

Ole Gunnar Solskjaer's side are beginning to offer the promise of something more long-lasting. Supporters recognise the signs of something stirring. A picture is developing of an exciting young team with pace and purpose in the final third. The invention is there too.

Bruno Fernandes' quality is obvious, his partnership with Paul Pogba encouraging. The emergence of Mason Greenwood adds a local flavour to what United are serving up. The front five looks as talented as anything around - and that is even before adding Jadon Sancho.

Question marks do remain over the defence but there is a sense that the hardest part has been done. Lessons from Liverpool are always learned with great reluctance down the M62 but the impact of Alisson and Virgil van Dijk suggests United might not be too far away.

This is the backdrop as Solskjaer prepares to resume the club's bid for silverware in the Europa League when they host LASK on Wednesday evening. The tie is a formality given United's five-goal lead from the first leg but the competition itself offers opportunity.

In a recent interview with Sky Sports, Solskjaer acknowledged the importance of winning things at Manchester United but made it clear that his approach would be process-driven.

"We have not won any trophies," the 47-year-old Norwegian told Sky Sports. "But success going forward is to keep improving the team, keep developing, because it is not the destination that is the measure of success, really, it is what we do.

"With results, you can't always say that life is fair, because it isn't. Sometimes you do not get the result you deserve in football, but if we keep doing the right things, improving every single day, then we will end up hopefully as a successful Manchester United team." 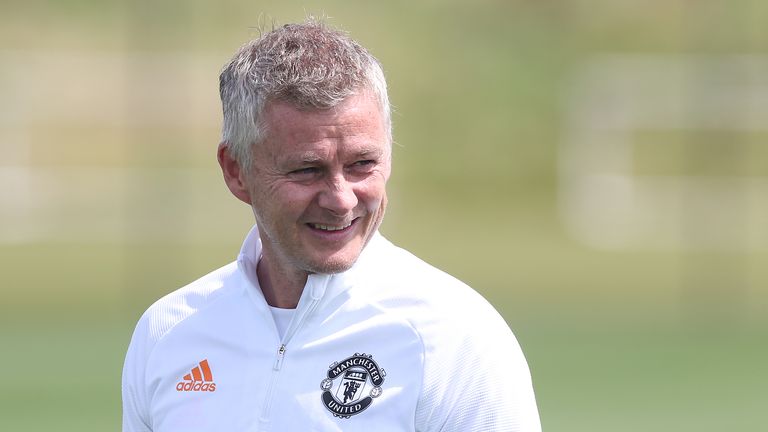 We have not won any trophies. But success going forward is to keep improving the team, keep developing, because it is not the destination that is the measure of success, really, it is what we do.

It is an admirably philosophical approach and he is right, of course. United's form since Fernandes' arrival in January suggests this is meaningful progress, transformative even.

The team's recent 19-game unbeaten run is the sort of form that, if carried into next season and sustained, would put Manchester United back into contention for the biggest prizes.

They are the only unbeaten team in the Premier League since February. The team with the most points in that period - more even than Manchester City and Liverpool. Expect renewed purpose from the top two but United can certainly take heart from that record.

All that remains is a trophy and the celebration that comes with it; the belief with which this can be imbue a group of players and the taste it can give those same players for more.

The Europa League draw has been kind to United. They face a quarter-final tie against Istanbul Basaksehir or FC Copenhagen. Optimism should be the overriding emotion.

For everyone from captain Harry Maguire to the precociously gifted Greenwood, this would be the biggest trophy win of their careers with the prospect of a UEFA Super Cup to look forward to next month as well.

But it comes with expectation.

United are already favourites to win the Europa League. Just as they were, briefly, to win the FA Cup when Arsenal eliminated Manchester City in the semi-final. Instead, they followed them out of the competition. The only game that they have lost in the last six months.

Such one-off defeats can always happen. A chance spurned here, a David de Gea error there. But Solskjaer will be anxious to avoid another cup disappointment. Such unanticipated exits can scupper a team's momentum, obscure the improvement and shake their belief.

Their form deserves to be rewarded but they need to finish the job if they are to go into the coming campaign with spirits sky high.

"We have achieved nothing so far," said Solskjaer before securing a top-four finish. That is now safe. The Europa League, and the trophy success that would hint at so much more, awaits.