Hakim Ziyech faces late fitness test to be part of Chelsea's squad against Manchester City at Stamford Bridge on Sunday, while Reece James remains out with a hamstring injury; Match is live on Sky Sports Premier League from 4pm

Frank Lampard says he expects Chelsea's match with Manchester City to go ahead, while two members of the club's staff have tested positive for Covid-19 this week.

Pep Guardiola has confirmed that City will be without five players for Sunday's Premier League trip to Stamford Bridge because they are all self-isolating after returning positive coronavirus tests. Gabriel Jesus and Kyle Walker were confirmed on Christmas Day as being two players who tested positive.

City reopened their training ground on Wednesday after a temporary closure due to a "number of positive cases" which led to the postponement of their match with Everton on Monday.

Lampard said: "I am aware of the (Manchester City) situation. At the moment, the game is on. Man City have had problems at their training ground, we've had a couple ourselves but not the playing staff."

The Chelsea head coach revealed the two positive cases from staff members came from this week's round of testing.

When asked about whether he was in favour of a two-week circuit break, Lampard said safety should come before football.

"We are in a protected environment," Lampard added. "We are being tested twice a week. I don't know why we went down to one. Two is important.

"It seems to be the situation is we go game-by-game. The games called off have been because of positive tests around that game. We'll see how it goes. 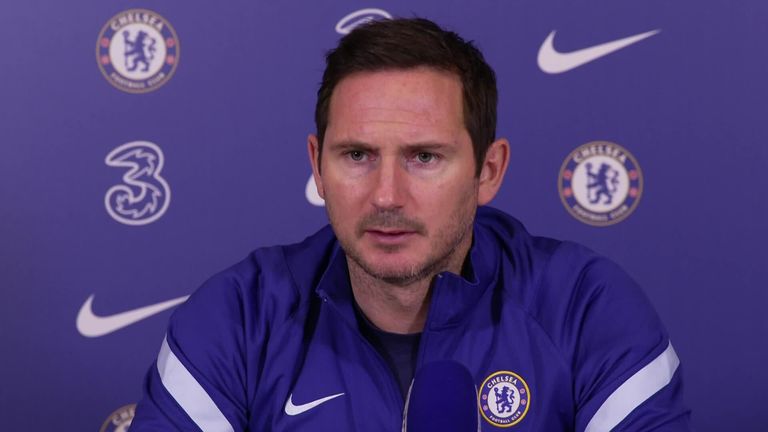 "I understand it (playing on) but safety has to be paramount. The fact that I said we have a couple of staff [who tested] positive... they have babies, parents, friends, sisters, brothers and grandparents.

"They come here and go to work and then they go home. We are in another surge of Covid which appears to be more contagious, or it is. Safety and security is paramount, as opposed to keeping up the nation's spirits up. That might not be a nice thing to say - we enjoy watching our football - but safety and health have to come first.

"We had it (a break) before in March. The Premier League and clubs have done everything they can to make the environment as safe as possible. As we're finding, it is not always easy to do.

"When you go home and the numbers are going up, particularly in London where we are... it is down to the authorities, the government and the Premier League. I don't know but if you're told to stop, you stop."

Chelsea forward Hakim Ziyech returned to full training this week after picking up a hamstring injury in the 3-1 win against Leeds on December 5 but may not be ready to make a return against Man City on Sunday.

Lampard confirmed the Morocco international is nearing full fitness but Sunday's game may come too soon, while right-back Reece James remains out after missing the 1-1 draw with Aston Villa on Monday.

He said: "He (Hakim Ziyech) is fit to train. He has trained the last two or three days. I need to make that decision whether he is fit to play. Reece James is out - he has a small hamstring strain."

Chelsea go into the game level on points with Guardiola's side, despite winning just one of their last five Premier League games.

"It's a game we want to win against very good opposition," Lampard added. "They are going to be there or thereabouts. To be up there with him despite our recent run of form in the last few games is a plus and it's an opportunity to win a game against a competitor.

"We need to be at our best to win. In terms of their weaknesses? I don't see it. They are a very strong outfit; very well managed, they have threats in attacking areas. We need to focus on ourselves. If we're at our best, we can make weaknesses against any team."