Thomas Tuchel discusses the importance of Mason Mount, attacking struggles and defensive improvement plus a vital game against Arsenal and the Champions League final; watch Chelsea vs Arsenal live on Sky Sports Premier League from 7.30pm on Wednesday; kick-off 8.15pm

Every manager wants to put a strong marker down at a new club. This was true when, in Thomas Tuchel's first game in charge at Chelsea at the end of January, Mason Mount started on the bench. Was this the first sign of Tuchel's changing of the guard?

In Frank Lampard's two-and-a-half seasons as a coach at both Derby and Chelsea, Mount had become his ever-present, his protegee, his go-to guy. Gareth Southgate had followed suit for England too, but Tuchel opted for a touch more experience across the board for his maiden outing, although it was Mount who grabbed the headlines.

The result was a defensively astute 0-0 draw against Wolves, but with creativity lacking and more time to work with Mount on the training field, Tuchel soon began to tread the well-worn path as the 22-year-old slotted seamlessly into the head coach's regular starting XI. Mount was again the main man.

Four months on, the midfielder continues to shine under Tuchel. Mount has scored the most Premier League goals under the German (4), created the most chances (30) and is joint-second for assists (2). In the league overall this season, he is second for chances created (78) and final third passes completed (602).

You can continue to reel off the stats of just how much of an impact Mount has had, and Tuchel sees no ceiling on how much his midfielder can achieve in his career.

"There are no limits. He has the full package," Tuchel exclusively told Sky Sports ahead of Wednesday's Premier League game with Arsenal.

"He is incredibly talented and even more importantly, he has the personality at a very young age to keep his feet on the ground, to arrive every day at Cobham with a smile on his face. Mason is simply happy to be out there on the pitch and playing football. It doesn't make a difference if he is playing short-sided games, or four against four or if he plays out there in boxes.

"It's what he would do if he was not a professional player, he would be in the park and would do the same stuff and I have a feeling he is very aware of how he arrived at this point in his career. It makes him very self-confident, it makes him appear very humble and very hungry to learn and these are the big circumstances to have a big career.

"He is crucial for our game, he is an absolutely key player and he deserves all the support that we give him."

But while Mount has impressed in attack, Chelsea have struggled with goal conversion in recent months. Chance after chance passed them by in their Champions League semi-final second leg against Real Madrid. Of their 15 shots, only five were on target - two of which were goals - while eight ended up being off target.

"But we never lack intensity, we never lack chances, we never lack touches in the box and it might be boring, but we focus on that to increase these numbers and to create more and more chances, maybe higher quality chances, higher frequency.

"We have lots of talent, but we are still young, there is still room to improve and our players arrive rarely in a relaxed way. When they have chance, most of the time, they put in a huge physical input to defend. They have their part in defence and we don't point the fingers at them if they don't score."

Defensive improvement: 'We work on it maybe five per cent'

While the attack may need some time to click, Tuchel seemed to instantly revolutionise Chelsea's defence. Clean sheets were kept in his first three Premier League games, with 19 in 25 games across all competitions since.

Tuchel switched to a back three, with Antonio Rudiger, Andreas Christensen and Cesar Azpilicueta the most regularly deployed players - a trio who were not assured of their starting spots under Lampard. Combinations of Reece James, Marcos Alonso and Ben Chilwell now play as wing-backs. 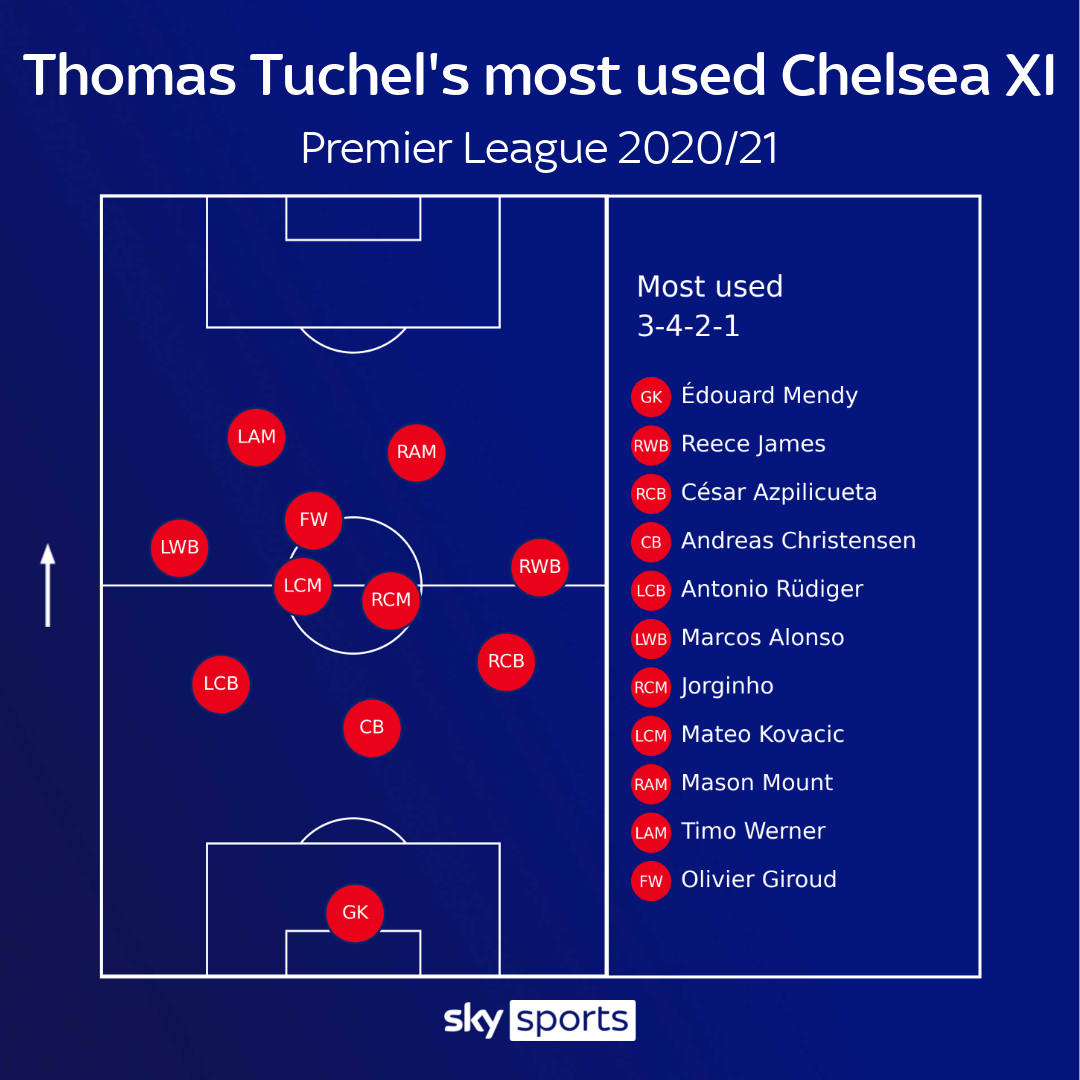 Edouard Mendy also continues to impress in goal - recently named in Gary Neville's team of the season on Monday Night Football - and Tuchel gives all of the credit to his players.

"We work maybe a maximum of 10 per cent on it, maybe only five per cent in training time. For me, in isolated situations, football is a complex game and you try to reflect these views on the game in training.

"We train in complex exercises, we try to train everything and we try to let the players find solutions out there on the pitch, either in training or in games.

"But of course, we have certain principles in how we want to attack and how we want to defend, but the praise is all for the players because when we were doing our defensive work on the pitch, we always have a huge team effort and everybody was involved.

"We were very courageous from the very first minute of our first match together and that was a fantastic base to start an incredible record. Now everybody is very self-confident and we are, in the moment, very happy with our performances."

'We have wins against City, but final will start from scratch'

Although there is still a Premier League campaign to finish and an FA Cup final on Saturday against Leicester, it's hard to ignore the giant on the horizon - the Champions League final against Manchester City.

Chelsea were 2-1 winners at the Etihad on Saturday, eyes trained on the match for indications of how the European showpiece could pan out. The victory was enough for Chelsea to once again deny City, having knocked them out of the FA Cup a few weeks previously and ending their hopes for an unprecedented Quadruple.

Guardiola vs Tuchel has become the managerial tussle de jour too. In their last four meetings in both Germany and England, Tuchel has only lost once on penalties in the German Cup. With such results, does he have a method to prepare for Pep?

It says something about the club that they’ve built a huge women’s team, they’ve built a very competitive squad like what you expect when you see anybody in a Chelsea shirt doing sports, you expect them to play to win, to take it seriously, to challenge and to push the boundaries and challenge every competition possible. This is what everybody expects from every team and the women’s team have clearly fulfilled that task this season so big congratulations to them. They are also the [WSL] champions now, which is also an incredible achievement and hopefully we can win both finals together.

"We try to analyse his team as we analyse all our opponents," Tuchel explained. "We watch the last moments but on one hand, you have a clear picture because he has been there for five seasons now and he has implemented a style that you instantly recognise when you switch your TV or laptop on, you can see after two or three minutes when you jump into a match, what their plan is, how they play and so many principles.

"I think he could wake his team up in the middle of the night and they would start playing like this.

"But it's one thing to understand the pattern and another to observe the patterns and identify the patterns, but it is a completely different thing to play against, you have to find solutions for it. This is what it all is about. You can present solutions but in the end, the players who do the work on the pitch and need to try and fulfil them, find the solutions and then need to be confident.

"To arrive in the final now with the two wins against City in our hands, it gives us a lot of genuine confidence. This is the most important to play against Pep's team is to play confident, to have the experience of beating them but we know very well that it starts from scratch. We have zero advantage, the Champions League final is a very unique game in very special surroundings and we have to start from zero. But we will arrive wherever we will play to win the game.

"There's no better way to finish the season than with two finals. I already know that I will absolutely enjoy this last week of the season when the regular season has finished and you are there for one more week to come to training and you're very well aware that there is only you and one more team to arrive in this very last match in European competition.

"It is fantastic and it is all you dream for as a player and a coach. But at the same time, we have not won it. The job is not done and we work for a club that is about winning and we absolutely do not want to participate in the final, we want to win the final and at the same time, end up in the top four. These are the challenges and they are not fulfilled."

Finding the focus for Arsenal

To use the old football cliche, it is one game at a time for Chelsea as they continue to build on their steady progress. Next up - Arsenal at Stamford Bridge, live on Sky Sports.

A top-four finish remains firmly in Chelsea's grasp too - another route to Champions League football next season - and Tuchel says refocusing on each new challenge is now part of their season.

"It was even hard for me to be fully focused when we arrived in Manchester the day before [Saturday's game], because there were only two days in between, so at some point, I learnt that sometimes you have to accept that you don't have the same excitement, you're not fully charged yet, even when you arrive the day before.

"It feels totally different when you have three days in between to recover, like we have now, but the things we demand are fully separated from the environment and the competition we play in.

"It's absolutely no concern if we do it in the FA Cup, the Champions League or the Premier League. This is what you wish for as a coach, that the team lives up to it in a very incredible way and that's why I'm so happy.

"Tactically, we're not sure what to expect [against Arsenal]. It could be a back four or a back five, Arsenal have done both so in the moment when you're not so sure what the opponent is doing, it's the moment to focus on ourselves again. Talk with fitness coaches, the medical department on whom we can rely, find a good squad and got out there tomorrow evening and do it again."

Chelsea will be hoping their determined resilience and winning confidence will see them through these last two-and-a-half weeks, which will define their season. Should Tuchel achieve each of the tasks ahead of him, it would be an incredible achievement and an ominous statement of intent for his first full Premier League season.