'Unfortunately I am not good enough to decide [between PL and CL]! I have to take what I can get. That is how it is'

Jurgen Klopp says he is not “good enough” to decide whether he will prioritise winning the Premier League over retaining Liverpool’s Champions League title this season.

The German manager won his first European title last term with victory against Tottenham in Madrid after the Reds had finished one point behind domestic league champions Manchester City.

Liverpool have not won the league title since 1989/90 but Klopp is refusing to designate any specific targets at an embryonic stage of the campaign, ahead of the Super Cup match against Europa League winners Chelsea in Istanbul on Wednesday.

"Unfortunately I am not good enough to decide that! I have to take what I can get. That is how it is," Klopp, whose side began the league campaign with a 4-1 victory against Norwich, said.

"We didn't decide last year that we would go for the Champions League and ignore the Premier League obviously so we just try to win the next football game.

"That is [Wednesday] night and that is difficult enough. I am not a genius so I have to take what I can get.

"Last year thankfully we won something, celebrated it, so now let's carry on." 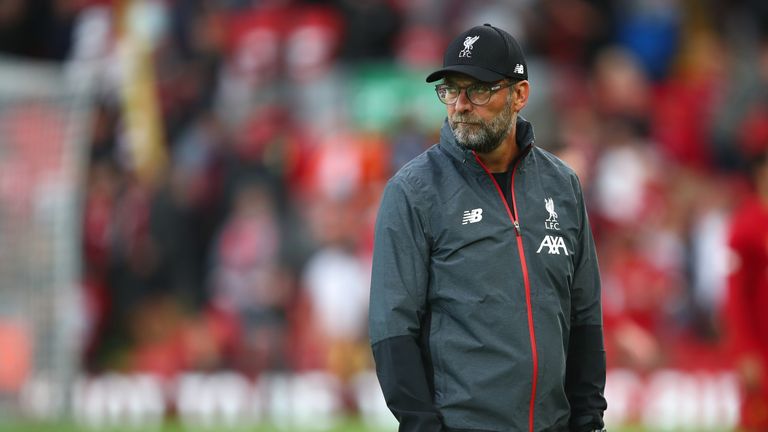 I am not a genius so I have to take what I can get.

The meeting with Chelsea marks a return to the city in which Liverpool memorably won European football's premier club competition in 2005 with victory against AC Milan.

"I know about the special importance of Istanbul and what a special place it is for every Liverpool supporter. 2005, nobody will forget it," Klopp said.

'Chelsea are an interesting team with good plan under Lampard'

Liverpool are viewed as pre-match favourites to defeat Chelsea, who suffered a heavy 4-0 defeat in Frank Lampard's competitive bow as head coach, and Klopp believes the loss was not reflective of their performance.

"I didn't know everybody expected us to win! No problem what people think around us," he said.

"We respect Chelsea a lot. If you saw the game against United and if you only saw the result you would have no idea how the game was. They played a good game.

"They are a really interesting team, with a good plan. Frank did an outstanding job last year [at Derby], changed the football there. Now he is at Chelsea - his club - everything is fresh.

"It is the first title they can win together. They will be 100% ready and we have to make sure we are ready as well be.

"Everything that doesn't help you in the game we have to ignore and that's what we do, actually."

'Wait and see on Lovren'

Dejan Lovren was not included in the travelling squad and Klopp insists the defender's absence is illness-related rather than transfer-based, with Roma in talks with the Reds over a deal, Sky Sports News understands.

Asked whether why the 30-year-old centre-back would not feature, Klopp said: "It's because he is ill.

"We will see what happens in general, not just in this window."

Adrian will make his full Liverpool debut in the absence of injured Alisson and the Spaniard has been backed by Virgil van Dijk to prove his quality.

The 32-year-old arrived at Anfield last week on a free transfer, replacing the departed Simon Mignolet, and the former West Ham goalkeeper has an opportunity to make a quicker than expected impact at the Reds.

Alisson sustained a calf injury during the first half of Liverpool's league victory against Norwich, with Klopp confirming the Brazilian will be absent "for the next few weeks", and Van Dijk has full confidence in his new team-mate.

"Adrian has been in for his second week," Van Dijk said. "Since then, we have been working day in, day out.

"It is good for him that he is playing straight away. It is not the situation though that he would hope for - that he would come in after Alisson gets injured.

"He is experienced enough to go out there and show his qualities. He has plenty of qualities. He played so many years in the Premier League and you can already see in training how good he can be.

"He needs our support as we defend together. He needs us and we need him as well. He will definitely do the job."