There were 87 minutes on the clock at Villa Park when Sadio Mane shifted the ball onto his weaker foot, spotted Andrew Robertson's run towards the far post, and lifted a pinpoint cross directly into his path.

The left-back met it with an emphatic header, cancelling out Aston Villa's opener, and three minutes later another moment of inspiration from Mane completed the turnaround. This time, he scored the goal himself, deftly flicking home Trent Alexander-Arnold's corner to spark wild celebrations.

Liverpool now sit 25 points clear at the top of the table. Their Premier League title triumph became a formality long before it was delayed by the coronavirus outbreak. But the season might have turned out differently had it not been for that comeback in the West Midlands in early November.

That day, Liverpool were heading towards a deflating defeat which would have cut their lead to three points ahead of the following weekend's clash with Manchester City. Instead, thanks to Mane's heroics, they went into that game on a high, their six-point cushion intact. Pep Guardiola's side were duly beaten 3-1. There would be no way back for them.

It was not the first time Mane has made the difference for Liverpool and it would not be the last. In the last two months of the season alone, there have been winning goals against Bournemouth - a cool finish from Virgil van Dijk's pass - West Ham - a poacher's effort from close-range - and Norwich - a stunning strike with his weaker foot after coming off the bench.

Those victories, together with the comeback at Villa Park in November, are just four examples of the 14 Premier League games Liverpool have won by a one-goal margin this season. It's a record which owes a lot to their defensive resilience - few sides are better at holding onto a lead - but it owes even more to Mane's game-changing brilliance.

He has scored 14 goals in the Premier League so far, two fewer than team-mate Mohamed Salah, but his goals tend to matter more. In fact, they have won Liverpool 18 points over the course of the season - eight more than the Egyptian's and two more than any other Premier League player.

Throw in his seven assists - only Alexander-Arnold has provided more among Liverpool players this season - and Mane has had a direct hand in 32 per cent of Liverpool's goals. It is an increase from 26 per cent last season and 20 per cent in the campaign before that. Mane, in other words, has become more important to Liverpool than ever.

For their opponents, it has become increasingly difficult to stop him.

Mane is at his most dangerous when flying down Liverpool's left flank, but he has technical ability and intelligence to match his athletic prowess and he can score all kinds of goals too. Since the start of last season, there have nine with his weaker foot and eight with his head. Mane stands at just 5ft 7ins, but he is excellent in the air and has that rare knack for being in the right place at the right time.

His completeness extends to his off-the-ball work too. When he's not hurting opponents in the final third, he is pressing defenders feverishly and tracking back to protect his full-back. This season, he ranks among the top six Premier League forwards for both tackles and ball recoveries.

His value to the side has long been apparent to everyone at Liverpool - "Since his first day he was an incredibly important player," said Klopp in December - but it is perhaps only in the last 18 months that he has usurped Salah as their main man and received the wider recognition he deserves.

Atletico Madrid certainly went to great lengths in order to throw him off his game in the first leg of their Champions League last-16 tie at the Wanda Metropolitano stadium last month, getting under his skin to such an extent that Klopp was forced to take him off at half-time. "He was targeted," said the Liverpool boss afterwards. 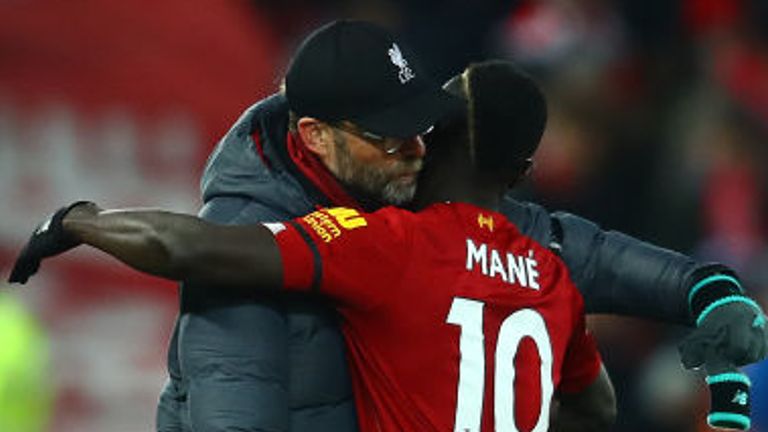 Sadio has been outstanding for a long period of time now. He’s a fantastic person off the pitch, he dedicates his life to football

Diego Simeone knew that he could stop Liverpool by stopping Mane and his influence is certainly not lost on Klopp either. In December, after the 27-year-old had finished fourth in the Ballon d'Or voting, he described him as a future winner. "If he stays healthy, he will have an incredible career in front of him and he can climb that table," he said.

Lionel Messi, last year's winner, feels the same way. "It's a shame to see Mane finish in fourth place," he said after collecting the prize. "I chose him because he's a player that I like. Mane achieved a great year and was exceptional for the Liverpool team. That's why I chose him."

Compliments do not come much bigger than that - "This is kind of like being crowned by the king," said Klopp at the time - but Mane is getting used to the adulation now. He is Liverpool's match-winner, a world-class talent who has hit new heights for a side on the brink of history.