The defender speaks exclusively to Sky Sports about football's duty in the fight against racism, Liverpool's transformation under Jurgen Klopp and why his critics only make him stronger

On Monday, Liverpool became the first Premier League side to take a knee in support of the Black Lives Matter movement. It was the defining image of football's response to George Floyd's death in police custody and, according to Dejan Lovren, it carried a powerful message.

"I felt we needed to do it," the centre-back tells Sky Sports. "What happened in America is unacceptable. We are all equal and we wanted to share it to the world. We did it and it's unbelievably great that people are getting this message. Everyone should be treated equally."

The world of top-level football can be an insular environment. Players have often shied away from speaking out on social issues. But they have been united in their response to the recent events in America.

There have been tributes and messages of defiance from up and down the Premier League. In Germany, Jadon Sancho revealed a 'Justice for George Floyd' T-shirt after scoring for Borussia Dortmund against Paderborn. When you do something, some people will judge you and say 'stick to football' and things like that, but I don't agree with that

Lovren, who grew up as a refugee after his family were forced to flee war-torn Yugoslavia when he was three years old in 1990, is heartened by what appears to be a growing social conscience among players today.

"It's not only about how you perform and scoring goals," he says, speaking to Sky Sports via video call. "I think you should use your platform, especially when you have millions of people who are following you.

"I want to be recognised also as a man who is spreading love and positivity. I'm looking at myself and it's like I have a duty. Sometimes it's positive, sometimes it's negative, but I will not stop with it.

"It's not about showing off what you have or anything like that. It's about doing good things around the world.

"I know when you do something, some people will judge you and say 'stick to football' or things like that, but I don't agree with that.

"We are all humans and we all have interest in some other things. The main focus is always football, of course, but if you can say something positive and push somebody else to think about something differently, to help others and to put out the message that we are all equal, then something good will come from it - especially in this moment of crisis."

A loyal servant to Liverpool

Listening to Lovren, it is easy to understand how he has become such a valued presence in the Liverpool dressing room. The 30-year-old is one of the club's longest-serving players having arrived from Southampton in 2014, and while his playing time has reduced since the signing of Virgil van Dijk and the emergence of Joe Gomez, his commitment is unchanged.

"It has been a test for me," he says. "But in these moments, I think you should stick with the team even more, to show your quality even if you are not on the pitch with the first XI. The next day in training, you should give everything, just to respect your team-mates.

"Of course, it's not the happiest moment when I see myself on the bench, but it's the decision of the manager. I respect it and I am always the guy who will work 200 per cent behind closed doors. It's just part of football. If 20 players could play, it would be nice, but there are only 11 places. Whoever is in the best shape will play and that's fair enough."

It is an admirable attitude for a player who has had to cope with more than his fair share of criticism over the years. Lovren is a Champions League winner with Liverpool and a World Cup finalist with Croatia, but it's his errors rather than his achievements that tend to attract headlines. 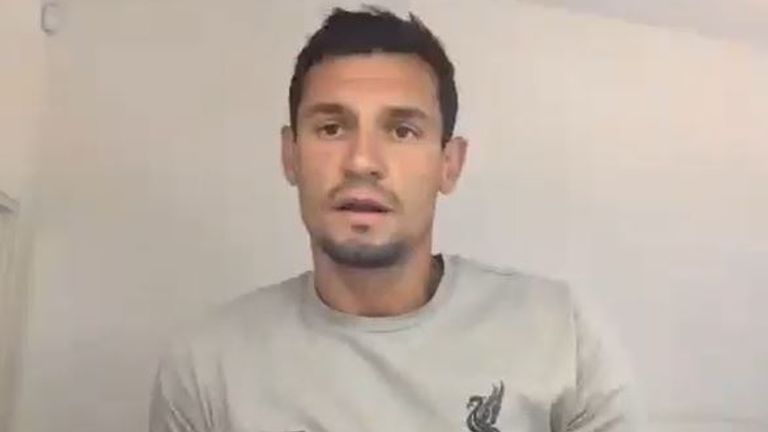 My biggest critic is me. I can see when I perform well or not, it's as simple as that. I don't need somebody to tell me

It has been that way since he joined French side Lyon, where fans and journalists baulked at the £8m fee paid to sign him from Dinamo Zagreb in 2010 - "they didn't respect me in a player," he said in one interview - and his critics have continued to jump on his missteps at Anfield.

As recently as February, in the wake of Liverpool's 3-0 loss to Watford, Jurgen Klopp was forced to come out in his defence. "If anyone blames Dejan Lovren for our defeat," he said, "I cannot help these people." Lovren, meanwhile, is philosophical on the subject.

"Listen, it's always like real life," he says. "Sometimes it's positive, sometimes it's negative. But you must always stay true to yourself. You know what you are doing behind closed doors. You are working your everything off. But at this level it's normal to be exposed to criticism.

"To be honest, I'm not too bothered. If I feel criticism, it will be first from the manager. But my biggest critic is me. I can see when I perform well or not, it's as simple as that. I don't need somebody to tell me. I don't read a lot of newspapers or listen much to the pundits.

"It is what it is. It's football and we have to deal with it. Some players can't do that and they go inside themselves, but accepting it is important. The criticism will just make me stronger. It has always been part of football and it always will be part of football."

Liverpool have come a long way since Lovren's arrival at Anfield.

His first two seasons ended in sixth and eighth-placed finishes, but the transformation under Klopp has been spectacular. Liverpool, already reigning European champions, now stand on the brink of Premier League glory ahead of football's return.

"When I came, the club was always big - it was always Liverpool Football Club - but we didn't play well," says Lovren. "People saw us winning against Manchester United and Manchester City, but then in the next game we would just fail. It wasn't acceptable. When you are a big club, everyone expects you to play well in the small games too."

Lovren puts their improvement down to a change of mindset. It's something, he says, that Klopp drummed into the players right from the start of his tenure. "He came in and said, 'Guys, I want you to think positively, to believe in yourselves. Without belief, we can't do anything.'"

Klopp instilled what Lovren describes as an "animal mentality" in the squad.

"We do not stop," he says. "Even when we are at our best level, he sees that we can improve more. He had a whole picture already in his mind, he just missed a few pieces. So he bought Alisson, he bought Virgil, then it just clicked. He has done an amazing job."

Lovren can see the change not just on the pitch and in the dressing room but in every area of the club. "When I look at the organisation of the club, wow, it has changed unbelievably," he says. "I can only say well done to the manager, well done to the owners and well done to all the people who are working at Liverpool Football Club."

There have been difficult moments along the way but there have been highlights too. On a personal level, Lovren will always treasure the memory of his dramatic, winning goal in front of the Kop in Liverpool's Europa League quarter-final win over Borussia Dortmund in 2016. But last year's Champions League success eclipses all else.

"It's something I always dreamt of and I can also say that for the lads and for the manager," says Lovren. "The first time we reached the final, when we lost against Real Madrid, he told me, 'Don't cry. Imagine how I feel after losing six finals!'

"He always said we would get another chance and we did."

More glory and next steps

Liverpool are now within touching distance of what would arguably be an even more significant achievement. Their first title in three decades could even be sealed with victory over Merseyside rivals Everton at Goodison Park in their first post-lockdown game of the Premier League season.

But while Liverpool and Klopp will hope they are laying the foundations for a new footballing dynasty, for Lovren, who turns 31 next month and only has one year remaining on his contract, the future is less certain.

"Winning, for me, is like a drug," he says. "When we won the Champions League, I didn't play but I felt so happy and proud to be part of the team.

"But in some moments, of course, you also think to yourself that you want to play. It's not the greatest moment when you don't, but I have a mentality that is focused.

"I'm always ready. If someone is injured and coming off, I'm ready to step in and show my quality. I think I proved that last season, when Joe Gomez or Joel Matip were injured and I came in and played.

"My goal is to play and to win as many trophies as possible. But at the moment the focus is just to win the next two games and be champions. After that we will see what happens."