How Dennis Bergkamp scored his Arsenal wondergoal at Newcastle

Take a look back at the 2001/2002 Premier League Goal of the Season contenders in the video below, including iconic goals from Dennis Bergkamp, Trevor Sinclair and David Beckham

Sky Sports' Peter Smith looks back at Dennis Bergkamp's moment of magic at Newcastle in 2002 and how he scored that iconic Arsenal goal...

"You will not see many goals like that, it was an unbelievable goal," purred Arsene Wenger after Dennis Bergkamp's flick, swivel and finish at Newcastle in March 2002. Eighteen years on, we're still yet to witness anything like it.

Voted as the best solo goal scored by an Arsenal player in the Premier League era by the club's supporters, Bergkamp's invention at St James' Park summed up the creativity, flair and impact the Dutchman had during his 11 years with the Gunners.

But it wasn't just the beauty of the move. The goal was also a key moment in Arsenal's pursuit of the Double. "You are blessed to see that when you come to a stadium," Wenger reflected later. "It was not only a magnificent goal but a very important one. I enjoyed it a lot." "It was not only a magnificent goal but a very important one. I enjoyed it a lot."

Arsenal had travelled to the north east to take on their fellow title challengers with the chance to go level on points with Manchester United at the top of the Premier League.

However, with 11 injuries to contend with, including the absence of star striker Thierry Henry, and midweek Champions League exertions against Bayer Leverkusen likely to take their toll, the Londoners travelled in hope rather than expectation of earning revenge for the 3-1 humbling they'd suffered at home to Bobby Robson's side three months earlier.

Newcastle, after all, were second in the league. They may have been missing the pace of injured Craig Bellamy but Alan Shearer was on course for another 20-goal haul and had back-up defenders Igor Stepanovs and Oleg Luzhny in his sights.

Under the cosh from the first whistle, Arsenal needed some inspiration. A moment of magic to turn the tide. Step forward Bergkamp.

The Dutchman had produced an exquisite lobbed goal in the Champions League just days earlier, but his strike at St James' Park is firmly established among the best ever seen in the Premier League.

Patrick Vieira won back possession deep in his own half with 11 minutes on the clock and fed his No 10 in the centre of the pitch. Bergkamp calmly shuttled the ball to Robert Pires on the left wing. The Frenchman advanced and then spotted his team-mate's dart towards the Newcastle box. He pinged the ball back in-field.

"I want the pass from Pires to my feet, but it comes behind me," recounted Bergkamp in his autobiography, Stillness and Speed. "It's not what I expect, so I think: I need another idea here."

Backed up by Newcastle defender Nikos Dabizas, Bergkamp's options appear limited. But, as so often throughout his career, he saw an opening few others could. 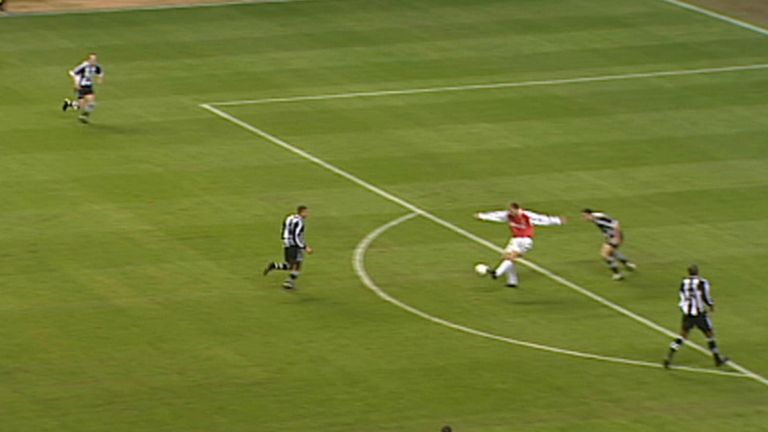 "Ten yards before the ball arrived I made my decision: I'm going to turn him."

"I know the defender is stepping in and the pace of the ball can help me. Ten yards before the ball arrived I made my decision: I'm going to turn him," wrote Bergkamp.

With a glance of his left boot he sent the ball spiralling around Dabizas. A pirouette took Bergkamp past the defender on the other side. Grace was followed by strength, as the Arsenal man held off Dabizas' desperate attempt to recover, before Bergkamp coolly slotted a right-foot shot past Shay Given into the far corner.

The celebration - a high-five and a fist-pump - was understated, given the sublime skill which had come before it.

"The whole move was inch perfect," wrote Bergkamp. Robson conceded after the game: "It was a really clever goal. We didn't do anything that clever up front."

Bergkamp wasn't finished there. His pin-point free-kick allowed Sol Campbell to double the advantage before half-time, and Arsenal comfortably saw out the win. Not a bad contribution from a player who had found himself on the bench more often than not in the first half of the season.

"It was very important because Newcastle were doing well at that time," Bergkamp reflected at the end of the season. "Nobody really expected us to take the points at that stage. To score the first goal, to me that was one of the most important goals."

That victory was followed by 10 more in a row in the league which took Arsenal to a seven-point title win ahead of Liverpool, with former challengers Manchester United and Newcastle back in third and fourth, respectively.

The crown was clinched - and the Double confirmed - at Old Trafford on May 8, four days after Arsenal's FA Cup Final win over London rivals Chelsea.

But the standout moment of the season belonged to Bergkamp.