Arsenal striker Yaya Sanogo confident he will silence his critics

Arsenal striker Yaya Sanogo has vowed to silence his critics and prove he can score goals for the club.

Sanogo has come in for criticism from some quarters after failing to score in 17 appearances for Arsenal since arriving from Auxerre last summer.

The France Under 21 international admits he struggled to adapt to life at Arsenal last season after almost two years out of action with a serious leg injury in 2010.

However, Sanogo is confident that, once he breaks his goalscoring duck for Arsenal, the club's fans will see the best of him.

"Football is the football, but it takes time to adapt," Sanogo told L'Equipe.

"I needed six months to adapt. I've had quite a lot of problems. I arrived on one leg.

"It's been difficult to adapt to the league. There's a lack of confidence, perhaps a bit of pressure too. You're 21 and you play up front for Arsenal, it's not easy.

"When you come out of Ligue 2 and you end up in a duel with [Man City's Vincent] Kompany, it is not an easy task.

"On all aspects (of my game), I’ve evolved. When you train with great players every day, you progress. When you play big teams, it helps gain experience. 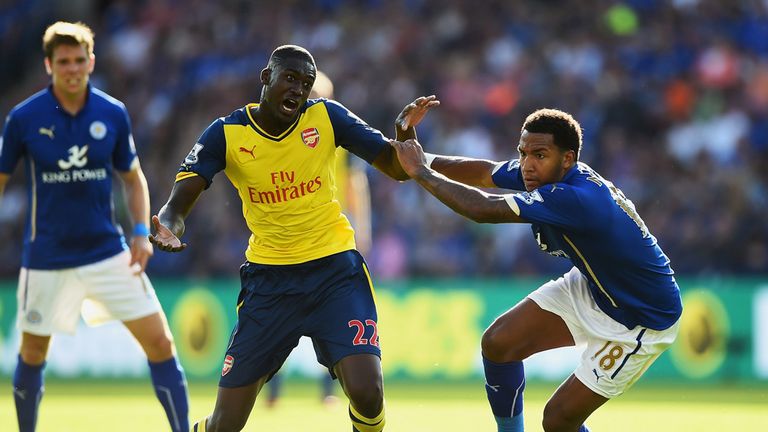 Once I've scored my first goal, everything will be fine. It's their problem if they criticise me. I'll still be here. I'm going to play, improve and score goals. Sooner or later, it's going to go in.

"It's a big club. The fans know that I've scored a lot of goals at youth level, they're putting me under a little bit of pressure.

"Once I've scored my first goal, everything will be fine. It's their problem if they criticise me. I'll still be here.

"I'm going to play, improve and score goals. Sooner or later, it's going to go in.

"At 21, it’s not easy to play as a striker at Arsenal. You have to fight every day to prove your worth. But Wenger just pushes me to continue and my work will eventually pay off."

Sanogo has also warned deadline-day signing Danny Welbeck that he is ready to fight the England international for a place in the team.

"He's going to have to battle for his place in the side," Sanogo added. "Last season, I didn't doubt myself. I was more afraid of getting injured. If the coach brought me in, it's because he has faith in me."