Moussa Sissoko on his Tottenham turnaround and Champions League belief

Few would have believed the turnaround Moussa Sissoko has managed in two years at Tottenham. Apart from the man himself.

Speaking to Sky Sports ahead of Thursday night's trip to Sheffield United, live on Sky Sports Premier League, Sissoko cuts the figure of a man eminently comfortable in his surroundings.

That says a lot about how life at Spurs has changed for the 30-year-old, who once carried the tag of Tottenham's then-record signing like a badge of shame, and was mocked by his own fans for his perceived deficiencies.

When Sissoko arrived for £30m on transfer deadline day in August 2016, there was plenty of excitement around the deal. Sadly, most came from Newcastle fans, surprised that such a talented but wildly inconsistent player could command that kind of price, especially playing for a then-Championship club.

But now four years into a Spurs career which would have been cut short in 2018 had anyone stumped up the asking price to move him on, Sissoko was named player of the year by club legends last season and since then, has even had manager Jose Mourinho joining in with his White Stripes-inspired chant. It's difficult to remember just how bad things once were.

"In my head, I knew I could do it," Sissoko told Sky Sports. "I knew my quality - if Spurs signed me, it's because they had seen it in my past. Maybe I just needed some time; when I arrived, the team was performing already and nearly fighting for the title. It was a strong squad, so to come and play straight away is not easy.

"It's an amazing feeling now, it's totally different to being someone who is not playing much, coming on in the last 10 or 15 minutes, to being someone playing nearly every game. I don't think too much about the past now.

"Nothing is easy so you have to work hard to prove yourself you can do it, no-one will give it to you easily. It was difficult at the beginning, but that's like life."

Difficult may be an understatement. Less than three months after arriving, Sissoko was dropped from the Tottenham squad altogether by then manager Mauricio Pochettino, and publicly castigated after the game. "I believe the players that start on the bench deserve to be involved. [Sissoko] needs to work hard and show in the future he deserves to be involved in the team," was the unusually stern message to the media.

It would take a while for the message to bear fruit. Trusted with a starting role for France in the Euro 2016 final, Sissoko managed only eight across his entire first league season with Tottenham. These often came as a back-up right-winger, a position he was also often asked to fill for Newcastle and his country, but not one he has ever felt particularly at home with.

With a huge transfer fee on his head and little to show for it, Sissoko soon became a figure of fun among supporters. Before an away game at Real Madrid in his second season, Spurs fans sung "Who needs Bale when we've got Sissoko," at the Bernabeu, a slightly cruel mocking of a player out of form and clearly lacking in confidence.

He would never say it, but it would have been understandable if any dislike from those in the stands was reciprocated. Perhaps what's more revealing is how the now 30-year-old can pinpoint the moment things all began to change. "If I had to pick a game, I remember it as the 1-0 loss against Manchester City at Wembley," he said.

The match itself, back in October 2018, was largely unremarkable. You would have probably given the highlights a miss. But one subtle talking point was picked up by Sky Sports' Gerard Brand inside the stadium during the second half. "Much better from Spurs this half," he wrote. "And in fairness, Sissoko is central to it. His strength has never been in doubt, but he's shown a bit of poise on the ball, too. The Spurs fans are even singing his name!"

For the first time, Sissoko's chant echoed around the ground out of admiration rather than ridicule. It was only a small moment, but it would prove to be the start of something special.

"I played very well, my performance was very good," Sissoko recalled. "Then a week later I played at Crystal Palace when we won 1-0, and it all went from there."

The upturn was remarkable. Sissoko started nine of the next 10 league games in his favoured central midfield and rapidly became a vital cog in the Spurs machine, his energy and dribbling ability pivotal in winning the ball and progressing with it. During that period, he won more tackles than any other Tottenham player, and only Dele Alli, Heung-Min Son and Harry Kane completed more dribbles. 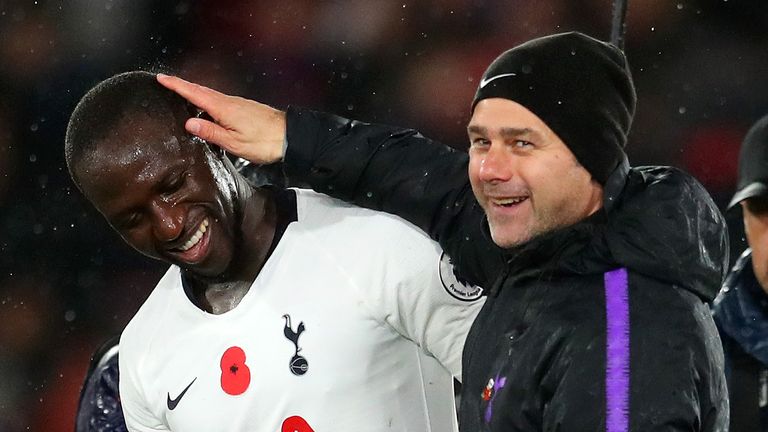 "Good things can happen if you are a professional like Moussa and keep pushing and working hard.

"Sometimes when you feel the pain you keep your head up, keep pushing and keep working hard, that is the only way to get through it.”

Mauricio Pochettino on Sissoko in November 2018

It set the tone for the rest of the campaign. By April, the story even goes that after Tottenham's fairytale Champions League semi-final win at Ajax, the first song sung in the dressing room was not that of hat-trick hero Lucas Moura, it was Moussa Sissoko's. This season, the news he had signed a new long-term deal at the club wouldn't have been much better received had Harry Kane been putting pen to paper.

The Bale 'comparisons' have long stopped, with Sissoko playing in his best role, playing his best football, and the questions about his price tag a distant memory.

"I fought for it, I totally deserve it," he said. "Now I need to keep going and working to not relax and say ok I've done it, I can be calm, I need even more. People will expect even more from me, that's normal. I'm trying to fight every time, starting in training and in games, and I try to give 100 per cent to myself and the team.

"I've had some good times everywhere, Toulouse, in Newcastle, with Tottenham, but to be honest I don't think too much. I'm just happy with what I'm doing at the moment, I don't look behind too much, it's about looking forward. The most important thing is to improve every day, be better and better, have some success with the team, try to win some titles, this is how I see my direction."

'I always had Champions League belief'

Four points from two games since the restart, coupled with a finally fit-again squad thanks to a three-month enforced break, has given Tottenham's season a whole new look, and victory at Sheffield United on Thursday would put them within four points of fifth-placed Manchester United.

But less than a year since being beaten finalists, Spurs are still in severe danger of missing out on next season's Champions League altogether amid such a torrid season of change. Their hopes look slightly more realistic than they did three months ago, but Sissoko's faith of getting over the line is as strong now as it was even then.

He is one of those to benefit from the time away, having missed more than two months leading up to the coronavirus break with an injury of his own, and is under no illusion about how hard it would be to miss out on qualification.

"It would be [a major blow]," he said. "We all want to win and play in the best competitions in the world, and we know it's one of those. To not play that would be painful, but we are not there yet so there are still plenty of games to play, plenty of points to get until the end of the season, and we can still reach the target.

"Even before the break, I believed that we could get into the Champions League, but maybe we did not have the results that we wanted for different reasons.

"I was injured, so was Heung-Min Son and Harry Kane, but also Giovani Lo Celso. We had a lot of injuries - that's why it was difficult to perform. We have been missing a lot of players, but I think the team tried to fight, they tried to do everything they could on the pitch, but the result wasn't there.

Spurs have done enough to suggest they can do that with a good result and performance against a strong Manchester United side and a routine win over West Ham - and keeping up that form against the Blades, one of their Champions League rivals, might just get a few more believing.