Gabriel Jesus insists Sergio Aguero deserves to be Manchester City's record goalscorer and wants to help the Argentine achieve it.

Pep Guardiola had opted to partner the forwards together in his starting line-up this season prior to Aguero suffering a broken rib in a car accident in Amsterdam, while Jesus was the striker left out in the 3-0 win over Burnley last weekend.

Aguero scored his eighth goal of the season in that game to equal Eric Brook's record of 177 goals at the club, and Jesus hopes to help his team-mate become City's all-time top scorer outright against Wolves on Tuesday in the Carabao Cup fourth round.

"I get on with Sergio very well," Jesus said. "He's an amazing guy. All of us know what type of player he is. He's a fantastic person and I'm a fan of his.

"It's very good to play with him. When you have a good relationship off the pitch, it's easier to bring it on to the pitch. That's what we have.

"We help each other and that helps Manchester City. We both defend the shirt of this club, so we pull together on the pitch, the same way we get along off the pitch."

Jesus added: "I support him and I hope he can beat the record as soon as possible. He deserves to become the top scorer of this club."

Following his arrival at City in January, Jesus scored three goals in his first four appearances, then had his progress abruptly halted in the fifth as he broke his metatarsal and was sidelined for two months. 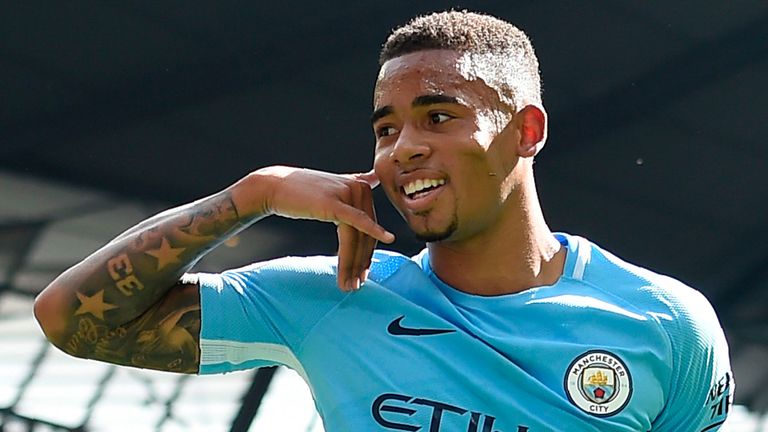 I get on with Sergio very well. He's an amazing guy. All of us know what type of player he is. He's a fantastic person and I'm a fan of his.

Jesus netted four more goals towards the end of last term, though, and currently has eight in the current campaign for Guardiola's unbeaten Premier League leaders, who are on an 11-match winning streak in all competitions.

The 20-year-old said: "I think the worst moment of my career so far was the injury I had here.

"But it didn't knock me down. I had everybody's support, from my family, everyone at Manchester City. That helped me a lot to overcome the injury.

"Pep is a winner. I'm very happy to have the opportunity to be coached by a great manager and a great person. I'm very proud to be part of his team and he can teach me a lot of things.

"I'm going to give my best to help the team to be able to lift the Premier League trophy.

"We are going to try to keep the momentum, win games and fight for trophies until the end of the season."