Eight years on, we look back at the incredible finish to the 2011/12 season when Sergio Aguero's last-gasp strike handed Manchester City their first Premier League title.

It seems just like yesterday when City produced one of - if not the - most dramatic finishes to a top-flight campaign there has ever been.

What is more, all the never-to-be-forgotten action was captured live on Sky Sports in what turned out to be an afternoon full emotions and intrigue for Roberto Mancini's side and their long-suffering fans.

So here we remember the remarkable events of Sunday May 13, 2012…

Both City and Manchester United were locked together on 86 points at the top of the table, however, it was the former who held the advantage in terms of goal difference. They were eight goals better off heading into the final afternoon of the season.

With the clock ticking agonisingly towards full-time, though, it was the red half of Manchester who were starting to celebrate a 20th league title at the Stadium of Light.

But with a first top-flight title since 1968 seemingly slipping from City's grasp, Edin Dzeko equalised in the 92nd minute to give them a glimmer of hope and ensure an anxious wait for United supporters some 137 miles away on Wearside.

Then, in the dying embers of stoppage time, Aguero collected the ball from Mario Balotelli on the edge of the box before rounding Nedum Onuoha and slamming it past Paddy Kenny to give City their first title in 44 years and spark pandemonium at the Etihad.

Almost as memorable as the goal itself was Martin Tyler's iconic commentary on Sky Sports.

"Aguerooooo..." he screamed as the striker fired in the winner. "I swear you'll never see anything like this ever again. So watch it, drink it in."

How 'Kun' was written into City folklore

So, what does Aguero - nicknamed 'Kun' - himself remember of the move leading up to his title-winning strike?

"It was the first time I'd actually dropped deep in the entire game. I'd been marked by the defence, but I came deep to receive the ball," he recalled.

"My first thought was, if I can get it a little bit out of my feet, beyond the defender, I can perhaps get a penalty because there was some slight contact - but the ref probably wouldn't have given it!"

Aguero also spoke about Balotelli's role in the goal, as he played a one-two and then laid the ball into the path of the Argentine as he was slipping over.

"You'll see that I look up when I get hold of the ball, so I can look for where Mario is. So I get a chance with the outside of my foot to just play it into Mario," said Aguero.

"Then, incredibly, Mario was falling - but with a great amount of skill he managed to play it back to me and I burst into the area."

And how often does he get asked about the goal? "It's not every day, but it is ever so often! When anyone mentions a goal in the last minute or if QPR come up in the news I think about it."

'I knew he would score!'

Tyler, who has been calling games for Sky Sports since its inception in 1992, also recalls the events through his eyes up in the commentary box.

"You would not have believed the way City won the Premier League title in May 2012 unless you saw it," remembers the veteran commentator. "Millions of Sky Sports viewers, including a very fortunate commentator, had that privilege. It should have been straightforward for City against relegation-threatened QPR. It was anything but.

"Failure would hand yet another title to none other than bitter rivals United, winners of 12 of the 19 previous Premier League crowns. City had not been champions since 1968 and were in danger of squandering a glorious opportunity. It was a tense first half summed up by a scrappy City goal from Pablo Zabaleta. 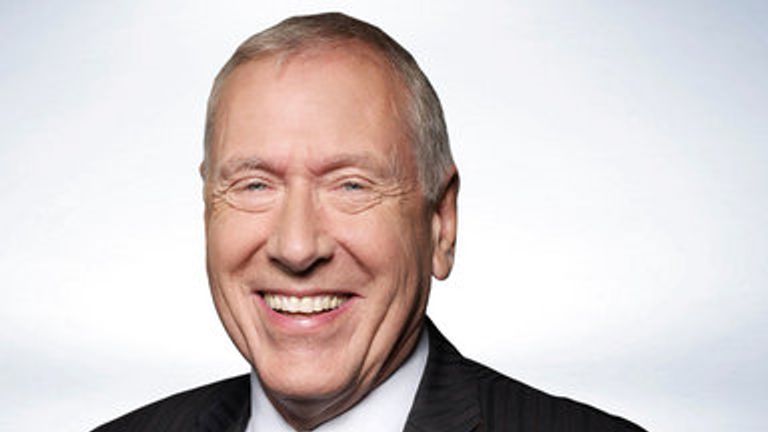 When the great Argentine took a touch, I knew he would score. I took a deep breath and... well, you know the rest!

"Djibril Cisse stunned the home crowd with an equaliser and even though the former City midfielder Joey Barton got himself sent off the 10 Rangers men took the lead through Jamie Mackie.

"When the board went up for five minutes of added time, City still needed to score twice to win the game and the title. Dzeko's part in this footballing fable is often overlooked. His header made it 2-2.

"United had finished at Sunderland and the players were focused now on our coverage from the Etihad on monitors at the side of the pitch. Those pictures were under the masterly control of Sky's senior match director Tony Mills. He split the screen into the story at both venues. City still playing. United now just watching.

"He cut back to full pictures of the match action just as Balotelli rescued possession for City and diverted the ball to Aguero. When the great Argentine took a touch I knew he would score. I took a deep breath and… well you know the rest!"

'It doesn't get more dramatic than that'

"When you think you go a whole season and it takes the last kick, of the very last game, in the last minute to win it on goal difference," he said.

"I thought that was just drama personified. I don't think it gets more dramatic than that. I think Martin Tyler's 'Agueroooooo' was just theatre, just absolute theatre."

United went on to exact some sort of revenge by beating City to the following season's title - the club's 20th in the top flight - allowing Ferguson to retire on a high, while Mancini was given his marching orders after his side surprisingly lost the 2013 FA Cup final 1-0 to relegated Wigan Athletic.