The Sky Bet Championship 2019/20 season was supposed to come to a conclusion on Saturday, but who would have been promoted, relegated or reached the play-offs?

If the campaign had continued as normal than the final round of second games would have taken place on Saturday, May 2 and we have turned to Football Manager 2020 to find out what may have happened throughout the rest of the campaign.

Football Manager have used their unique software to simulate the rest of the season, and to see how the table would have shaped up going into the final day of the campaign.

Sky Sports will be simulating that from midday on Saturday. You will be able to follow it here...

What happened during the rest of the season?

The team catching everybody's eye is Nottingham Forest, who storm their way into title contention after a sensational run of seven wins and a draw from their final eight outings, moving Sabri Lamouchi's side level on points with second-placed West Brom and just two behind leaders Leeds.

Cardiff picked up just six points to fall away from the play-off picture into mid-table and at the other end of the standings, and despite rallying over the last few months, fellow Welsh side Swansea are forced to settle for another season in the second tier.

Stoke and Huddersfield rally to lift themselves clear of danger, along with Grant McCann's Hull, who narrowly miss out on relegation despite being in free fall prior to the coronavirus outbreak. Meanwhile, while Charlton occupy the final relegation spot, they sit second in the form table over the past eight fixtures, with Lee Bowyer bringing some much-needed hope to south east London. 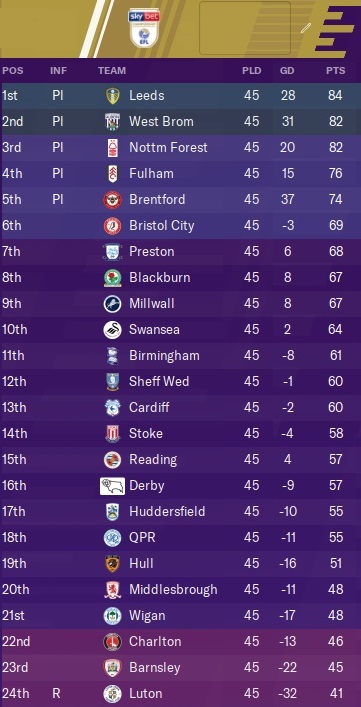 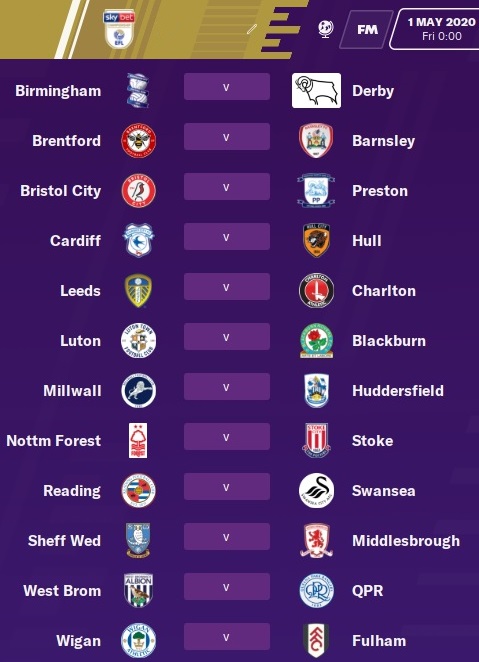 Aside from the aforementioned title race, with five teams having guaranteed a play-off spot at least, Bristol City, Preston, Blackburn and Millwall - separated by just two points - go head to head for the final berth.

Luton, unfortunately, are already down, and Barnsley are on the verge of joining them. The Tykes face a tough trip to Brentford in need of a win, a big goal swing and other results to go their way.

Charlton, meanwhile, are two points adrift of Wigan and Middlesbrough. The Addicks, however, face a daunting trip to Leeds.