In an exclusive interview with Sky Sports, the Leicester forward expressed his admiration for United's current form - which has seen the Foxes' eight-point lead slashed to one since the restart.

"Bruno [Fernandes] is a top player. They've got Marcus Rashford and Paul Pogba back in the team now. They're flying. But that's not what we need to worry about. We just need to focus on our games."

Before lockdown, the Foxes were cruising to a third-place finish - guaranteeing Champions League football next season. But with just one win from five games since the restart, coupled with Chelsea and Manchester United finding their groove, the race for Europe looks set to go to the wire.

A spate of injuries to key players James Maddison, Ben Chilwell and Ricardo haven't helped the cause. "Madders [Maddison], Chilly [Chilwell] and Ricardo are fantastic players. They have a big impact in the team. I love playing with them.

"But everyone can fill the gaps as well. Everyone knows what to do when you're taking someone's place."

A fifth-place finish might be enough for Champions League qualification - if Manchester City's ban from the competition is upheld and their appeal is unsuccessful - but Iheanacho clearly believes Leicester are masters of their own destiny. "I don't know what's going on with that but we're just focusing on our games."

And that fate could well be sealed on the final day when Leicester host United at the King Power.

The Nigeria international missed out on the Foxes' maiden journey in Europe following their against-the-odds title win in 2015/16, when they lost to Atletico Madrid in the quarter-finals.

He's itching to compete among Europe's elite again - more than three years after his last appearance in the competition with Manchester City. "We've worked really hard to get to this stage, so it would really be a dream."

As a 19-year-old at Manchester City, Iheanacho had the best goals-to-minutes ratio of any player in Premier League history and he cherishes those heady early days.

"My Premier League debut was against Watford in 2015. I got a few minutes or so. It was truly heart-warming. So nice, being young and then scoring goals.

"There are young players doing well now and I'm happy for them, like Phil Foden and Mason Greenwood. You never know how it really feels until you start getting older and understand more."

Game time was hard to come by at City and the lure of regular starts led to his £25m move to Leicester in 2017. "Everybody wants to play. No one wants to sit on the bench."

Back from the wilderness

But regular football has come in fits and starts at Leicester. Over the past three seasons, he hasn't surpassed 1,000 league minutes - but that could change this campaign with 827 on the clock and four games to play.

This season, he made his first league appearance against Everton in December - four months into the campaign - and he seized that opportunity with a match-winning goal and assist. He's been a mainstay in the team since.

The appreciation of that pivotal performance is clear to see. "First and foremost: that's a moment that will be in my head for a long time."

Just one week after that game, he replicated the return in a 4-1 win at Aston Villa, teeing up Jamie Vardy's opener before doubling the Foxes' lead.

But then the goals dried up. When lockdown paused the season, he was goalless in the Premier League this calendar year, despite a January purple patch in front of goal in domestic cups. The enforced break allowed him to take stock. 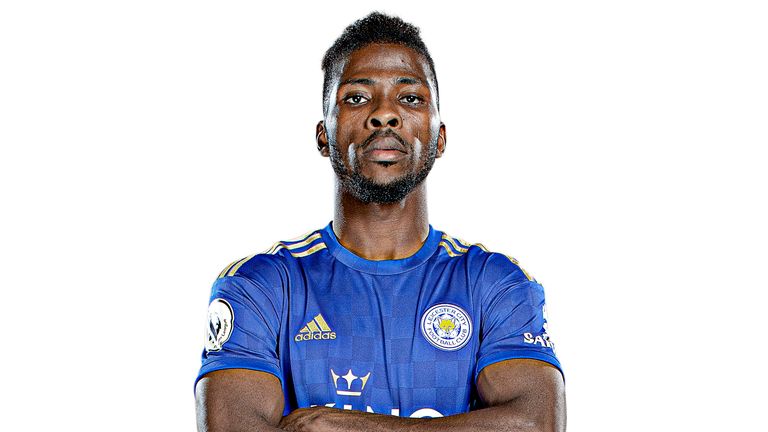 First and foremost: that's a moment that will be in my head for a long time.

Iheanacho on his goal and assist against Everton in December

"We've been training at home and the coaches have been giving us work to do. It's gone well. I was just keeping fit and training every day." In moments of downtime, he'd watch movies or play FIFA. "I like cooking as well and spicy African dishes have been on the menu," he adds.

The break certainly served him well. Shortly after the restart, he broke his 2020 league duck in the 2-1 defeat to Everton this month and scored again in a 3-0 win over Crystal Palace just three days later. And there's been a positional tweak on the pitch, too.

Leicester abated one of their top-four rivals, Arsenal, on Tuesday - capitalising on Eddie Nketiah's dismissal to salvage a 1-1 draw at the Emirates. In that game, Iheanacho started on the right of a front three, in a 3-4-3 formation - a position he's happy to occupy in the future.

"It's not the first time I've started there. It's not really right wing. It's two strikers and one behind me and Jamie [Vardy]. Sometimes I drift off to the right, so I'm more inside.

"Playing with Jamie is an honour. He's a top finisher, so whenever he plays and scores he inspires me, because I want to repeat that."

So does he fancy emulating the likes of Mohamed Salah in that right-sided role? "Mo Salah is Mo Salah!" he jokes. "If I find myself in that position, I'll just crack on. We just need to play according to the plans."

For now, Iheanacho is focused on returning to winning ways and maintaining his run of form, and that starts with their trip to the Vitality Stadium this Sunday, live on Sky Sports from 6.30pm.

"I'm happy here. Everyone at the club has been fantastic. I'm scoring goals, have a good family, good team-mates.

"We want to win every game. We just keep working. We're getting ready to go there. They did well in the last game against Tottenham, so we just to be focused, do our job and get the points we need."