Marc Albrighton on Leicester's form and their Champions League lifeline

On Sunday evening, Leicester were beaten 4-1 by struggling Bournemouth. On Monday morning, the news broke that Manchester City’s European ban had been overturned.

Leicester will now have to finish in the top four to qualify for the Champions League - a position they have held since September but looked set to drop out of that very evening.

Instead, Michael Obafemi's 96th-minute equaliser for Southampton - the latest ever scored by a visiting team in a Premier League game at Old Trafford - changed the mood once more. Manchester United remain below Leicester on goal difference. Hope endures.

Marc Albrighton did not watch the game on Monday night. Family commitments spared him the stress. But a text message from his best friend soon let him know. 'That's a big goal for you boys.' This is the business end. No pretending the results of others do not matter now.

"We have been given another lifeline," Albrighton tells Sky Sports.

"We could have been dead and buried by now. With some of the results that we have had, we probably should have been. We need to look at this as another opportunity. It is an opportunity for us to put things right."

With United still to come to the King Power Stadium on the final day, that showdown looms. But Leicester will have to address their own form if they are to achieve their objective of a top-four finish and that means getting a result at home to Sheffield United on Thursday.

Something will have to change against the Blades because it has been a worrying slump. Eight consecutive wins at the back end of last year had lifted Leicester up to second. They began the new year in both cups and with Champions League qualification all but certain.

But that feels a long time ago now.

Knocked out of the cups, the league form has suffered too. Leicester are down in 14th in the form table since January having won just three of their last 14 in the Premier League.

Against Bournemouth, Kasper Schmeichel's error allowed the home side to equalise before Caglar Soyuncu compounded the problem by being sent off in the aftermath of the opposition's second goal. Supporters are becoming frustrated by the slips ups.

But this is about more than mistakes.

Suddenly, the tactical flexibility that Brendan Rodgers regarded as such a strength of Leicester's approach is being questioned. Now viewed through a different prism following a run of bad results, fans are coming to see it as needless tinkering instead - the half-time withdrawal of Kelechi Iheanacho for Dennis Praet on Sunday being a prime example.

Albrighton, who went off injured himself in the first half with what he hopes is a minor problem, offers no excuses for the events that occurred at the Vitality Stadium. 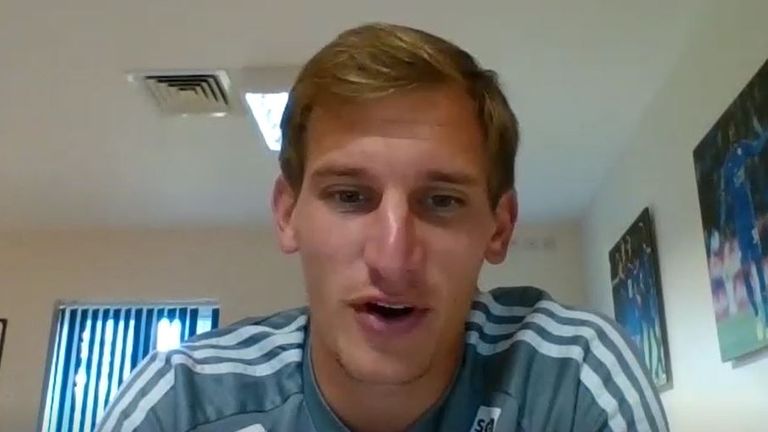 We could have been dead and buried by now. With some of the results that we have had, we probably should have been.

"I thought we were comfortable throughout the first half," he says. "We went one up and could have scored more but it was not to be. In the second half, it was just a lapse in concentration for 20 minutes - if that - and all of a sudden we are down in the game.

"The Premier League is unforgiving. You cannot afford to make mistakes. Whether you are playing a top team or a team down the bottom, you will get punished straight away.

"Just the way that we capitulated, none of the players or staff accept that. It is totally against what we are about and we are certain that it will not happen again.

"There are ways to lose football matches and that was not one of them."

Kasper Schmeichel earned praise for facing the Sky Sports cameras to give a post-match interview, although Albrighton insists that no apology was necessary for his team-mates.

"He did not need to do that," he adds. "He has been an incredible goalkeeper, leader and team-mate for as long as I have been here. He has saved us so many points over the years and even just this season. For him to come out and front up is really big of him but none of the lads expect that from him. A mistake is a mistake, it happens."

Albrighton has seen the highs and the lows during his time at Leicester. Perhaps that is why he has a more sanguine perspective on the team's recent troubles.

"Football is very fickle. One day you are on top of the world, the next you are feeling as low as a snake's belly. You have to manage your emotions. We have to have a calmness of the mind when things go well and when they go bad. Do not get too high or too low."

But his eyes widen when asked about the atmosphere.

"Whenever things go wrong, it is the first thing that people want to know," he says.

"Is it a bad dressing room? Is there unrest? It is nothing like that. It is an indifferent run of form but there is no major issue. It is such a together group. We have a squad in which everyone gets on. There are no egos. Everyone works for each other. The fans know that.

"It is difficult to put your finger on what has changed. We have been doing the same things but we have not been consistent enough and it just has not gone for us. It shows how well we did in the early part of the season to still be in the mix. We are still on track."

There is some substance to Albrighton's suggestion that not much has changed, even if jittery supporters could be forgiven for focusing on the negatives in the current situation.

Results shape the narrative, of course, but Leicester's underlying numbers were never those of the second-best team in the land. Equally, the underlying numbers throughout this difficult period have not been nearly as bad as the results would indicate.

Indeed, Leicester's net expected goals - the tally of chances created set against those conceded, factoring in the quality of those chances based on location and type of shot - suggests they were the fifth-ranked team up to the turn of the year and the sixth-best since.

In that time, they have had the better chances in away games against Burnley, Norwich and, since the restart, Everton, but lost all three of those matches by the odd goal.

Leicester are coming out on the wrong side of these close games now.

"We have done very well in periods of games. Everton, we dominated but for 20 minutes in the first half there. Arsenal, we dominated in the second half. It is just these lapses in concentration that are costing us points at the moment which we cannot afford.

"We are a young squad and there are going to be inconsistencies. It is a learning curve. That main thing is to learn from it. We need to start doing the basics right."

Perhaps it is no coincidence that the dip came when Wilfred Ndidi was injured in January, but the midfielder has been unable to arrest the slide since his return. Now the focus has shifted to the absence of the team's star right-back Ricardo Pereira. Those two have started only one Premier League game together since New Year's Day - the 4-0 win over Aston Villa.

Add to this the loss of James Maddison in recent games, a player who was so pivotal in the first half of the season but has now played over 20 hours of football in all competitions without contributing either a goal or an assist, and some of the issues become clear.

"These players are top players so we have missed them greatly," admits Albrighton. "But I think we have strength in depth here. We are raring to go for Thursday."

Sheffield United go into that game as the form side and while Albrighton claims that he sees similarities between the two teams, confidence levels are likely to be very different.

"They have their way of playing and they stick by it. It is going to be a tough game."

Leicester need to rediscover their own way.

There is still time. This could still be a special season.

"It would be disappointing to not have anything to show for what a great season we have had. The fact that we are still in the mix tells me something is going to happen. I am a big believer in fate. We are still in it. It is in our hands. I believe that we will get there."