James Maddison says Jamie Carragher spurred his surge in form after he scored for the third successive Premier League game and produced a man-of-the-match performance in a 2-0 win over Chelsea.

Leicester leapfrogged Manchester United at the summit after Wilfred Ndidi broke the deadlock in the sixth minute before Maddison doubled the Foxes' lead before the break.

The England midfielder has now scored in three successive league games for the first time in his career and revealed Sky Sports pundit Carragher had inspired his quest to improve goal involvement in an insightful post-match interview.

"I remember a game we played against Sheffield United earlier in the season. I always watch the games back and Jamie Carragher said on commentary that James Maddison has to get his numbers up if he wants to play for England and be talked about in the same bracket as others.

Jamie Carragher said on commentary that James Maddison has to get his numbers up if he wants to play for England.

"Me, the gaffer, and Jack, the analyst - Jack will be buzzing that I have name-dropped him - looked at where I could get more goals. Playing a bit deeper, I was a No 8 today, little things like breaking from deeper and getting beyond that last line, kind of almost smelling where the ball is going to drop. It is not an easy thing to do.

"Frank Lampard was the best at it, arriving late to score goals. Mark Albrighton got his head up and I just drifted. That is something I will keep improving because everyone wants numbers, I want numbers, I want goals and assists, I want everyone talking about me. That is an area that I am looking to improve on." 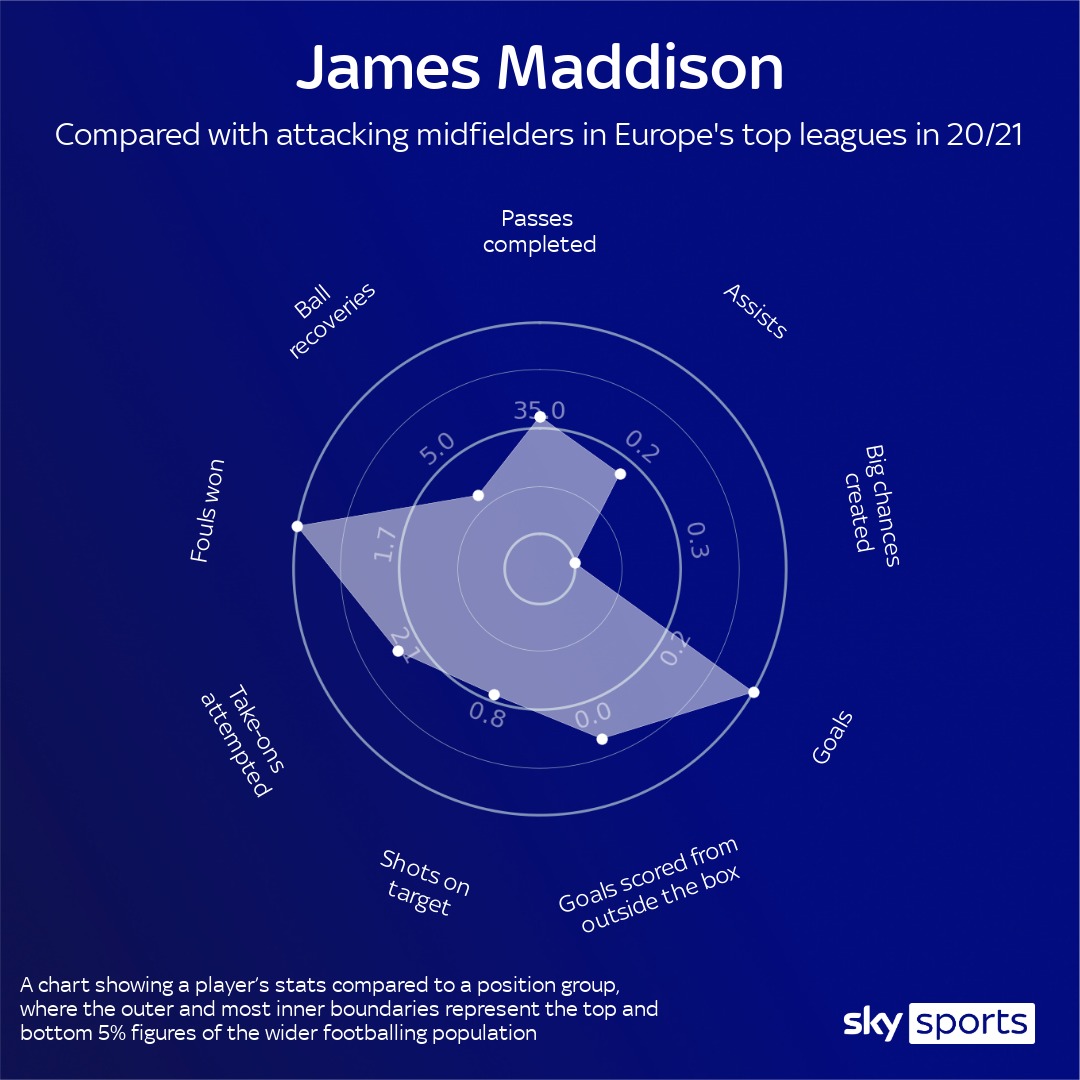 The opening goal came from a training-ground corner routine and Maddison revealed how the team had planned methods to exploit Chelsea's weaknesses in set-piece situations.

"We worked on it, we looked at Chelsea, little short corners and being creative. They switch off at times from set-pieces and we knew that was something we could pick on.

"We have not scored enough goals from set-pieces. I have been pulling my hair out as the corner taker. You look at the stats that come up and it is Leicester bottom of the table, zero. It is really nice to see one come off, a bit of a relief really.

"Credit to the manager as well. We made a bit of a switch at half-time to almost go 4-4-2 out of possession, 4-3-3 in possession. Just little things like that, thinking on our feet. We dealt with the threats that came our way and I thought we deserved the three points.

"You don't play for Brendan Rodgers if you don't do the dirty work, it is as simple as that. He always reiterates that to us that it is a running game. You can't carry anyone in this league, especially a team like we are, we have to stay together if we want to stay up there for the longevity of the season.

"There might be teams who can spend a lot more money than us, bring in quality from abroad and pay big wages for big players but that team spirit and that togetherness that is here at Leicester for all to see will continue and hopefully keep us up there at the top of the table."

Could Leicester produce a second miracle - five years after they defied the odds and lifted the Premier League trophy in 2016?

"Sounds nice, doesn't it, top of the Premier League, for about 24 hours," said Maddison. "But it is a good one psychologically because we have worked really hard.

"We are halfway through the season now so to be sitting top is a great achievement for us. I don't think there will be a more complete performance from us this season. So far, I should say.

"It had a bit of everything. It had a bit of tactical nous, a bit of quality where needed. We work every time on stifling the opposition's threats and I thought we did that brilliantly today.

"We are not there by fluke. We are there because we work hard. People might talk about the Uniteds, Liverpools and Tottenhams but let them talk. We will do our business in the background and come the end of the season hopefully we will be right up there.

"I will probably go and check the table when I go in."