Michael Beale exclusive: Rangers 'not as broken as people think' | Why I left QPR

Michael Beale's first Scottish Premiership game will be on December 15 at home to Hibernian, live on Sky Sports Football; the Ibrox side are nine points behind leaders Celtic after 15 matches 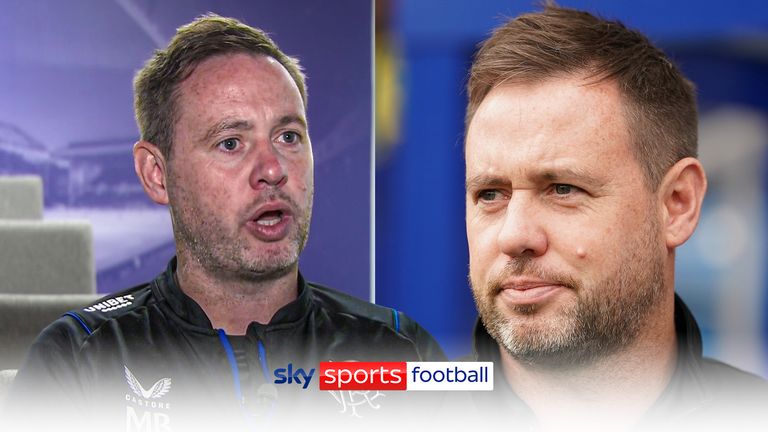 New Rangers manager Michael Beale insists the club "is not as broken" as some believe as he vows to drop any players not fighting for the team.

The 42-year-old is promising to drive up standards on the pitch and give the Ibrox support plenty to be excited about again.

He returns a little more than one year after departing Ibrox alongside Steven Gerrard, taking over from Giovanni van Bronckhorst and leaving behind the QPR job.

Beale admits the chance to manage Rangers was "impossible to turn down" as he explains why he left the English Championship for the Scottish Premiership.

In part one of an exclusive interview with Sky Sports News, Beale spoke about his return to Ibrox as the club's 18th permanent manager...

How does it feel to be back as the Rangers manager?

It's a huge responsibility to a huge number of people, fans worldwide, to the board, to the players here. More importantly the fans I think. The last two people who have sat in this seat, world-famous players and both national team captains, both did good jobs and both won a lot of games and won trophies. The responsibility of being Rangers manager is huge to a number of people. Huge pride for myself and my family. Yesterday was a very important day for me and I'm delighted to be back inside the club. It's not often you get to work for a club this size twice and I'm delighted to be back.

Is this responsibility on a different scale from what you've had before?

It's a huge club. I've been really fortunate as a young coach to work in big clubs and that's always rubbed off on me. I've spent nearly 10 years at Chelsea and six at Liverpool in two spells and I've been at Rangers before and I've been at Aston Villa. I've been used to being at really big clubs and it rubs off on you. Here the expectation is huge, it's not like anywhere else I've experienced before but I have experienced it for three and a half years so I know that it's a privilege. Some say expectation and call it pressure but I think it's a privilege. I'm running towards that opportunity and gladly I've got it.

Did you expect to be back at Rangers so soon? No, if I'm honest because I've followed the last year closely from afar as a supporter of the players, as a supporter of the club, and supporter of the board and what they were trying to do. I thought Gio came in with his staff and did fantastically well. The run to get to the Europa League final was extraordinary for a Scottish team. The teams they beat, then the way they did it, the passion, and the adversity as well in terms of losing Jimmy Bell during that period right before those games with Leipzig. When someone does something like that you naturally think that the team's on the up. For whatever reason this season it hasn't gone as well as they would've maybe liked.

What have you made of Rangers this season?

I think the injuries have played a massive part and I think after such a high at the end of the season, winning the Scottish Cup, I think it maybe had an impact on one or two. The injuries have been the biggest thing I've seen, I think they've had a big impact in terms of consistency on the pitch and every club needs their best players fit more than not. I think that led to a situation where the results have maybe gone the wrong way.

I think Gio is an excellent professional, he comes across so well and he's a man of high class. There was a tinge of sadness then obviously the opportunity came for myself to come back and that was a huge opportunity for me.

What do you need to change to get Rangers to perform more consistently?

That area (injuries) needs to clean up but we can't use it as an excuse. That's really important that we don't use it as an excuse moving forward. We have to get those players fit, they're fighting and working day in, day out to get back. I think that I have to create an identity that the fans are really excited about. It starts with us inside and the players being energised by it. I need to drive the standards and I have to be myself. Steven and Gio did a great job, now I need to add my stamp and it is a management team as well, it isn't just myself.

It is big changes or small tweaks for now?

We're working fast, every single day, to build and grow. We need to work right now, the boys are aware of that. We've started the last two days and it's fair to say it is slightly different from the work they have been doing and it's even slightly different from the work we did here previously. Steven was the manager, Gary (McAllister) was the assistant and I was the first-team coach.

That was the hierarchy then and we all worked very well together but it's fair to say I've got some slight subtle changes from that. Obviously, that'll be different from the last 68 games they've had with Gio. Even though I'm coming back in and I know the players, we have to go through all that again and build this team again under my ideas with the staff alongside me.

Do you have to change how you interact with players now you are manager rather than first-team coach?

I wasn't that close to the players, to be honest in terms of friends. I was never anyone's friend, I was always a bit of a disciplinarian out on the training pitch. I was the moaner of the previous staff and that was my job to take training and drive standards. I was close to the players, I was never anyone's friend, so I feel that's not an issue. The fact we lived unbelievable experiences together I think the players know we can recreate and build something strong and special again. That actually gives confidence but it's not a case of me coming back in here and having a million friends in the playing staff, I do in the support staff.

Does that distance from the players help if you have to be ruthless in terms of selection or players moving on?

One hundred per cent it does. I need to look at those guys and know they're here for the right reasons and that they're moving forward, regardless of age. Age is not a factor, the factor is are they playing for Rangers and are they working every day to make Rangers stronger? Are they a good team-mate, are they a good person around the building? Those things are really important to me, that's what's being spoken about behind the scenes. I've told them I've got a big belief in them, otherwise wouldn't have wanted to have come back.

It's a privilege to be here working but I think we just need to have a little bit of a shake and a bit of an honest conversation and get back the standards. Coaches have various ideas of how to play, but the players go onto the pitch and play. Six months ago this was the Europa League finalists. I got offered the chance to work with the Europa League finalists and that is a huge privilege and sense of pride coming back. This team is not as broken as people think. If people think that outside then the only people that can change that are the people inside and we've got to go now. There's no time to wait so if people are not all in then they can go to one side and the people who are I'll move forward with those.

What is your message to QPR fans?

It was a really difficult situation. I was extremely happy at QPR, really happy there in terms of my professional life. Les Ferdinand was outstanding with me. The four owners, I've spoken to them on the phone in the last 24 hours, and they really have been good owners. They understand the reasons. There are family and football reasons that have come to this decision. There's a difference in the size of the clubs it's fair to say, there was more in the background than the previous opportunity with a Premier League team. There were two or three opportunities that have come out of nowhere.

It's fair to say it's been a whirlwind since I left Steven and stepped out on my own. Things have moved really, really quickly. We had to remind ourselves that Rangers were the Europa League finalists five or six months ago and a manager, in his first year, that knows the club and knows the players was asked to come back. That's very unique, the size of this club. It's not a financial decision, there were other opportunities that were financially bigger, this is a football decision and also a decision for my personal life. My family are very happy and comfortable here in Glasgow. Everything's come together and what's important now is that I get on with this job.

What I can say to the QPR fans is the club is moving in the right way, they have good owners who are running the club very, very well. Very financially stable and making good decisions behind the scenes. In Les Ferdinand, they've got someone that's driving it behind the scenes every day and I think it's got a very, very good squad. I think the right manager going in there has every opportunity to take them where they want to go. All I can say is thank you to everybody. I know that I've disappointed a few, but it's never as simple as people think it is. The opportunities that have been presented to me recently were very difficult to turn down. This one was impossible to turn down.