Morten Thorsby says the decision to change his shirt to No 2 was in response to stark recent climate predictions; the Norway international has launched his own 'We Play Green' platform; Thorsby: "We have to act now and football has a unique possibility to address these challenges" 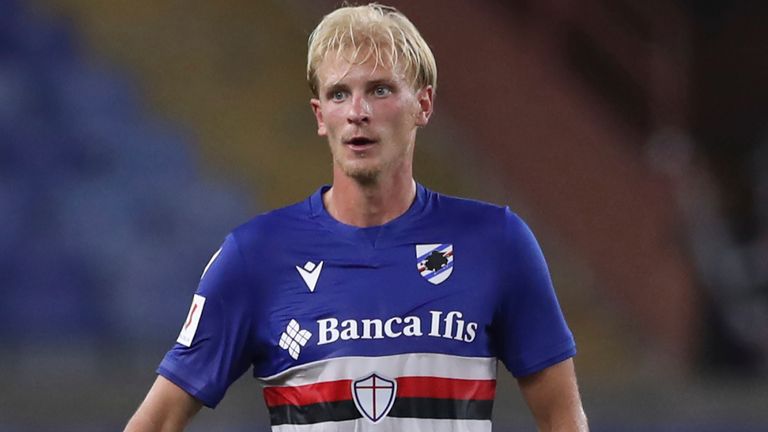 "With this influence all over the world, the global football family, 3.5 billion people across languages, cultures, it is one of the biggest social phenomena of our time. So football being with us and having it to take a stand would be a decisive factor in us reaching our goals."

Sampdoria midfielder and environmentalist Morten Thorsby has changed his shirt number this season to raise awareness about climate change.

The Norway international will switch from the No 18 to the No 2 shirt for his Serie A club, with the number representing a long-term global goal of the 2015 Paris Agreement, which almost 200 countries have agreed to, to try and ensure the worldwide temperature increase does not exceed 2C, or ideally 1.5C.

Dramatic weather events have been prevalent across the planet this year, while a recent landmark United Nations review has warned that heatwaves, droughts, and flooding will become more intense as the world is set to hit the 1.5C limit within 20 years.

Thorsby told Sky Sports News: "The change of the number was kind of a spontaneous response from me after the IPCC (Intergovernmental Panel on Climate Change) report which said it's our last chance to avoid catastrophic climate change.

We are all living through these extraordinary times. By making the right decisions the next 10 years, we can create a rich, thriving and sustainable future for ourself and all life on earth. This is a game we can not afford to lose. #WePlayGreen pic.twitter.com/qy46i5KXSg

"We all know the importance of the meeting in Glasgow (the UN Climate Change Conference). I thought it was a good moment to spread awareness about the true degree targets and it's important that we commit attention to solving the climate crisis.

"The No 2 refers to the primary objective of the Paris Agreement to limit global warming to well below 2C.

"Of course there is already a 1.5C target which is even more ambitious, which I think we should support and fully should aim for but putting 1.5 on a football shirt is pretty difficult so I decided to go for two, which is one of the most important targets."

Thorsby, who regularly retweets posts from Greta Thunberg and other activists around the world, has also formed the 'We Play Green' foundation, which encourages the football community to adopt environmentally friendly initiatives.

The 'non-profit gamechanger platform' includes its own sustainability football league in Norway, a forum where professional players can discuss climate change issues, as well as coaching and programmes on how to live in a more environmentally friendly way.

"My commitment to the environment is the rent I pay for living on this planet."

Morten #Thorsby's thoughts on National Tree🌲 Day in #Italy 🇮🇹. Words we should all heed. pic.twitter.com/WEh1NOdN6S

Thorsby added: "My engagement started 10 years ago when I became aware of the climate and environmental crisis and understood the huge challenges that the planet is facing.

"In the last 10 years we haven't been able to solve these problems, we still have a very long way to go and we don't have much time left so we have to act now and football has a unique possibility to address these challenges.

"It's been a journey, 10 years ago when I started speaking about this there weren't a lot of people listening to me, but I see it every year the situation we're in and we have to change.

"This is only going to go one way and my objective is to speed up the process and engage as many people as possible."

Arsenal defender Hector Bellerin is a shareholder in League Two side Forest Green Rovers, the world's first carbon-neutral sports club, and is outspoken about his passion for conservation. The 26-year-old made a pledge which saw him plant 3,000 trees for every Arsenal victory during 'Project Restart'.

Bellerin is an ally for Thorsby in his mission to raise awareness of climate change through football.

The Sampdoria player added: "Hector Bellerin has done a lot of great things in this area too, we spoke in a podcast and have been supporting eachother in our initiatives.

"I launched my foundation 'We Play Green' and we also want to attract other ambassadors in football, players who want to speak about this and we work with football clubs and fans to create the green change that is needed in the global football family."