Why Erling Haaland could make Man City even stronger next season

Manchester City are set to become Premier League champions but could the signing of Erling Haaland make them even better? In conversation with the striker's first coach, Adam Bate looks at why the Norwegian could be the perfect fit for Pep Guardiola...

Even as Manchester City close in on the title, thoughts are turning to how Pep Guardiola's team might strengthen for next season. Sergio Aguero, the club's all-time record scorer, is leaving. Erling Braut Haaland could make them even better.

The forthcoming statue in Aguero's honour at the Etihad Stadium will serve as a lasting reminder that in one respect the Argentine is irreplaceable. But his contribution of just one Premier League goal so far this season shows why Haaland could be a game changer.

What is intriguing is how exactly he would fit into Manchester City's successful template. Is there a ready-made vacancy waiting for him, slotting seamlessly into the role left by Aguero, or would his arrival prove the catalyst for an evolution in their approach?

The fact that Aguero has been a peripheral figure this season reflects the fact that City have already adapted their system with Kevin De Bruyne, Phil Foden and Raheem Sterling among those deployed as the centre-forward. Haaland would restore the striker.

On the face of it, at 6'4", he is a very different player to the 5'8" Aguero. But it would be a mistake to be blinded by the Norwegian's pace and strength. While it is true that there is much more to his game, what makes Haaland such a phenom is his poaching prowess.

This is not a player who needs to be heavily involved in the build-up play and - counterintuitive as it might seem given Guardiola's emphasis on possession football - that patience is a prerequisite for a City striker. In this team, learning how to wait is a skill.

Aguero is said to have complained that his team-mates did not pass him the ball and the statistics show that his role in the side evolved. Having averaged over 50 touches per 90 minutes prior to Guardiola's arrival, that dipped below 40 touches in recent seasons.

But Haaland is in contact with the ball even less than that. The 20-year-old forward averages fewer than 29 touches per 90 minutes for Borussia Dortmund in the Bundesliga this season.

That is rare for a player who scores so many. Robert Lewandowski is a pure striker but he has 40 touches per game. Harry Kane has 45. For Cristiano Ronaldo, it is 52. Kylian Mbappe has 59. At the other end of the spectrum, there is Lionel Messi with 97 touches per game.

It is important to understand that any club investing in Haaland would not be acquiring a superstar to dictate a game, merely to decide it. He exists on its margins, his movements are away from the ball. He wants the last touch. When it comes, he will need only one.

Haaland's first eight appearances for Dortmund set the tone. He announced himself in the German game with 12 goals in that time - nine of them scored with first-time finishes. This is unusual for any player but particularly one with the skill-set of Haaland. 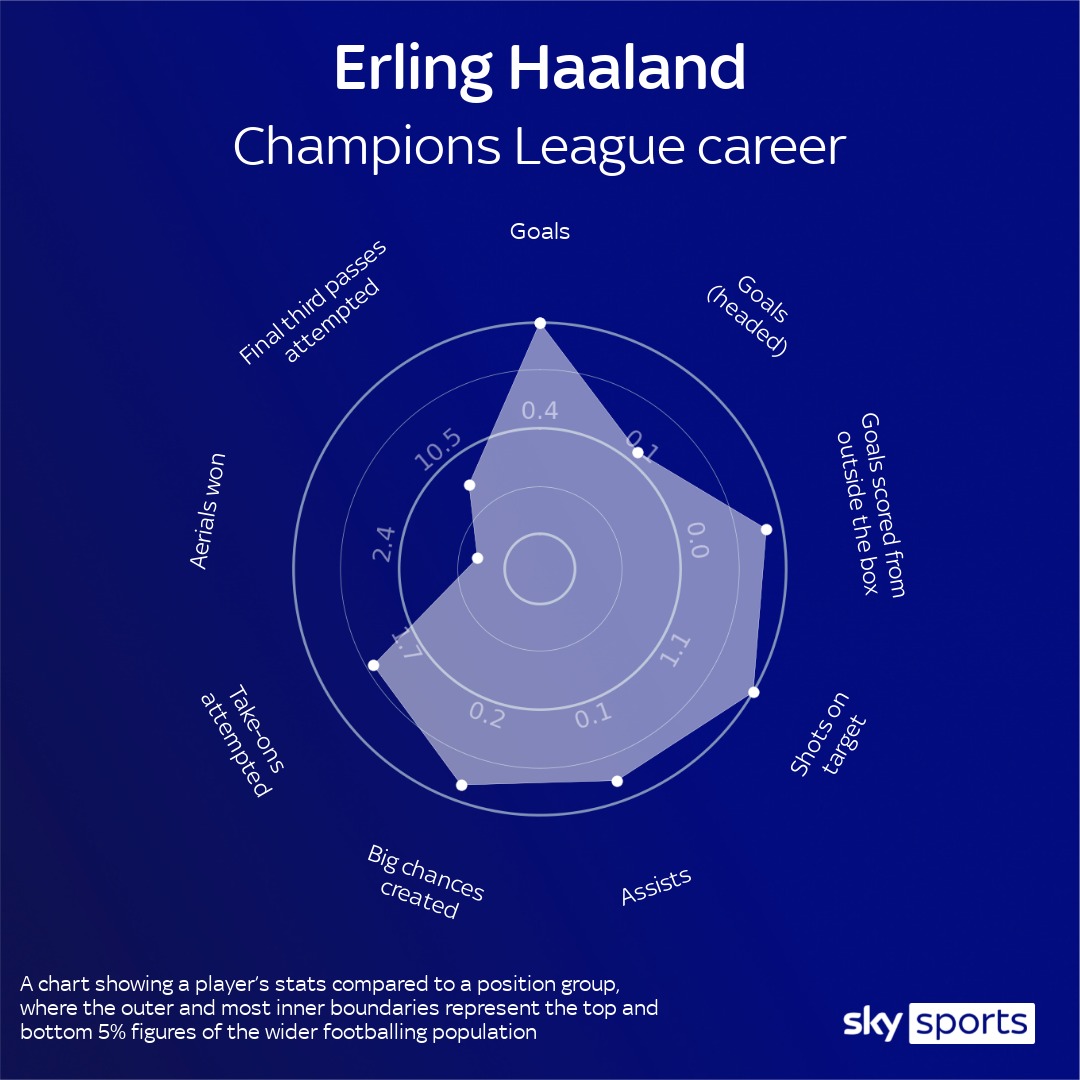 The most notable one-touch finisher in the Premier League is perhaps Olivier Giroud, but in his case this trait is an attempt to counteract his lack of pace. The Chelsea striker knows that he is unlikely to steal more than a yard on his marker. He must act fast.

Others might opt for the one-touch finish for fear of being muscled out of it if they delay. It is the preserve of the poacher, lacking in either speed or strength. But Haaland has an abundance of both. He could take his time but he is - by instinct and inclination - a finisher.

Alf Inge Berntsen, Haaland's first coach in his hometown of Bryne, explains. "In order to do that, he has had to make smart movements in the box," he tells Sky Sports. "That tells you that it is not all about his strength or his physicality, it is about his smartness as a player."

Berntsen saw up close exactly why Haaland learned to develop this gifts. He was not always the hulking figure he is today, dominating defenders with his presence even before he powers away from them with his pace. In fact, the young Haaland was a late developer.

The making of Erling Haaland

The benefit was that he did not rely on his physical attributes when learning the game - they were a welcome addendum. He is much more than a bully, he is canny with it. A devastating combination. "That is the good thing about growing late," adds Berntsen.

"He had a longer period to develop those technical skills. It is why you should not always look at what a player is doing on the pitch but what they are trying to do. Sometimes, you see a player trying to do something good but their body is growing and does not respond."

The body has responded now and the result is that Haaland, this poacher with a twist, has come to embody everything that Guardiola wants in a City striker. It is the reason why Haaland would fit perfectly even in a style that might not seem to suit his strengths.

For example, he is unlikely to be afforded the space in behind into which he might race on the counter-attack. This is not a team that will continually look to hurl crosses into the penalty box at the first opportunity, preferring instead to opt for a more patient build-up.

But they will provide cut-backs aplenty when their wide forwards find the touchline, Guardiola's favoured route to goal. When those team-mates look up, they need a striker willing to find space where there is none, ghosting into position unseen by defenders.

Haaland might seem unmissable but his movement is such that he is able to do it. He looks nothing like Aguero, and he can do things the great man could not, but he also has the qualities to ensure a seamless transition. City's next step could be one to fear.