Plus: Borussia Dortmund beat Stuttgart 2-1 to close the gap to Bayern Munich in the Bundesliga and Atletico Madrid strike late to beat Osasuna in La Liga.

The Argentinian curled an effort in from just outside the box to leave PSG 13 points clear at the top of the table after just 14 games.

But it required two late goals to see off a spirited Nantes side despite Kylian Mbappe's second-minute opener.

PSG 'keeper Keylor Navas saw red with 25 minutes remaining after rushing off his line and scything down a Nantes forward and a clever Kolo Muani backheel drew the visitors level.

Mauricio Pochettino's side regained the lead with nine minutes of normal time remaining in freak fashion.

Dennis Appiah intercepted a Messi pass, only to see it loop up and over the head of 'keeper Albon Lafont from 20 yards out.

Shortly after that fortunate goal, Messi finally broke his domestic duck for Les Parisiens and rounded off another satisfying day for Pochettino's men.

Juventus ended a three-game winless run in Serie A with a battling 2-0 victory at Lazio.

Max Allegri's side remain way off the pace in the league and sit 11 points behind Napoli and AC Milan despite playing a game more.

A pair of Leonardo Bonucci penalties proved the difference at the Stadio Olimpico, ending the hosts' 19-game unbeaten run in their own stadium.

The first came after 23 minutes when VAR judged that Danilo Cataldi had taken down Alvaro Morata in the box.

Bonucci made no mistake calmly slotting the ball beyond Pepe Reina in the Lazio goal.

Reina was at fault for the second goal as he took down Federico Chiesa after rushing off his line unnecessarily.

Defender Bonucci was again on hand to convert from the spot as Juve moved level on points with their hosts.

Elsewhere, Atalanta remain fifth after a widely-entertaining 5-2 victory over Spezia in Bergamo.

M'Bala Nzola put the hosts ahead before a Mario Pasalic double, Duvan Zapata penalty and strikes from Luis Muriel and Ruslan Malinovskyi had the hosts cruising.

Nzola notched his second of the game in stoppage-time but the visitors remain in trouble in 16th. 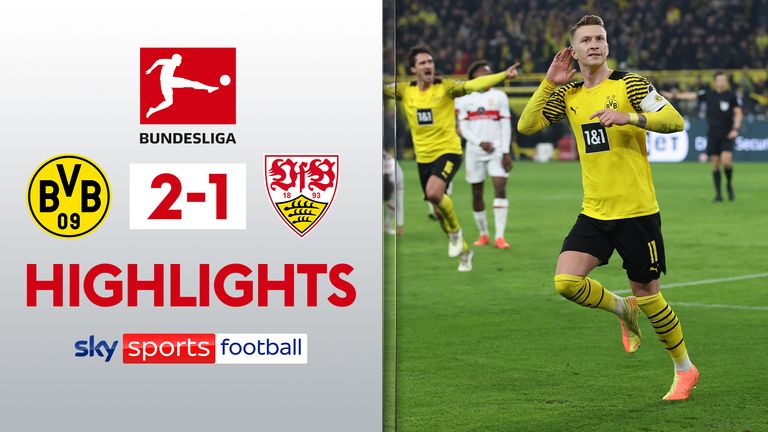 Highlights of the Bundesliga match between Dortmund and Stuttgart.

Dortmund's victory moves them one point behind leaders Bayern at the top of the Bundesliga after 12 games played.

But it needed a late goal from Marco Reus to secure the three points as he tapped in from close range with five minutes left.

Summer signing Donyell Malen had given them the lead shortly after half-time before Roberto Massimo pegged them shortly after.

An early strike from Amine Adli was enough for fourth-placed Bayer Leverkusen to see off Bochum with victories for Borussia Monchengladbach over Greuther Furth and Hoffenheim against RB Leipzig.

The only draw of the day came at Arminia Bielefeld as Wolfsburg scored twice in two minutes to came back from 2-0 down.

Felipe's late strike proved enough for Atletico Madrid to down Osasuna at the Wanda Metropolitano.

The reigning La Liga champions huffed and puffed for long periods against the high-flying hosts and it was not until the 87th minute that they finally got the breakthrough.

Felipe was well placed to convert from a corner and break the visitors' stubborn rearguard.

The gap to leaders Sevilla is now just two points after they had to rescue a point deep into stoppage-time at home to Alaves.

Ivan Rakitic was on hand to equalise after Joselu's first-half penalty looked set to give Alaves a hard-fought 2-1 win.

Victor Laguardia's header had given the visitors an early lead before Lucas Ocampos drew them level on a soaking wet day in Andalusia.