Bundesliga crowds limited to 15,000 as restrictions reintroduced amid rising Covid cases in Germany

German government agrees to reduce number of fans at outdoor and indoor sports events; decision means this weekend's games, including Borussia Dortmund vs Bayern Munich, live on Sky Sports Football, will be affected; no fans allowed for Bayern vs Barcelona in Champions League next week

Bundesliga matches are to be limited to 50% attendance and a maximum of 15,000 fans due to reintroduced Covid restrictions in Germany.

Outgoing Chancellor Angela Merkel and her successor Olaf Scholz agreed a number of measures with the leaders of the country's 16 states, including the reduction of fans at outdoor and indoor sports events.

Bundesliga stadiums, which had mostly been operating on near-full capacity this season, must now reduce their crowds to minimise the risk of infection.

"A temporary limit on the number of fans in the stadium is understandable," German Football League chief Christian Seifert said.

"The DFL hopes that this decision by the federal government and the states leads to an improvement of the pandemic situation." 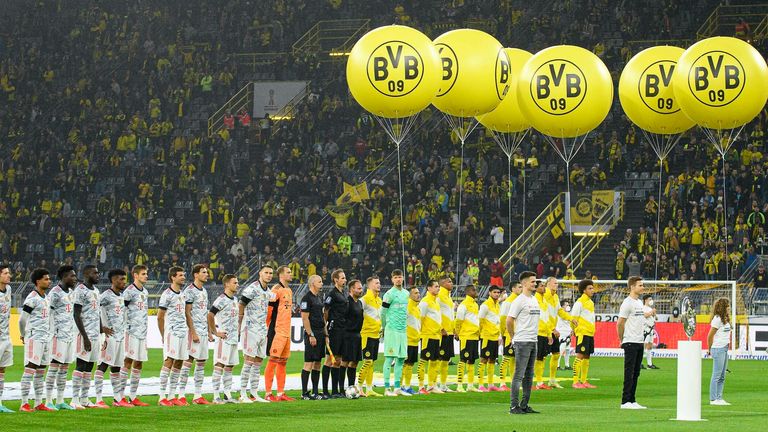 Jurgen Klinsmann reacts to the news that Bundesliga matches are to be limited to 50% attendance and a maximum of 15,000 fans due to Covid restrictions in Germany

The announcement means Saturday's top-of-the-table clash between Borussia Dortmund and Bayern Munich, live on Sky Sports Football, will only see 15,000 fans in attendance.

And although it's something German legend Jurgen Klinsmann appreciates is a necessity due to rising Covid cases in the country, it may just give visitors Bayern a psychological edge.

"It's a pity that Covid is giving us trouble again because a game like that deserves 80,000 people," Jurgen Klinsmann told Sky Sports News.

"It should be packed; it should be emotional and exciting as the fans live this game with all their emotions and energy.

"I still think it will be an exciting game - but when you normally face the 'Yellow Wall' (Dortmund home support) it does intimidate you, whoever you are.

"When you see this massive stand, it does have a bit of an influence because you respect it so it definitely has an impact."

No fans for Bayern vs Barca in CL

On Friday, the governor of the German state of Bavaria announced no supporters will be allowed in the stadium when Bayern host Barcelona in the Champions League next week.

Despite the maximum attendance limit of 15,000, individual states are allowed to set stricter rules if they wish and Markus Sder confirmed Bavaria will bar fans from sports events from Saturday.

Bayern have already qualified for the knockout stages but Barcelona will be eliminated if from the competition if they fail to win and Benfica beat Dynamo Kyiv.