Liverpool's trip to Manchester United may feel like the only game in town this coming Sunday, but there is a tantalising set of back-to-back matches to feast your eyes on across Europe.

Over in France, Paris Saint-Germain travel to face Marseille while Juventus and Inter Milan lock horns at the San Siro in Serie A.

One of the continent's fiercest rivalries takes place in the Eredivisie as Ajax face PSV while the Nou Camp hosts the first Clasico of the season as Real Madrid visit Barcelona.

Sky Sports takes a look at the state of play across Europe heading into a mouthwatering weekend of action...

Ligue 1 - PSG already over the hill?

Paris Saint-Germain head to Marseille this weekend having already established a commanding lead at the top of Ligue 1 under head coach Mauricio Pochettino.

Kylian Mbappe's controversial winning penalty against Angers last Friday - coupled with 10-man Montpellier battling their way to a 1-0 victory over second-placed Lens at the Stade de la Mosson - means there is already a nine-point gap at the summit after just 10 games.

What is all the more intriguing about PSG's record of nine wins from those fixtures is that Lionel Messi last featured in their one defeat, away to Rennes at the start of October. He had only scored one goal in his opening five appearances since his move to the Parc des Princes.

But two goals in a dramatic 3-2 win over RB Leipzig in the Champions League on Tuesday night point towards him hitting form at just the right time.

Marseille, in third, do have a game in hand over this Sunday's opponents with Le Classique taking place at the Stade Velodrome after PSG have been in Champions League action against RB Leipzig. A home win already feels a necessity to keep any hopes of an absorbing domestic title race alive.

Lille won their first domestic title in 10 years and the fourth overall in club history under the guidance of Christophe Galtier last season, but they suffered a fourth defeat of the campaign at newly-promoted Clermont and already find themselves 13 points behind PSG.

There's a surprise leader in La Liga. Real Sociedad occupy top spot and was last weekend's last-gasp winner to beat Real Mallorca the hallmark of champions? Imanol Alguacil's side were beaten at Barcelona on the opening weekend but are unbeaten since, winning six of their nine outings.

Their ascent is all the more impressive given La Real are also having to negotiate the Europa League this term, but the focus this weekend will turn to El Clasico.

It was a nightmare start to the season for Barcelona under Ronald Koeman, a hangover from a tumultuous summer which played out against the backdrop of Messi's departure and the club's crippling financial situation.

Koeman reportedly remains in charge only because Barcelona are unable to afford to pay him off and find a suitable replacement willing to accept a modest salary, but the Dutchman would certainly win over some of his dwindling supporters with a morale-boosting win over Real Madrid this weekend.

It would provide their title chances with a major shot in the arm and lift the club above Real in the table - and the return of the player billed as Messi's replacement provides another boost. Last weekend, Ansu Fati marked his first start in almost a year by scoring one goal and creating another as Barcelona came from behind to beat Valencia 3-1.

Despite being allowed a full capacity crowd for the first time since March 2020, Barça's ground was only half full. A sign of the times is that there remains many seats available on general sale for one of Europe's marquee games in the football calendar - a legacy of Messi's departure and the cast that has been left behind.

Serie A - Napoli setting the pace but Juve on the march

Napoli continue to set the pace in Serie A. Victor Osimhen scored an 81st-minute winner to beat Torino 1-0 last Sunday and ensured Napoli returned to the top of the table.

Having registered a record-equalling eighth win in eight league games, it is no surprise they boast a two-point lead at the summit, with AC Milan in second place.

Last season's champions Inter are one place and five points further back following their first defeat of the season against Lazio last time out.

Felipe Anderson and Sergej Milinkovic-Savic scored late to complete a 3-1 comeback win for the hosts in Rome, and Simone Inzaghi will now look to bounce back on Sunday at home to Juventus.

Both sides are still in the early stages of reacting to the sale of their chief marksman this term, with Romelu Lukaku and Cristiano Ronaldo having returned to the Premier League at Chelsea and Manchester United respectively.

While Inter are also absorbing losses in other areas of their team, it is accurate to say Juve have suffered greater since the departure of the talismanic Ronaldo.

Sat in seventh ahead of their trip to the San Siro, 10 points off leaders Napoli, the side from Turin made a poor start to the campaign - failing to win any of their opening four league matches - but have since enjoyed a slight resurgence.

They continued their march up the Serie A standings with a 1-0 win over AS Roma last Sunday, as Moise Kean's unorthodox early goal sealed a fourth consecutive league win. A fifth victory for Massimiliano Allegri's side would move them above Inter. 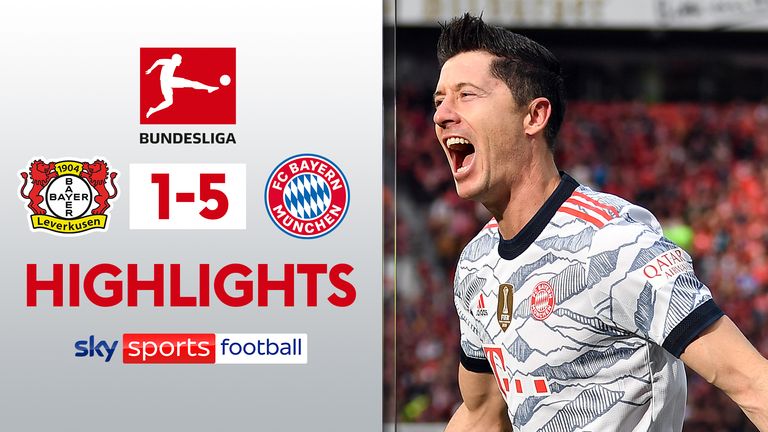 Highlights from the Bundesliga match between Bayer Leverkusen and Bayern Munich

Bayern Munich thrashed Bayer Leverkusen 5-1 on Sunday as Julian Nagelsmann's side ran riot and silenced a stunned BayArena, scoring five goals by half-time to reclaim top spot in the Bundesliga from Borussia Dortmund.

The Bundesliga may often face questions over its competitive balance, but when Bayern flex their muscles in this way, it ought to be considered whether any side in Europe would be capable of matching them stride for stride.

Two goals each from Robert Lewandowski and Serge Gnabry moved them up to 19 points, one point ahead of Dortmund, while Leverkusen remain third with 16.

It fired an ominous warning to their title contenders following on from a powerful statement from the head coach as he started the same XI that had let Bayern's unbeaten record slip 14 days before, at home to Eintracht Frankfurt.

Unlike in France, the chasing pack remain on the coattails of Bayern, who are seeking a record-extending 10th Bundesliga title in a row. Nagelsmann's side host Hoffenheim on Saturday at the Allianz Arena on the same day that Dortmund are at Arminia Bielefeld.

Bayern underlined their supremacy across Europe by thrashing Benfica in the Champions League in midweek, and their next big domestic test comes against Dortmund at the start of December.

Ajax showcased their qualities with a fine 4-0 win over Dortmund in the Champions League in midweek.

The Amsterdam club remain clear at the top of Eredivisie after a 2-0 victory at Heerenveen but PSV's victory at PEC Zwolle means a solitary point separates the two sides ahead of their clash this weekend at the Johan Cruijff ArenA.

Feyenoord were held to a surprise 2-2 draw by RKC Waalwijk in De Kuip last weekend meaning they remain off the pace in fifth spot, six points adrift of leaders Ajax.

Remarkably, Erik ten Hag's side have scored 32 goals so far in their nine league games, conceding just twice, but their home defeat to third-placed Utrecht before the international break shows they are not impenetrable.

Former West Ham striker Sebastian Haller has scored 12 goals this season in as many games in all competitions for Ajax while PSV are on a three-game winning streak.