World Cup: Netherlands vs Norway behind closed doors as host nation goes back into Covid-19 lockdown

Caretaker Dutch Prime Minister Mark Rutte announced a three-week lockdown on Friday as Covid-19 cases in the nation continue to soar; there are also fresh restrictions on the opening times of bars, restaurants and supermarkets

The Netherlands will play their next World Cup qualifier against Norway on Tuesday behind closed doors after a partial lockdown was announced in the country.

As well as professional sports matches being played in empty stadiums, there are fresh restrictions on the opening times of bars, restaurants and supermarkets which will all have to be closed by 8pm.

Before confirmation of the changes came from Rutte there had already been a strong statement from the Eredivisie, whose clubs will again have to play without supporters in the stands when matches resume after the international break.

"This looks like policy poverty," the league said in a statement which was co-signed by the KNVB (Dutch FA) and the Keuken Kampioen Divisie, the country's second tier. "People in The Hague no longer know what to do.

"It is with great dismay that we have taken note of the possible new corona measures. It is more than frustrating to see the cabinet is apparently not looking at the source of infections. 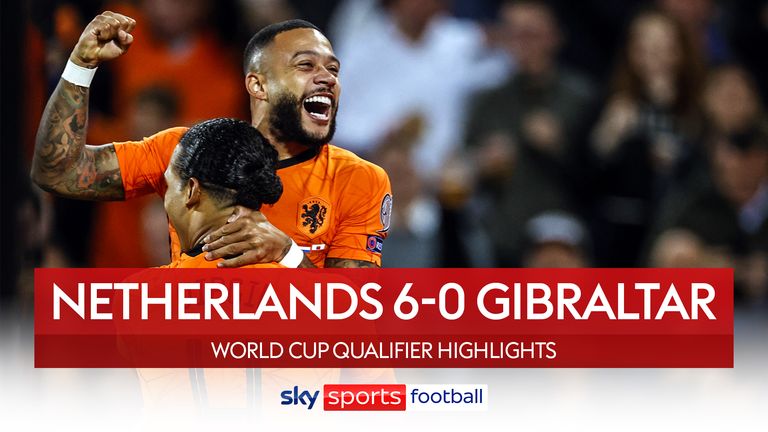 Highlights of the World Cup qualifier between Netherlands and Gibraltar

"These did not take place in the stadiums, as has been demonstrated several times, and yet the line is drawn first on professional football.

"We have invested tens of thousands of euros per location to make everything corona-proof. Hundreds of matches have been played with the public since the first lockdown and not a single match has led to major corona infections.

"We follow the current developments regarding coronavirus, but the measures that have just been announced that affect professional football have no positive effect because there are already no sources of infection in the stadiums.

"Playing in front of a crowd forms the basis of professional football and football fans have been unable or hardly able to attend matches for a year and a half. They are once again the victims of a failed government policy. Football is not the problem, but now seems to be punished again."