UEFA has moved the Champions League final on May 28 to Paris from St Petersburg, following Russia's invasion of Ukraine.

The UEFA executive committee held an emergency meeting on Friday and decided to move the showpiece to the Stade de France from the 68,000-capacity Gazprom Arena in Vladimir Putin's home city.

Following UEFA's move, Kremlin spokesman Dmitry Peskov told reporters on a conference call: "It's a shame that such a decision has been made.

"St Petersburg could have provided all favourable conditions to hold this festival of soccer."

Manchester United have taken the decision to drop their commercial partnership with Russian state airline Aeroflot following the invasion of Ukraine.

UEFA's executive committee also said Russian and Ukrainian clubs and national teams competing in UEFA competitions will be required to play their home matches at neutral venues until further notice.

This is set to affect Spartak Moscow in the Europa League - who were paired with RB Leipzig in Friday's draw - and also Russia and Ukraine in the 2022-23 Nations League which is due to get under way in June.

'It's a human disaster' - Sport responds to Ukraine invasion

Manchester United interim manager Ralf Rangnick says it was "inevitable" and the "right decision" to take the Champions League final away from Russia, describing the situation in Ukraine as "desperately sad". 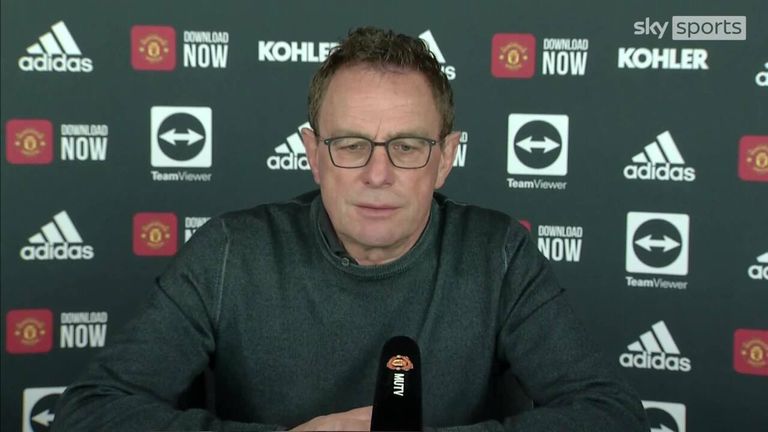 Manchester United Interim manager Ralf Rangnick has agreed with the decision to move the Champions League Final from St Petersburg in Russia to Paris in light of Russia's invasion of Ukraine.

"It's a human disaster what's happening there with all the people involved," he added. "I still cannot believe what I see there. I hope the politicians around the world can de-escalate what is going on there."

West Ham manager David Moyes says the club have given winger Andriy Yarmolenko "a few days off" as the Ukraine international is "not in a very good position at the moment".

"We'll do all we can to help him, it's a really difficult time for him and his family," said Moyes. "I spoke with him yesterday, and he was upset, which you can imagine. We just hope his family keep safe."

Everton's Ukraine international Vitalii Mykolenko is being given all the support he needs, according to manager Frank Lampard.

The defender wrote in a post on Instagram on Thursday about hearing "the anxious voice of my parents who are looking for an opportunity to protect themselves" in their homeland after the Russian invasion.

UK Culture Secretary Nadine Dorries backed the UEFA decision and said "Russia must not be allowed to exploit sporting and cultural events on the world stage to legitimise" its actions.

The European Club Association said they are "deeply concerned" by the situation in Ukraine and described Russia's action as "unacceptable, supporting the UEFA's call to move the final.

Elsewhere, Formula One announced on Friday that the Russian Grand Prix on September 25 had been cancelled, stating that "it was impossible to hold in the current circumstances".

FIFA has yet to take a decision on what to do about next month's World Cup play-off matches.

Russia host Poland in a play-off semi-final on March 24 and would then face the winner of the Sweden vs Czech Republic semi-final in Russia for a place in Qatar.

The federations of Poland, Sweden and the Czech Republic issued a statement on Thursday insisting matches should not be played on Russian territory and demanding "alternative solutions" be found.

FIFA president Gianni Infantino said on Thursday his organisation would look at the matter with "urgency" but said he hoped the situation would be resolved by next month.

Ukraine are due to face Scotland at Hampden Park in a play-off semi-final on March 24, but that match is also in doubt with the Ukrainian league suspended following the invasion.

UEFA under pressure to cut ties with Gazprom

The chief executive of Gazprom Neft Alexander Dyukov, also the president of the Russian Football Union, is on the UEFA executive committee.

The UK government has banned Aeroflot from flying in its airspace and Civil Aviation Authority had suspended its foreign carrier permit.

A Manchester United spokesperson said: "In light of events in Ukraine, we have withdrawn Aeroflot's sponsorship rights."

"We share the concerns of our fans around the world and extend our sympathies to those affected."

Aeroflot has been United's official carrier since 2013, and they regularly fly to European games using the airline.

United did not use Aeroflot for their game at Atletico Madrid on Tuesday. They changed their plans and used charter airline Titan Airways. 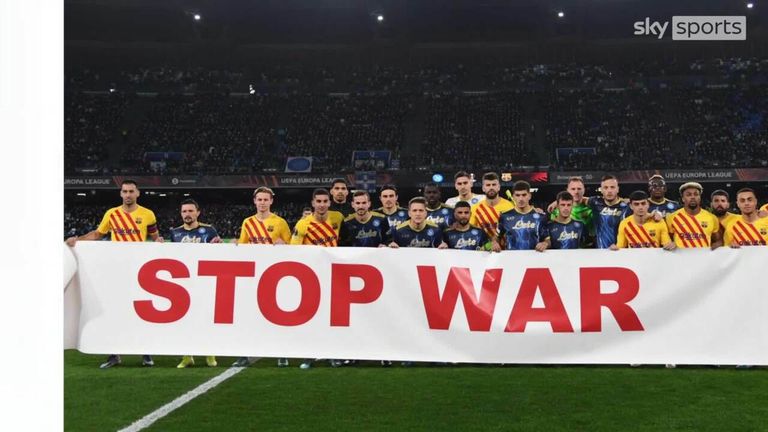 Various football teams and players have been showing their support for Ukraine, including Barcelona and Napoli, and Ukrainians Oleksandr Zinchenko and Ruslan Malinovskyi.

Players, fans and football clubs will be free to protest against the Russian invasion of Ukraine, without fear of punishment from the FA, Premier League or EFL - so long as those displays are not offensive or overtly political.

As the governing body, it's the FA who has jurisdiction in these matters, and there are clear kit and advertising regulations that prohibit the use of threatening, abusive, indecent, insulting, discriminatory, political or religious messages.

But there is widespread feeling among officials displays of support for Ukraine should not be judged in this light. 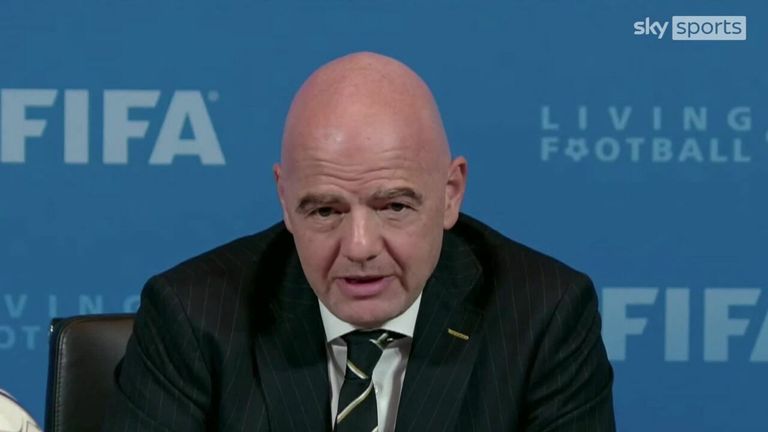 FIFA president Gianni Infantino says they have a duty to monitor the consequences of the Ukraine crisis on football.

It is not an offence to display a nation's flag on shirts or inside a stadium - and Sky Sports News has been told many clubs in the UK are considering adopting the Ukraine flag in some capacity during this weekend's matches, in a show of solidarity. 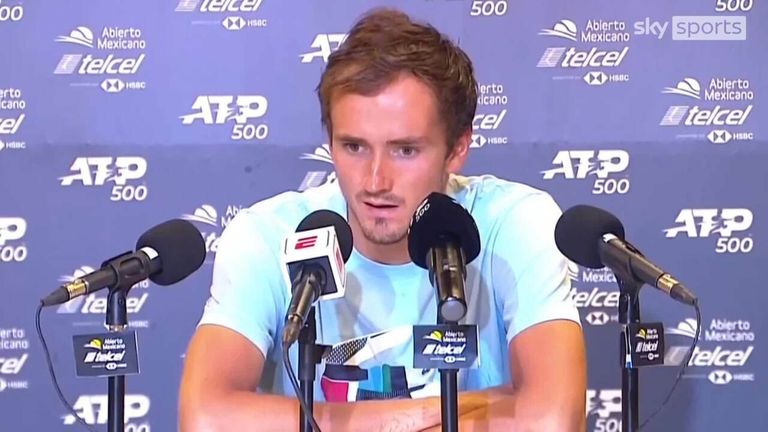 Russian tennis player Daniil Medvedev reacts to becoming world No 1 while his country is involved in conflict with Ukraine.