Rangers will still be without defender Filip Helander, while Kemar Roofe is a doubt for the visit of Sparta Prague; follow with our dedicated live blog across Sky Sports' digital platforms

Team news and stats ahead of Rangers vs Sparta Prague in the Europa League group stage on Thursday; kick-off 8pm.

New Rangers manager Giovanni van Bronckhorst says his players will be well prepared for their Europa League showdown with Sparta Prague at Ibrox on Thursday.

The Dutchman, who worked with his squad for the first time on Tuesday, said: "I think they are ready. It's a new start for them as well with me coming in as the new manager. Of course, we are disappointed with the weekend (losing to Hibernian), but all we do is look positively to tomorrow (Thursday).

"They worked hard and they looked fresh and sharp. We are well prepared for the game and will go for a good result because we want to still be in Europe after Christmas." 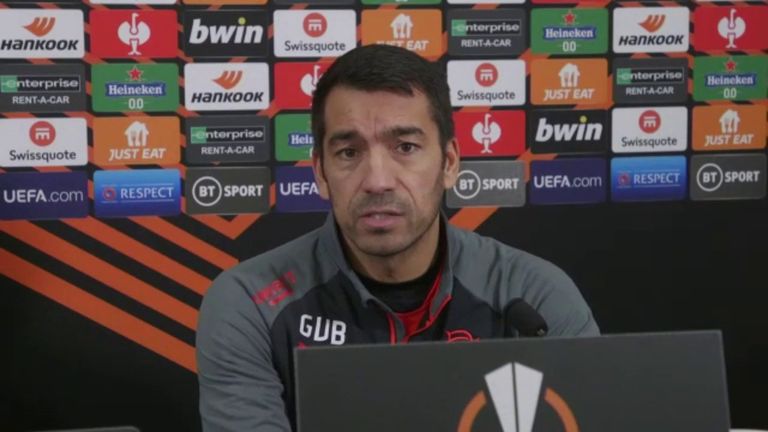 Van Bronckhorst only met his squad for the first time on Tuesday, but he has promised that there will be changes, both in terms of personnel and tactics.

He said: "It's a very short time - only two days to train with the players. But I think they can already sense the things I want to change and what is needed to become successful again. Not only on the pitch, but also the way we behave as a team and the way we have to be prepared mentally.

"You cannot do everything in two days. I need more time. But step by step, I'm sure the players will understand the way I work and the way I want to play.

"I have certain ways of playing against different systems. But you will see a team tomorrow in the system I like to play. It will be a different system against Prague than it was against Hibs (in the 3-1 defeat on Sunday). You will definitely see some changes."

Rangers will still be without defender Filip Helander (knee) and midfielder Nnamdi Ofoborh (heart condition), while Kemar Roofe is doubtful after picking up a knock while on international duty, which forced him to miss the defeat against Hibernian.

Alfredo Morelos and Fashion Sakala are both one booking away from a suspension, though with this being such an important match for Rangers, the pair are both in contention.

Group A - State of play

Rangers are still in with a chance of qualifying for the knockout round play-offs but cannot qualify directly to the last 16.

The Glasgow club will seal second spot if they win their last two games, with the final group match away at Lyon on December 9.