Jadon Sancho vs Mason Greenwood: Who is more likely to be part of England's Euro 2020 squad?

Jadon Sancho or Mason Greenwood? Or both? With the two young talents making strong impressions with their vibrant club form, we look at whether they will convince England manager Gareth Southgate to take them to the Euros

Gareth Southgate will name his England squad for Euro 2020 on May 25 and Jadon Sancho has been busy making a strong case for his inclusion with his form at Borussia Dortmund.

Sancho is vying for a place among England's creative options and has burst into goalscoring form in the second half of the season but given the abundance of attacking talent at Southgate's disposal, there is no guarantee he will be among the names selected this summer for his country.

The tournament approaches amid the backdrop of uncertainty surrounding Sancho's club future. He is contracted to Dortmund until 2023 but as interest in him begins to simmer again ahead of an important transfer window at Manchester United - who failed in their attempt to land him last year - his future prospects for both club and country are somewhat intertwined.

Sancho is back starring under the spotlight but Mason Greenwood has enjoyed his own resurgence in form, scoring 10 goals in his last 14 games in all competitions.

Can Southgate cater for both of them in his 26-man squad? As a big decision looms, we take a closer look at their recent fortunes and what the immediate future might hold...

How has Sancho performed this season?

Sancho got off to a slow start to the season in the Bundesliga, with the youngster receiving some criticism after failing to score in any of his opening 11 league outings.

But a steep upturn in form since the turn of the year has seen him score 12 goals and set up nine more during his 19 appearances so far for his club in 2021.

Erling Haaland has recently been absent with a muscle injury, but Sancho filled the void to score twice in a recent 3-2 win over RB Leipzig. And he added two more in a 4-1 thumping of RB Leipzig that won Dortmund the German Cup.

While not quite reaching the same heights of the 2019/20 season in terms of goals and assists, Sancho's absence was sorely felt by Dortmund as they were eliminated from the Champions League at the hands of Manchester City last month.

But his recent resurgence has helped Dortmund finish with a flourish, following silverware with Champions League qualification.

But could Greenwood be Southgate's wildcard?

Southgate spoke of how Greenwood was deserving of his first England call-up for the Nations League games against Iceland and Denmark last September - a squad which included Sancho - but the 19-year-old hasn't been selected since breaching UEFA's coronavirus protocols while at their team hotel in Reykjavik.

Phil Foden was also part of the quarantine breach, but the Manchester City star re-entered the international fold in November for the fixtures with Republic of Ireland, Belgium and Iceland.

Sancho featured in all three of those games, scoring against Republic of Ireland at Wembley before providing an assist in the win over Iceland, but he was overshadowed by Jack Grealish during the 2-0 defeat to the world's No 1-ranked side in Leuven.

It meant the injury that ruled him out of the March internationals could not have come at a worse time, and with Greenwood still overlooked by Southgate during that last get-together, it appeared increasingly unlikely that both would be part of the final squad this summer.

However, the confirmation this month that the UEFA Executive Committee has approved an increase to 26-man squads could increase the chances of Southgate picking a wildcard, leaving the door open for Greenwood to earn a re-call.

Gareth Southgate's forward options for the Euros include...

Should Southgate take them both to Euros?

While Greenwood offers a range of qualities comparable to compatriot wide forwards, such as Sancho, Marcus Rashford, Jesse Lingard and Raheem Sterling, the United youngster is arguably the most efficient at hitting the target in tight spaces. 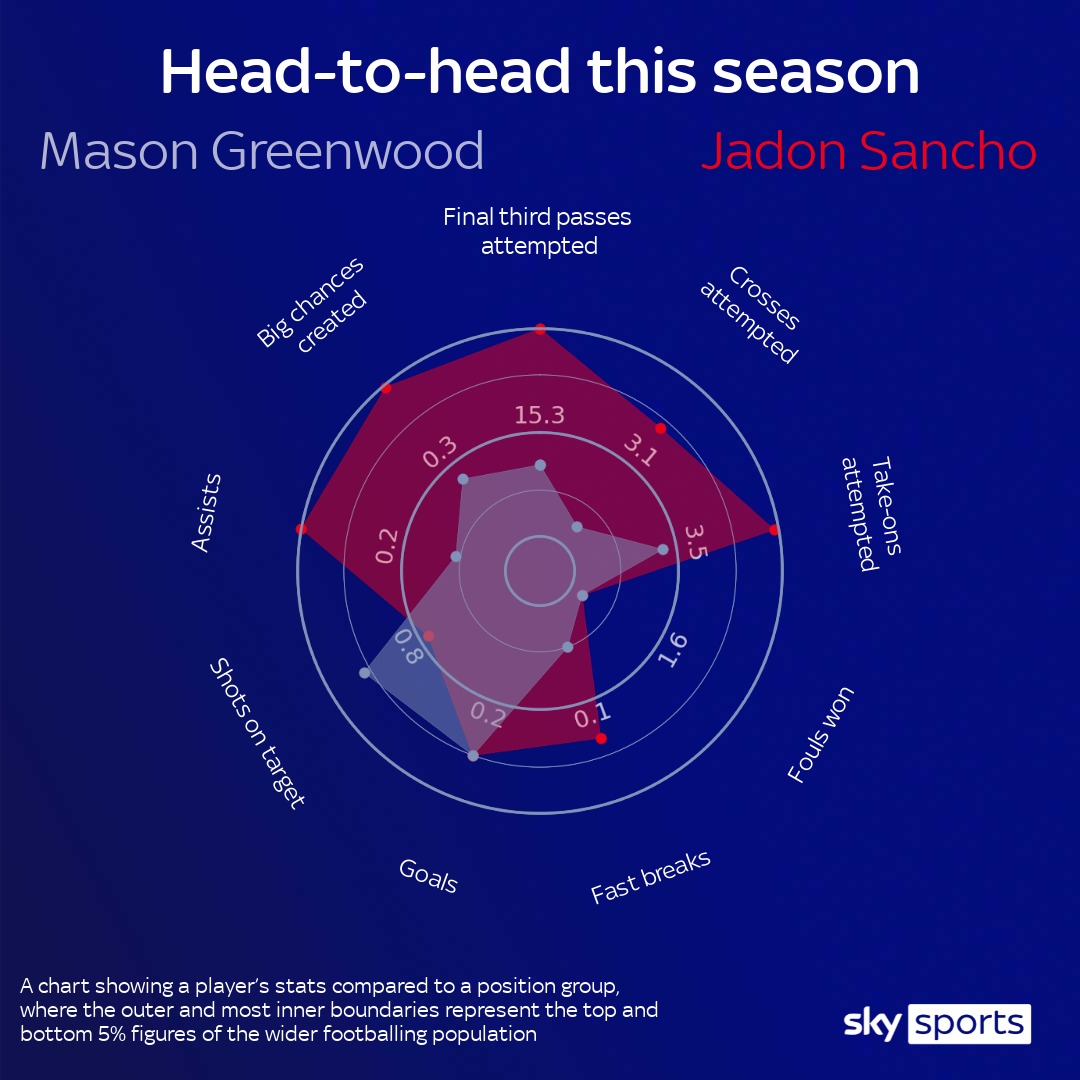 Southgate has an embarrassment of riches with wide forwards who could also assume No 10 roles, but few can slip into a No 9 role confidently. Greenwood can, with assured composure, clinical instincts and a relatively injury-free history.

Sure, England need a preferred back-up striker, but Greenwood would provide additional dynamism within the squad, which certainly poses the question whether there should be space for Sancho and Greenwood this summer.

England squad announcement: What you need to know

UEFA announced each nation can have a squad of 26 players for this summer's European Championships. England manager Gareth Southgate is considering naming a core squad of 23, with a further three players only featuring if there are injuries, suspensions or coronavirus issues.

Southgate will name his 26-man squad on Tuesday, May 25. The squad will meet up on Saturday, May 29 in Middlesbrough, minus those who are featuring in the Champions League final on the same day. England will play two warm-up games for the tournament against Austria and Romania respectively.

Transfer update: Will Sancho future be decided before Euro 2020?

Man Utd are expected to make fresh bid for the England international this summer with Dortmund admitting he could leave if the right offer comes in.

Of course, it is not the first time United have expressed an interest in signing Sancho, who has scored 50 goals in 136 games for the Bundesliga outfit.

The 21-year-old winger was at the centre of a long transfer saga last year, and while a move failed to materialise, Gary Neville believes his former club will prioritise his signing above all else in the coming months.

"If you look at Cavani, Rashford, Greenwood, Sancho, Fernandes and Pogba as a group of players, there is a massive amount of goals and assists in there," he told Monday Night Football recently.

"They might not have that one outstanding centre-forward, but neither do City in some ways. In that pack of United players, there is unbelievable options in terms of goals and assists."

German outlet Bild claim United are keen to make a big statement in the transfer window before the tournament begins, with Sancho now in their sights having tied down Edinson Cavani for another year. It is a move that might just fire United to their first Premier League title since the departure of Sir Alex Ferguson.

'Sancho's preference has not changed'

As revealed on Sky Sports News' Inside Football show, four clubs are interested in signing the Dortmund winger.

"The noises coming out of Germany suggest that Haaland will stay but they're open to offers for Sancho. I'm told that four clubs are interested in signing him. It's thought Man Utd remain keen on signing him and the Dortmund sporting director Michael Zorc has said that Sancho will be allowed to leave under a 'gentleman's agreement' and provided certain conditions are met.

"That will probably be a deadline and a fee. Zorc also said that United almost signed Sancho last summer, which we know about, but the requirements were not met. Dortmund's asking price last summer... remember we were talking about that huge £108m fee... no price has been set this time.

"But the information that I'm getting is that Dortmund could deal at around £80m this summer compared to that much bigger fee last summer. One thing that hasn't changed has been Sancho's preference. He wants to be playing Champions League football next season."

Why Dortmund are willing to sell

Despite feeling the effects of the pandemic, Dortmund's relatively modest debt of £23m means they are not in any desperate need to cash in on one of their prized assets this summer.

The club's chief executive Hans-Joachim Watzke said earlier this year: "If there are going to be no spectators in stadiums next season then we have to start thinking about selling players", and the country implemented tough new lockdown rules to curb a third wave late last month.

But Watzke did add: "Jadon Sancho has been with us much longer than Erling Haaland. We'll have to speak to Jadon, too. If there is an exceptional offer we will discuss it with the player and the agent, as always."

United have been linked with moves for Tottenham's Kane and Dortmund's Haaland this summer but Neville now expects them to focus their resources elsewhere.

"If you look at the policy over the last couple of years since Solskjaer has come in, I don't think they will sign a striker now Cavani has signed," he said.

"They have been desperate for Sancho but didn't get him last summer and were criticised for that, but they could look incredibly smart if they could get him this summer at half the price, having waited 12 months."

Neville believes United could raise funds to sign Sancho by selling some of the attackers on the fringes of the side.

"Juan Mata has done fantastically well for the club but I think he will leave and United can get good money for Daniel James. There's a feeling that Jesse Lingard, having done really well at West Ham, could come back, but I think Ole will say 'no' and tell him to go and explore elsewhere.

"If Man Utd were to sign Harry Kane and Sancho, as an example, would Cavani play? Would Greenwood continue to emerge and have the growth? Where would it leave Rashford? Where does Pogba fit in if Ole wants to play two midfield players like he often has?

"Looking at it, I think Sancho comes in on the right, Greenwood could back him up on that side. Up front, United will have Cavani and Greenwood, who they want to play up front because he is outstanding.

"And then on the left, you've got Rashford and Martial, with Pogba potentially there if not required in midfield.

"If United sign Kane or Haaland, I don't think that works given the way they have recruited over recent years and how they want young talent to emerge.

"Allowing young players to emerge, allowing Rashford to play and bringing in Sancho would be Man Utd's business done."

Jamie Carragher offered a differing view, saying United must still recruit an elite striker in his prime if they are to become title challengers and insisting signing Sancho would stifle Greenwood's development.

"I absolutely love Cavani but I have said consistently that I think Man Utd need a 25-year-old Cavani," he said. "The big thing for me is Greenwood. I think he's going to be a superstar. If you bring Sancho in, he's got to play 70 or 80 per cent of the games on the right-hand side.

"I just don't think Mason Greenwood is ready yet to be the second centre-forward behind Cavani. You've either got a really old guy, who has done brilliantly, or a really young guy, who is maybe not ready physically to lead the line for Man Utd.

"Greenwood has started 19 games this season [now started 20]. The natural progression next season is to go to 30 or 35. I think Man Utd buying a Kane or a Haaland and actually using Greenwood from the right, coming inside on that left foot, would be better.

"I think physically it would help him, because he's not having to hold the ball up with his back to goal.

"I would just be really wary that if Manchester United brought Sancho in, it might stunt the growth of Greenwood. I'm not quite sure at his age he can play centre-forward consistently.

"I think Manchester United need a centre-forward more than they need the right sider and I'm not sure about Greenwood playing centre-forward right now.

"Sancho could come in and play better and get more crosses in, but could he get more goals than Greenwood from that position? I'm not sure."