England vs Croatia: Gareth Southgate's side booed for taking a knee but majority of fans applaud gesture

Before the game, the FA urged supporters who oppose the pre-match gesture to "reflect on the message you are sending to the players you are supporting" ahead of the game

England players were initially booed by sections of the crowd before applause and cheering broke out as the team took a knee ahead of their Euro 2020 opener against Croatia at Wembley on Sunday.

Despite the FA urging supporters who oppose the pre-match gesture to "reflect on the message you are sending to the players you are supporting", the advice was ignored by a small section of the expected 22,500 crowd.

Some supporters had previously booed England players taking a knee ahead of their pre-tournament friendlies against Austria and Romania at the Riverside Stadium in Middlesbrough.

The FA and the England team have continually reiterated taking a knee is not aligned to a political organisation or ideology with fans asked to drown out any boos with applause.

Once the boos were heard inside Wembley, many supporters did begin to applaud while the Croatia team remained standing as they had confirmed they would do so before the game.

England boss Gareth Southgate said last week he would not allow his players to continue to be questioned about the knee and the subsequent reaction once the tournament started.

A UEFA spokesman confirmed ahead of the game the governing body cannot punish any nations whose supporters do react to the gesture.

"UEFA has a zero tolerance against racism and any player who wants to demand equality amongst human beings by taking the knee will be allowed to do so," he said.

"We urge spectators to show respect for teams and players taking the knee.

England's next Group D feature will be against Scotland at Wembley on Friday evening with manager Steve Clarke and captain Andy Robertson confirming the side would take a knee in order to offer a united front. 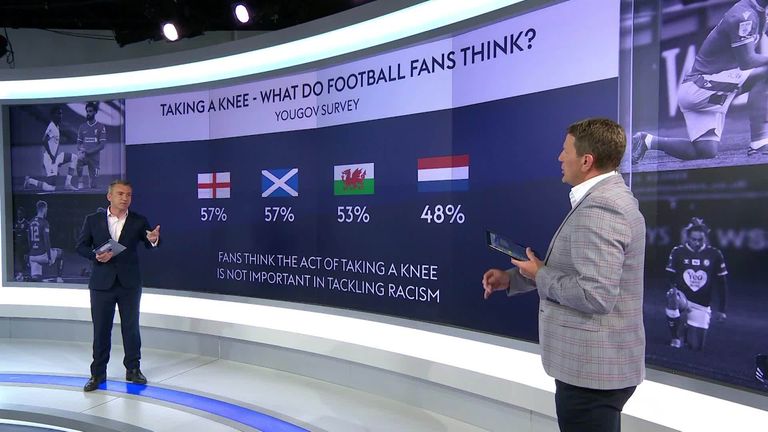 Polling company YouGov held a study in March this year around taking a knee, with 4,500 football fans surveyed across nine countries

More football fans in Europe - including in England, Scotland and Wales - are supportive of players taking a knee than against it, but they are split over the gesture's importance in tackling racism, according to a major survey.

Polling company YouGov has shared with Sky Sports News the results of a study of 4,500 football fans carried out across nine countries in March this year, during the football season.

Most nations and groups had more fans who supported players taking a knee, with opposition mostly coming from a vocal minority.

In England, from a survey of 547 football fans, 54 per cent said they support players and staff taking a knee to support the Black Lives Matter movement. Half of these people (27 per cent) said they strongly support it, with the other half somewhat supporting it.

Some 39 per cent of football fans in England said they opposed players taking a knee while seven per cent said they did not know. In the last fortnight, England players faced boos from some of their own fans attending their final two Euro 2020 warm-up games at Middlesbrough's Riverside Stadium.

YouGov also spoke to a sample of almost 200 ethnically diverse football supporters in Great Britain. Among those fans, 78 per cent said they supported it, 12 per cent did not, with 10 per cent saying they did not know.

There were also high levels of support among fans in some European countries. Portugal had the highest with 79 per cent, followed by Italy (73 per cent) and Spain (71 per cent). Only the Netherlands had less support and more opposition with 44 per cent in favour, and 45 per cent not supporting the move.