Gary Neville: England should have followed through with OneLove armband

The FA "do not have the strength" to take on FIFA, says Gary Neville, as he warns of the damage to its relationship with the LGBTQ+ community; Neville also questions why footballers are under such scrutiny over human rights issues in the Middle East 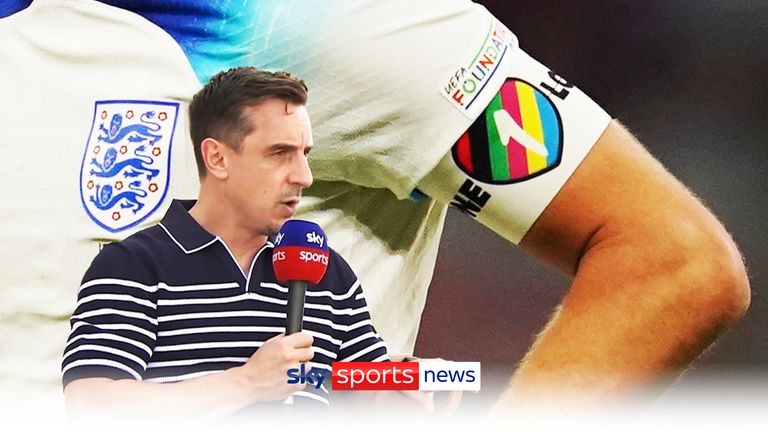 Gary Neville gives an in-depth interview where he speaks passionately about human rights issues in the Middle East, the decision not to wear the OneLove armband and the scrutiny on footballers

Gary Neville has criticised the FA for backing down to FIFA in the OneLove armband row and questioned why footballers are in the spotlight over human rights issues in the Middle East.

England, along with six other nations, decided not to wear the armband and opted for the FIFA approved 'No Discrimination' armband, with the U-turn announced just three hours before their opening Group B 6-2 win over Iran.

Captains Harry Kane, Gareth Bale and Virgil van Dijk have since spoken of their disappointment at not being able to wear the armband, while the Germany team put their hands over their mouths ahead of their opening match against Japan in a protest over free speech.

It was widely reported that FIFA made it clear that players who wore the armband could be shown yellow cards, but Sky Sports News also understands that the prospect of bans was also raised.

"If you do say you're going do something, which is what we have done and what England have done, you have to follow through with it," Neville told Sky Sports News.

"The best thing would've been not to commit to it until you knew that you couldn't do it to start with, if they weren't going to follow through with it."

"The FA have always been a risk-averse organisation," Neville said.

"They have always been an organisation that, when it comes to it, will probably take the safe approach. Let's be really clear about that. That's been for 20, 30, 40 years. You've got people in positions there… I do like Debbie Hewitt - the new chair. I do think she actually, to be fair, has got a great bravery. But to move an organisation like an oil tanker that the FA is, to start taking on FIFA, they don't still have that strength to be able to do that. 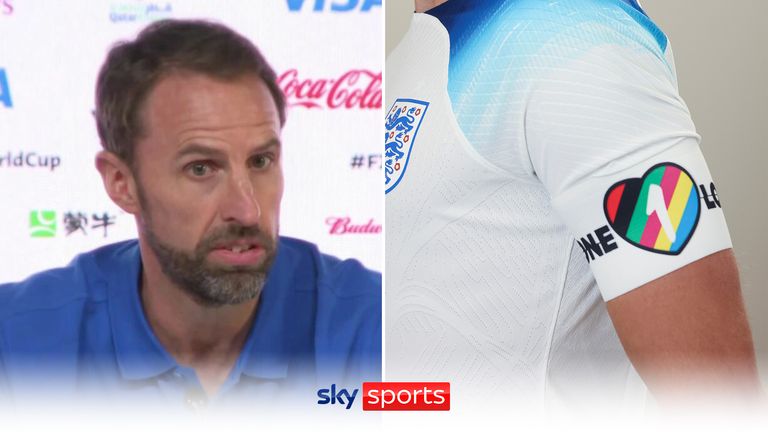 Gareth Southgate says he understands the disappointment surrounding the OneLove armband but insists that the FA take their responsibility around such matters very seriously.

Read Neville's comments in full below as he discusses human rights issues in the Middle East, the decision not to wear the OneLove armband and the scrutiny on footballers

Neville on why footballers are in the spotlight...

"But I think within this tournament we are now looking at football players to take this fight to regions of the world on massive issues that exist not just all over this region, but in Africa and parts of to the Far East, and we know it's illegal to be gay in eight countries that are playing in this World Cup, yet they're still playing in this World Cup.

"We know that we have massive embedded relationships as the UK with this region; on arms, on armed services, on banking sector and finance, in institutions in our country, on energy, political relationships, our royal family have relationships with the Middle East on horse racing. We have F1 over here, we have tennis over here, we have golf over here, but football apparently is the one that has to deal with all these issues, and we're asking football players to put themselves in some pretty difficult positions at times.

"So I think with the LGBTQ+ community will be disappointed, but there is a wider conversation to be had on these things; about the role of football and the role of football players and the role of ex-football players. I'm really interested in it, because I've been criticised heavily coming into this tournament and I actually welcome that criticism. But I'd like to know why it's not okay for Gary Neville to speak for a host broadcaster over here, but we're allowed to sell arms to this country, and we're allowed to have our armed services over here protecting the borders, we are allowed to buy 40 per cent of our energy, our royal family are able to have horses at Ascot and Goodwood. 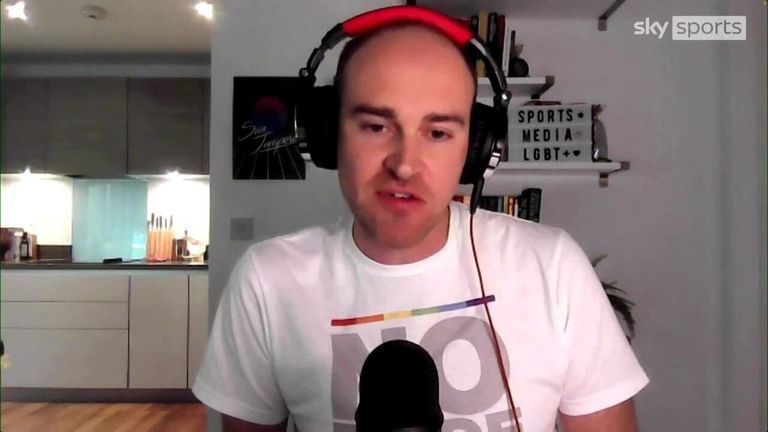 Sports Media LGBTQ+ editor and consultant, Jon Holmes is critical of FIFA for pressurising countries into not wearing the OneLove armband and says a shared sense of unity has been damaged because of it.

"I'm interested to know why these relationships with our political parties, with donations, are okay… why they're allowed to own our banks like Barclays, and London Heathrow Airport, and the London Stock Exchange. I'm interested to know why all these relationships can happen with the Middle East, but me, who has been coming over here for 20 years, who has fantastic friends and sporting and commercial relationships in this country, I want to understand why people think it's hypocritical of me to have relationships with partners over here but it's not for the rest of the UK economy and the rest of the UK networks.

"And football players like Harry Kane at this moment in time are in the spotlight, and they're the ones who are being stood up to account and held to account for not wearing an armband, but I think it's a wider conversation for how the UK in general approaches the Middle East."

Neville on why the World Cup should be in the Middle East...

"I deplore and detest working practices, and some of the cultural and religious beliefs that exist in the parts of the world that I've been to, but it was football that took me to these places. Manchester United and England brought me to the Middle East, they brought me to the Far East, they brought me to Africa. They've told me all my life to enjoy them and to have good relationships in these countries, where the Premier League sell their commercial rights to the same broadcaster that I'm working for, and that's okay… where Manchester United and other great clubs in our country have commercial relationships all over the world in parts of the world where it is illegal to be gay, where working practices are abhorrent.

Football players are the ones who are standing up, who are willing to actually be held to account. But I don't see anybody else.

"I think it's time that football players push back a little bit. Harry wanted to wear that armband. He maybe should've worn that armband and probably should've followed through with it, but are you not saying Harry Kane wants to support the LBGTQ+ community? You don't think Harry Kane doesn't believe in workers' rights or women's rights? Of course he does, but he's there being dragged from pillar to post by FIFA, by the FA, by his own position and the players that he's playing with and the sporting consequence, and it's not an easy thing for a football player.

"We're from low-income, working-class backgrounds - football players - yet people from backgrounds of wealth, which all those other sectors that I've mentioned are, they seem to get off scot-free. I think it's time footballers did push back a little bit.

"We've got a situation where Raheem Sterling, four years ago, made an incredibly brave and courageous statement around racism, whilst party leaders in our country were making statements that were, to be fair, divisive and non-inclusive and discriminatory.

"So my point is, it's football players...in the early part of the pandemic, the health secretary, Matt Hancock, who is currently on television in the jungle, said that footballers need to do more, at the start of a pandemic. This was a situation whereby it was an incredibly emotive situation, everybody was nervous in the country, but Matt Hancock chose footballers to single out. Not any other sector in the country - 'football players must do more'.

"I think football players feel that they should do more. We feel that we should be role models, but also we feel that other people at times should be held to account the same way. The reality of it is, at the moment, football players are expected to do a lot and asked a lot of, and I get that and I want that. I want there to be political intervention and impact through sport and football, but that means we have to be inclusive.

"Should there be a football tournament in the Middle East? Yes. I think if it had been perfectly handled many years ago, we would've had it across the region and not just in one country maybe, but it's here in Qatar.

"The reality of it is, we have it in our country, whereby we have football clubs that are owned by parts of the world which we don't agree with parts of what they do. But I'd rather be sat around the table and having that conversation and challenging it. 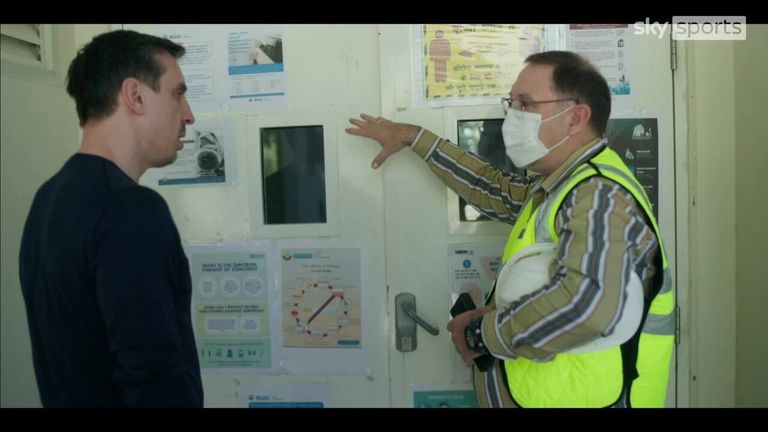 "There are politicians, members of the royal family, there are members of big business in our country who are saying they're not coming to this World Cup while still having billions of pounds worth of deals with this region and massive relationships with this region. Football players are the only people who are putting scrutiny on it.

"The reason that Kafala system has gone in this country, which is the working practice where they remove passports and whereby the employer owns the employee, essentially, and they can't move jobs, is because of the scrutiny of football, and Amnesty International, and the International Labour Organisation - the ILO - coming over here and placing scrutiny on it.

"In other parts of the Middle East where there hasn't been that scrutiny, they still have the Kafala system. So football does create change. There has been change in Qatar that has been positive through football, through the World Cup. Now it's not gone far enough, but I would like to think that this is a journey whereby that fully one day we can get there.

"Ultimately, England had the World Cup in 1966, and it was illegal to be gay and we've gone on an incredible journey on LGBTQ+ and gay rights in this last 60, 70 years - and that's what we should be doing. But this country [Qatar] needs to be on that same journey, and will be on that same journey, hopefully. And maybe football has played a big part in that, because I'm not sure the other sectors have."