Sky Sports News senior reporter Rob Dorsett delivers his latest reporter notebook from Qatar ahead of England's World Cup quarter-final against France; Jude Bellingham and Jordan Henderson's midfield partnership has been key for England so far, but will Gareth Southgate tweak his tactics?

Gareth Southgate has hailed the performances of Jordan Henderson in Qatar, saying he deserves a lot of credit for helping Jude Bellingham to shine in this World Cup.

Henderson and Bellingham have developed a close relationship both on and off the pitch since England flew out three weeks ago - as evidenced by the Liverpool captain's celebration for the opening goal against Senegal in the last-16 match - a goal that was set up by a brilliant run and cross from Bellingham.

Henderson pointed the England fans in the Al Bayt Stadium towards the teenager, saying he deserved all the credit, only for Bellingham to return the gesture and call on supporters to applaud his older mentor.

Southgate says Henderson has never been more influential, and more important for England.

"This is the best version of Hendo we've had," the manager says. "He looks in good physical condition, touch wood. His influence on the group is fantastic, always has been. And to chip in with a goal, he really deserves that." 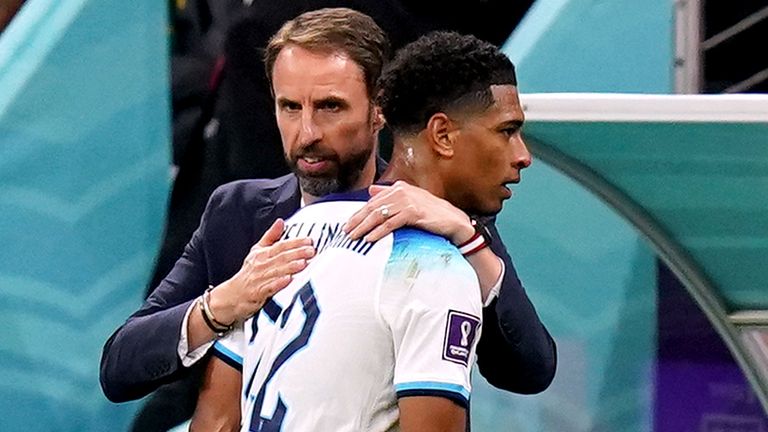 There's no doubt that, as Bellingham has matured, so has his role within the England midfield. He's now won 21 England caps, at the age of 19.

Southgate was searching for the perfect foil to play alongside Bellingham, to give him that freedom to roam. And he thinks he's found it - with the experience and defensive nous of both Henderson and Declan Rice.

"I felt in the game against the United States (the second group game) we were putting tremendous responsibility on Jude and that was a game which was difficult to work out the midfield," he explains.

"It was difficult with the pressing and the problem-solving, and we thought Jordan helped that and we think he's giving Jude a bit more freedom. He does not need to be quite as positionally disciplined."

"At the moment, he's still young and is still learning when to press and when not to press," he explains.

"The positive of that is he turns over so many balls and regains them for you. We've always got to get the balance of the team right.

"So I don't think we should be drifting too far from what we've been."

That last statement from Southgate is key, and hints that England fans shouldn't expect too many changes to his line-up against France.

Neville: France in QF is game of a lifetime 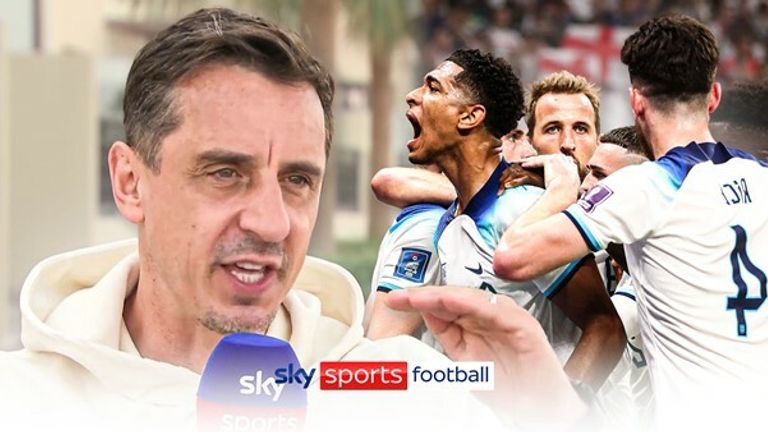 Gary Neville believes England vs France in the World Cup quarter-finals is a "game of a lifetime" and thinks Kyle Walker is the perfect man to match-up Kylian Mbappe.

England set up a huge World Cup showdown with the defending champions after easing past Senegal with a 3-0 victory in the last 16 on Sunday night.

"It's a game of a lifetime on Saturday," Neville told Sky Sports.

"When I think back to my own career and playing in games like that in Euro 1996 or in 2004 and 2006 against Portugal. These games are once or twice in a lifetime opportunities. England vs France on a Saturday night at a World Cup quarter-final, they don't come around in your life very often. They are big moments. I can't wait.

"I don't think the lads will be able to wait for it. This is a game we can lose we know that, they are world champions and a fantastic team. I always think you can go and enjoy games like this as there is less pressure than playing against a Senegal. As if you get knocked out there, all hell breaks loose.

"If you lose on Saturday, unless it's a shambles, which it won't be, you are going to come out of the tournament getting a par. Going out in the second round is a bogey, semi-finals are a birdie and a final is an eagle. And winning it will be an albatross."

England will face France on Saturday night in the quarter-finals of the World Cup after beating Senegal in the round of 16.

England vs France will kick off at 7pm on Saturday December 10.

Prior to England's 3-0 defeat of Senegal, France reached the quarter-finals by beating Poland.

Were they to reach the semi-finals, England would then feature on Wednesday December 14 against Morocco, Spain, Portugal or Switzerland.

The World Cup final is on Sunday December 18.