"I wanted to wear No 9. There are greats who wore it before me. If I can do it justice and get amongst those guys, then you can be remembered forever by these fans"; Callum Wilson aiming to finally show Newcastle supporters what he can do and force his way into England's World Cup squad

"A change of number!" Callum Wilson is beaming. Sat in the new Newcastle strip during the club's media day, he's proud to show off the number nine on his kit.

It may seem like a trivial matter to some but to a striker like Wilson, it means something. And especially at this club.

Wilson encouraged Joelinton to make the switch to number seven, freeing up the iconic shirt worn in the past by the likes of Alan Shearer, Jackie Milburn and Malcolm Macdonald, and believes it can inspire him to do something special.

With the timing of his transfer from Bournemouth last September, Wilson is yet to play in front of Newcastle supporters at St James' Park in a competitive game - but he's determined to give them some moments to remember in this coming campaign.

"I wanted to wear No 9. It's a massive thing for the club," he said. "I will make sure I do the shirt proud, for sure. It's such an iconic number it would be rude not to try to wear it, experience it, and do it justice.

"There are greats who wore it before me. If I can get into that shirt, wear it, do it justice and get amongst those guys, then you can be remembered forever by these fans."

A couple of squad number changes... 👀

Wilson missed a couple of pre-season games but insists he's "feeling fit, feeling strong" for the new campaign, where he'll be trying to surpass his tally of 12 Premier League goals from last year.

His fitness could be key to that. Wilson recorded the fifth-best conversion rate among forwards with more than 10 goals last season but missed around a third of the season with thigh and hamstring issues.

"I only made 23 starts or something like that," he says. "That was a bit frustrating. Missing 15 starts is a little bit disappointing but we're working on that this year to make sure we can get as many games in as possible.

"The conversion rate I was working at was good, so if I'd got another 15 games in that would have taken me closer to 20 goals. So that's the plan this year: to play as many games as possible and keep the standards of being clinical and finishing when I get the chance."

He'll be hoping for more opportunities to come his way too. Newcastle played on the back foot for long periods last season, with just four sides creating fewer chances. But when Wilson and Allan Saint-Maximin were fit and flying in the final months, they looked a different proposition. It's clear Wilson loves playing with the Frenchman.

"Allan is a fantastic talent," says Wilson. "When he's around, he attracts so many players to him that I can make movements on the blind side of defenders and stay out of the way. Then when he gets his head up, make myself free and available for him to pass to."

If the pair can combine regularly, it will be a major boost for Newcastle and boss Steve Bruce. But it will also get Wilson back in the headlines - and with a World Cup on the horizon, that's right where he wants to be.

The forward had to settle for a supporter's role during this summer's European Championships. He was there, inside Wembley, cheering England through to their penalty shoot-out final defeat to Italy and, while he enjoyed the experience, it only strengthened his desire to get back into Gareth Southgate's plans.

"It was unbelievable for me as a football fan, as an England fan," said Wilson, who has four caps for his country and scored on his international debut against USA. "It was good to watch.

"I was dying to get down there and be a part of it on the pitch and playing and experiencing the atmosphere from the middle of the arena. But it wasn't meant to be this year and I was there as a fan, cheering on the boys and celebrating along, shouting, singing. It was nice, a different experience.

What a team performance!! fans were unreal last night, what an atmosphere to be in and amongst 🔥🏴󠁧󠁢󠁥󠁮󠁧󠁿 pic.twitter.com/53MVmHAfLo

"I left the stadium, starving for success and to get back to being a part of that. For me, that's definitely the aim. One of my ambitions this year is to focus on Newcastle week in, week out, make sure I'm playing with consistent performances and then see if that comes off the back of doing well here."

Wilson is confident he can convince Southgate he has a role to play in Qatar next November.

"If I didn't believe in myself, I'd never have got this far in football," he says. "You have to keep believing.

"There aren't many players in the squad who run the channels and run in behind like me. I'd like to think I could add another dimension and complement the other strikers that are there, like I did in the past.

"You don't stay within the squad for 18 months or so if you weren't bringing something different to what was there, with all the talent that was already on show.

"I have the self-belief that if I work hard and focus on my performances here, that ultimately it should get me onto that England stage."

Wilson relishing the chance to play in front of Newcastle fans

But for now, the prime focus is delivering in the No 9 shirt for Newcastle, starting with their Premier League opener at home to West Ham, which is live on Sky Sports on Sunday.

It promises to be a special occasion for the club, with a full house back inside St James' Park, and Wilson is hoping for a fast start to a positive season. After finally scoring in front of supporters in a pre-season game against Doncaster, he's relishing the chance to show the club's fans what he can do first-hand. 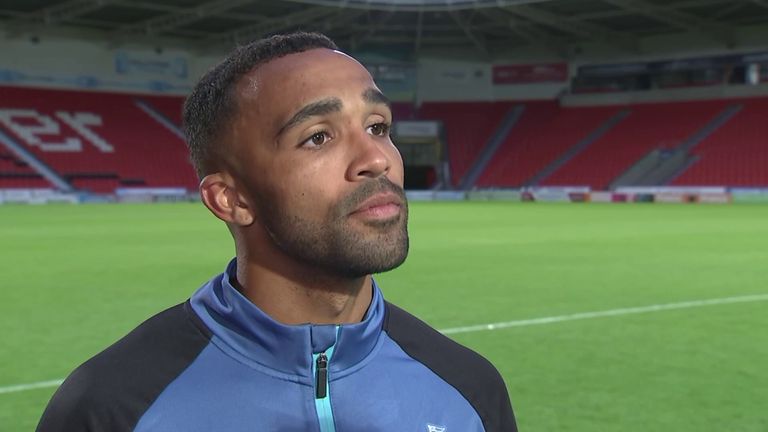 Wilson says it is a great feeling to get off the mark in the No 9 shirt for Newcastle, after he scored in the 3-2 pre-season friendly win over Doncaster

"For us as a club and a team, we need to be pushing each year. Last year was an improvement in terms of league position and then we have to go again," he said. "We need to keep growing as a club, as a team, in our departments in the team. And for us this year, we want to build on how we finished last season and we'd want to finish higher than we did and break into the top 10.

"But we'll take each game at a time, take it slowly. That's the long-term goal but we have to work out how we get there and the process is working hard game by game.

It's such an iconic fan base here. I came in and scored goals, which was nice, but now I want to do that in there with them and share those moments together.

"It's been a little bit frustrating [not playing in front of the fans] but you have to be as professional as you can. You know it's such an iconic fanbase here that they'd all be watching in beer gardens, or at home on television. I came in and scored goals, which was nice, but now I want to do that in there with them and share those moments together.

"I'm yet to experience them as a home player. I've played against Newcastle in the past and they've been fantastic to listen to, so I'm looking forward to that and getting into the stadium with those guys cheering us on and I hope we can do them proud as well."