Liverpool lost Harvey Elliott to a serious injury against Leeds on Sunday but Thiago Alcantara and Fabinho shone in the 3-0 win; "Thiago reminded me of the way Paul Scholes played at Anfield," said Sky Sports pundit Gary Neville

Thiago Alcantara spoke in glowing terms about Liverpool team-mate Fabinho in conversation with Sky Sports in May. "He is a very smart and intelligent player," he said. "He knows how and where to be on the pitch, and he has great strength in challenges."

Thiago was finally beginning to settle at Liverpool after a difficult first season in the Premier League and it had a lot to do with the man whose influence he was so eager to talk up.

At the time, Liverpool had won the last seven games the pair had started together in midfield. Following Sunday's 3-0 victory against Leeds at Elland Road, that number now stands at nine.

The game will of course be remembered primarily for the sickening injury sustained by Harvey Elliott. The suspected dislocated ankle is a cruel blow for the 18-year-old, who had started the season brilliantly. But Liverpool's midfield is in good hands.

Their injury issues prevented Jurgen Klopp from pairing Thiago and Fabinho together for much of last season but there's nothing stopping him now and that's good news for their title chances.

Between them at Elland Road, the pair dominated the midfield, working in tandem to smother Leeds and then pick them apart.

Fabinho scored the second goal. Thiago set up the third.

But those were just two of many standout moments.

Fabinho was in the right place at the right time for his goal and the same could be said for his entire performance. Leeds tried but they simply could not find a way past him.

There was a period of around two minutes in the first half which encapsulated his importance to Klopp's side.

First, he stuck out a leg to prevent a Jack Harrison through-ball from putting Rodrigo in on goal. Then, after Liverpool had lost possession in midfield less than 30 seconds later, he cut out another probing forward pass, this time from Pascal Struijk.

Soon, Leeds were coming forward again. Rodrigo had released Stuart Dallas on the right-hand side. The counter-attack was on. But there was Fabinho, once again, to block his attempted ball over the top before it could reach Patrick Bamford.

Three potentially dangerous situations all stamped out with a minimum of fuss in the space of a couple of minutes. They are not the kind of interventions that appear in highlights reels but they are crucial nonetheless - and they are Fabinho's speciality.

At the halfway point of the game, the 27-year-old had made a total of five interceptions - one more than the other 21 players on the pitch had managed between them.

It was typical of a player who acts as a security blanket for this Liverpool side and, against Leeds, he also ensured there was cover in place when Joel Matip and Virgil van Dijk carried the ball out of defence.

Matip and Van Dijk's forward bursts were a feature of Liverpool's performance at Elland Road. The tactic was used by Klopp in order to destabilise Marcelo Bielsa's man-marking system but it was only thanks to Fabinho's intelligent positioning that it worked.

Each time one of them went, Fabinho dropped in behind them. Liverpool's centre-backs were free to charge into the final third and Leeds found themselves outfoxed and outnumbered.

It was Matip's pass, remember, that allowed Trent Alexander-Arnold to set up Mohamed Salah's opener. All the while, Fabinho was waiting to snuff out potential counter-attacks behind him. 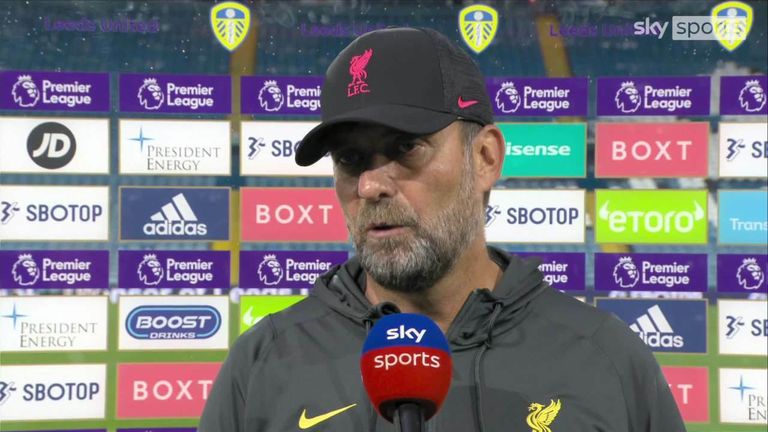 Jurgen Klopp says everyone is in shock after Harvey Elliott's injury

Fabinho did not do the defensive work on his own. In fact Thiago made more tackles (four) and more ball recoveries (10) than anyone else on the pitch. But the Spaniard's main duties are with the ball at his feet and that's where he truly excelled at Elland Road.

"That Liverpool midfield wasn't perhaps the most athletic or mobile," said Gary Neville on the Gary Neville Podcast afterwards. "Klopp could have played Jordan Henderson, James Milner and Naby Keita to match Leeds up. But it was all about composure.

"Thiago reminded me of the way Paul Scholes played at Anfield. There would be a frantic spell in the game and all of sudden there would be a small guy in the middle of the pitch who would get his foot on the ball and there would be calm and peace.

"Michael Carrick could do the same and Thiago did the same today. It was an example of what he has been signed to do. When it's frantic and desperate, put your foot on the ball and play the pass that opens the game up. He did that."

Leeds did their best to press him. In fact, Kalvin Phillips could be seen breathing down his neck as early as the first few seconds of the game. But Thiago evaded his marker's close attention on that occasion and it was the same story for the rest of the afternoon.

The deft pass to set up Sadio Mane's goal was one of 38 in the opposition half over the course of the game. Nobody else got close to that total and no Leeds defenders could get close enough to him.

Klopp was understandably downbeat after the game. Elliott's injury was a shock to him and his players. But he will approach the challenges ahead knowing that in Thiago and Fabinho, Liverpool have a midfield axis to take them forward.