If Marco Silva had thought this season was going to be a stroll in the park for Fulham, then last Saturday would have provided something of a wake-up call.

Fulham were top of the table, cruising off the back of four wins in a row before the international break. Newly promoted Blackpool were winless and yet to pick up so much as a point at home. Naturally, the Tangerines ran out 1-0 winners at Bloomfield Road.

One key factor to take into account for Fulham, however, was the absence of attacking midfielder Fabio Carvalho. The 19-year-old Portuguese-born England youth international was handed his debut late last season by Scott Parker as the club headed towards Premier League relegation. He has been a revelation so far this campaign, and was badly missed at the weekend.

"He's a very good player," Silva told Sky Sports. "I don't want to compare him to other young players I have worked with, because I have worked at clubs - like Sporting in Portugal - which have amazing academies and players that were the same age as Fabio.

"But I can say he has very good quality for the age he is, and some maturity for a player that has only just turned 19. He moved countries at a young age and had to adapt to life in England, but that has helped him grow and develop.

How to watch midweek Championship on Sky

Here is how you can watch midweek Championship matches across Sky Sports this season.

"He comes in every day with a smile on his face to work. He enjoys his time on the training ground, but he works really hard too.

"He understands what I want from him. It is up to him to keep working hard, and it is up to me to keep developing him as a player, because he has the talent."

The defeat to Blackpool was a blot on what had so far been an excellent return to the Championship for Fulham. Four wins and a draw in August saw Silva pick up the Sky Bet Championship Manager of the Month award.

He has quickly rallied a squad and personally adjusted well to the second tier, with his only previous experiences in England coming in the Premier League with Hull City, Watford and Everton.

He left Everton in December 2019 and spent nearly 18 months out of the game - mostly during the midst of the global pandemic - before joining Fulham in the summer.

"I have to be honest, it was always my priority to come back to England," says Silva. "I had other opportunities to go elsewhere around Europe and manage in some great competitions, and I had some opportunities in the Premier League and some in the Championship.

"Normally if I have a break I would travel to see live games, meet different people and talk football, but obviously we couldn't do that. And it was hard, because football is what I love.

"When I came back to England to Fulham, the battery was full and I was ready to go again."

All three of his management jobs in England may not have ended quite the way he would have wanted, particularly at Everton, but Silva certainly feels he has improved as a manager during that time. Now aged 44, His relaxed demeanour suggests a figure who has learned from his experiences.

"I'm a better manager now than I was before I first joined the Premier League," he says. "I came from Sporting and Olympiakos where we won titles and played in the Europa League, which has its own demands.

"But the Premier League was a different kind of challenge. Every week you play against the best teams, managers and players. It's something I demand from myself and from my staff to prove our quality and to get better every single day.

"I joined Hull in 2017 and now I'm at Fulham. I have to be better than before because of all the experiences I've had, the good and the less good moments. It makes you more able to handle everything that happens in your career." 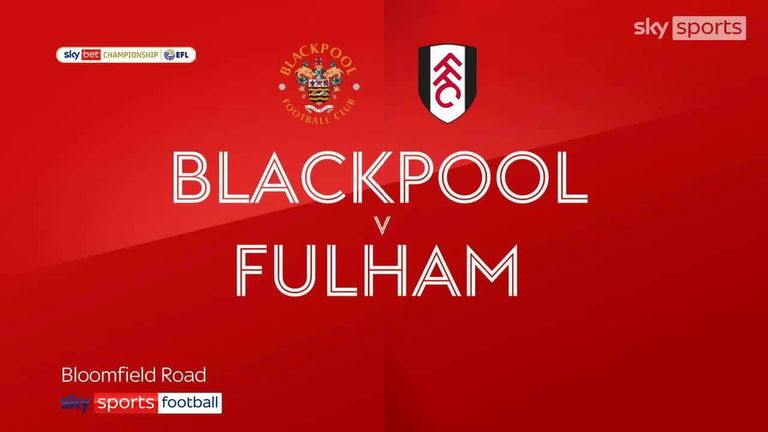 Highlights of the Sky Bet Championship clash between Blackpool and Fulham

All Silva's experiences so far should be to Fulham's benefit as they look to bounce back to the Premier League. Promotion is expected, he knows that. It has, after all, occurred in their last two Championship seasons.

The real challenge for Fulham, you feel, would be staying in the Premier League. But that is not something he wants to talk about, as he feels it would be disrespectful to the rest of the league.

"It's such a tough competition and a tough league to play in," he says. "The games come quickly, and you don't always get time to prepare.

"There are good teams and good managers. There are times where the game looks in control, then it can change in a second. We need to be able to deal with that.

"We are in the Championship, and we have to respect the competition and our opponents. We won't hide what our targets are and we have to be ambitious, but we are not playing in this league alone.

"We have our standards and our aims to be successful, but we haven't won anything yet. If we were in sixth or seventh position, my answer would be the same. I can't talk about the past or the future. I'm here to talk about building right now."