Blackburn boss Tony Mowbray has questioned whether a return for football is possible while social distancing measures continue to remain in place.

The Championship season was due to conclude today and the EFL directive remains one committed to finishing the campaign, albeit likely behind closed doors, when it is safe and reasonable to resume.

However Mowbray, whose Blackburn players are working provisionally towards a return to training on May 16, says he is unsure of when the right time will be.

"People with gloves, people with masks - it is just an unbelievable scenario and it makes it quite scary," Mowbray said of his experience of lockdown.

"How we are going to go up for corners and challenge for headers and make tackles and have all the physicality that football is going to have, if we're still doing that [social distancing]? It doesn't make sense." 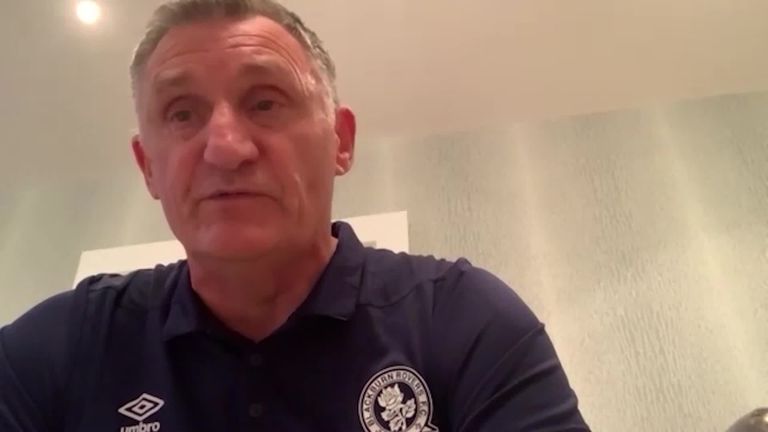 The EFL have discussed the prospect of finishing the season in a 56-day window, with the prospect of multiple games a week until the conclusion of the 46-match schedule.

However they have also previously warned that a return might not be feasible until adequate testing measures are put in place.

Blackburn sat three points outside of the play-off places at the time of the suspension and Mowbray believes an inspirational mentality will be more important than fitness in determining how the season ends.

That's despite the obvious concerns about match preparedness without the intensity usually provided by a Saturday-Tuesday football calendar, but the Rovers manager says it's the same concern for all clubs who have had to train remotely.

Other issues remain unsolved for Mowbray, too, particularly around the logistics of ensuring the safety of everyone involved is safeguarded and he concedes he doesn't expect a quick solution.

It comes days after Deputy Chief Constable Mark Roberts, the UK's most senior police officer for football, said there would need to be a rethink if restarting the football season saw officers having to disperse crowds from stadiums.

"The world is missing football, but I don't think we should be compromising the health of the staff, of the players, of the officials, of the people who would have to be around stadiums," Mowbray said.

"Even empty stadiums, who is getting the balls back? Little things, everything has to be thought about. I can't see a quick start to this solution. I'm not sure what it is.

"It's a really difficult one while the rest of the world are social distancing and worried about their relatives, that football you could even think about people tackling, and challenging and going up for corners, jumping on each other's backs or naturally shaking hands."