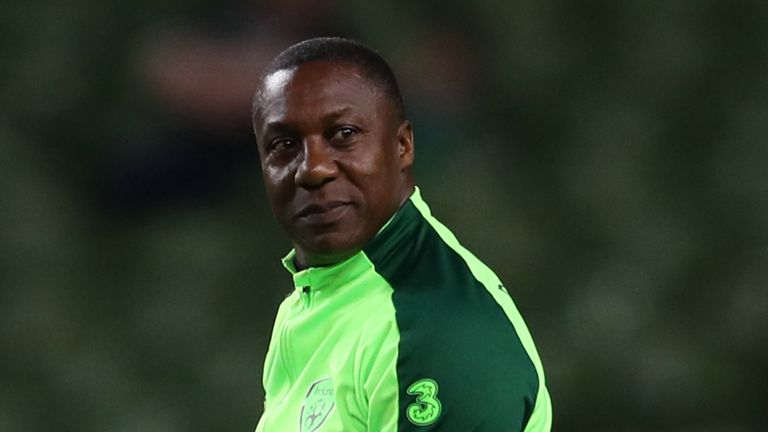 Republic of Ireland assistant manager Terry Connor says he hopes the Rooney rule can be a 'stepping stone' towards equality, but admits he has some reservations about it

Republic of Ireland assistant manager Terry Connor has spoken out for the first time in his 25-year coaching career about his struggles with racism in football.

The date is June 22, 2008. Paul Ince has just been named manager of Blackburn Rovers, becoming the first black manager in the Premier League.

Many thought and many more hoped that it was a turning point. But in the 28 years of the Premier League, only nine black men have managed in England's top division.

One of those is Connor. He had 13 games in charge of Wolverhampton Wanderers in 2012.

"Maybe Paul getting that job will still change things," he said.

"I worked with Paul for a few years at Wolves, and he deserved that job. It did feel like a big step forward, but it's a process, and it might take generations for us to get true equality." As a teenager, Connor was on the books at his home town club, Leeds United, in the late 1970s.

He's told me - and his children - how he had to run away from white youths when he was a schoolboy player there, catching the bus to Elland Road from his home in the Chapeltown area.

Connor still remembers how he would always sit near to the driver on the bus, so that he didn't have to run the gauntlet of the young white men towards the back seats. They would bully and beat him. Because he was black.

He's experienced racism throughout his career, as a player and a coach.

The 57-year-old talks about the "overt" abuse he's suffered from the stands, and from others in football, but he has much greater concerns about the hidden racism, that he feels points to a much deeper problem. Football club owners must ask themselves why the number of black managers in the game remains so low, according to former Liverpool defender Stephen Warnock

And for this, you can't separate football from wider society.

He told Sky Sports News: "I remember when my wife went into labour unexpectedly, I rushed to the hospital in some scruffy clothes. The receptionist kept me waiting.

"I kept saying 'excuse me', but she kept on doing other things. Eventually, I said I was here to see my wife who was about to give birth, and she said: 'Oh! I'm sorry. I thought you were a taxi driver.'

"I don't think she had any idea about her prejudice."

Terry Connor's coaching career has largely run in parallel with Mick McCarthy's - whenever the Irishman got a job, he wanted Connor alongside him.

He's currently McCarthy's assistant for the Republic of Ireland national team until both their contracts expire next month.

It's a role he's performed at Bristol City, Bristol Rovers, Swindon, Wolves and Ipswich. But only under McCarthy, who he calls "inspirational", has he been given the title of "assistant".

He is sure that his skin colour meant he has been undervalued at times in the past, and not given a proper title.

When he was Reserve Team manager for Wolves from 1999, he says it was so rare to see a black man in a position of authority, he often wasn't recognised.

"We used to go to away games and have a pre-match meal," he recalls, "the players would eat separately from the staff.

"As the hotel would want us to sign for the meal, of the six around the table I was the only black guy.

"And the hotel staff would present the bill to the goalkeeping coach, or the physio, or the kit man. And they'd present the cheque to everyone, bar me.

"All the staff would say, 'I'm not authorised to sign for that' and it would go around the table, until finally it got to me.

"It would be wrong to call it a standing joke, but it happened on so many occasions. It was clear they thought 'he must be the boss - it can't be him!'"

Connor's son is currently studying for a Masters degree in Sports Science in the United States. Even before the killing of George Floyd, he warned his son to be wary of the police, and take measures to keep safe.

He explained: "We asked him to be extra aware of his surroundings, and know that America is a different place. We needed to know we had done everything as parents to keep him safe."

Here in England, Connor is supportive of the efforts the FA are making to improve diversity across the association, but he says there is an awfully long way to go.

He was part of the FA's first BAME coaching placements programme in October 2018, aimed at solving the under-representation of minority coaches in the game.

"It was a privilege to work alongside (Lee) Carsley and Aidy. But what I noticed there, was that 15 of the 23 players in the England squad were black, or from an ethnic background. And yet I was the only black person in a support staff of 22 that worked with those players.

"This is not against them - they're highly qualified people - but with a squad where 15 of the 23 were black, within the support staff there wasn't any representation. And I was only there really as an observer, for 12 days." Despite these experiences Connor says now, more than at any other stage in his lifetime, he's optimistic equality can be achieved in football. Not that he thinks it will happen any time soon.

"There seems to be a feeling of good-will in the football fraternity now for that element of change.

"I see Raheem Sterling, I see Marcus Rashford, speaking out about things, and when they do that, they continue carrying that flame of hope that change can occur.

"The (black) players in my generation, and before and since, have given the players of now a voice, a better platform to speak out on things.

"To the point now where they were very close in an England game to walking off the pitch, because they didn't agree with what was going on in the crowd. So for them to have that level of voice, can only be good for football."

"You'll always need someone to be the first, to break down the barriers, or someone to climb on someone else's shoulders until we get to the top of the mountain, and maybe we've got to that point where we are the backs, if you like, for future generations to come through, and have the equality to be able to succeed on a level playing-field."