In an exclusive interview with Sky Sports, Nuno Espirito Santo explains the thinking behind the evolution of his Wolves team. Watch Leeds vs Wolves live on Sky Sports Premier League and Sky Sports Main Event from 7.10pm on Monday; Kick-off 8pm

The Portuguese have a saying. Quem não arrisca não petisca. Literally, those who do not risk, do not have a snack. In English parlance, nothing ventured, nothing gained.

After consecutive seventh-place finishes in the Premier League, Wolves are enjoying their best period in 40 years. In August, they reached a first European quarter-final in almost 50.

As a result, there was some surprise when two favourites departed in the summer. Diogo Jota, one of the central figures in that thrilling European campaign, was sold to Liverpool. Matt Doherty, the club's longest-serving player, made a shock move to Tottenham.

Wolves' counter-attacking expert and their wing-back turned poacher had unique roles in this Molineux success story. They will take some replacing but what is so intriguing is that head coach Nuno Espirito Santo is not looking for replacements. He wants something different.

"We are looking to evolve our game," Nuno tells Sky Sports.

"We have a lot of work to do and it will take time, patience and persistence.

"But I think this is the way."

Nuno is speaking exclusively to Sky Sports before his press conference ahead of Wolves' game against Leeds at Elland Road, live on Monday Night Football.

He has spent the international break doing what he does best - analysing football matches. "I watched all the games in which our players were involved," he says. When the matches were being played at the same time, he would watch one and then record the others.

He will have seen reminders everywhere of just how far Wolves have come. 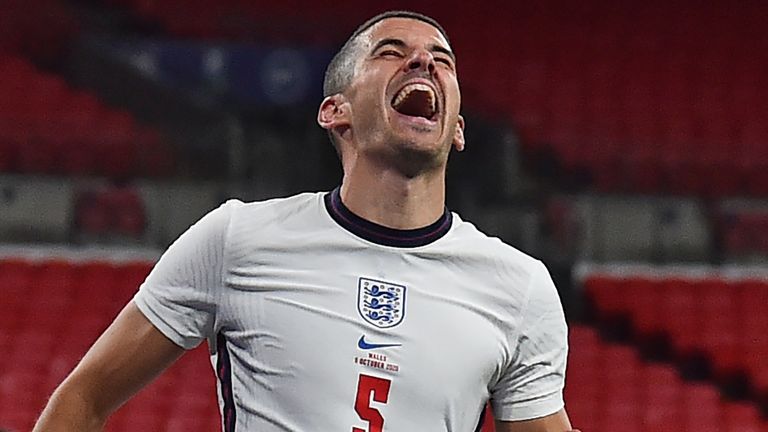 Why the need to evolve, then, when things are going so well?

"One is simple. Our opponents know us better, so we cannot be so predictable. That has to make us move forward but I do not see it as a risk. I see it as something that should give us more confidence to compete. Having more weapons only makes you better.

"With how the game in the Premier League is going, we cannot just stay the same. We must evolve and change and do different things. It is about adding more and more new details."

We are looking to evolve our game. We cannot just stay the same. We must evolve and change and do different things.

If there was a moment that crystallised the need for this Wolves team to take another step forward, perhaps it came in that quarter-final defeat to Sevilla in the Europa League.

There was no shame in losing 1-0 to the eventual tournament winners, but the sight of his side having just 24 per cent of the ball in Duisburg caused Nuno to reflect afterwards.

He spoke at the time of the need to "have more time with the ball" and his comments about his starting line-up being "the same as the first season" made explicit his desire for progress.

It has informed his thinking in these early games.

A more fluid Wolves is emerging.

Daniel Podence's run down the left flank set up Jimenez for the opening goal in the win over Sheffield United on the opening weekend, but his nutmeg on Kevin De Bruyne prior to assisting the same player for Wolves' goal against Manchester City came from the right.

Pedro Neto's winner against Fulham was scored from the left channel but he has been used on the right, as a withdrawn forward while Jimenez drifts wide, and even as a midfielder already this season. What was once seen as a rigid formation is becoming more flexible.

"With Pedro's game, if he drops a line, this gives us small pockets where we can try to look behind the opponent's midfield. There are a lot of things that we are working on." 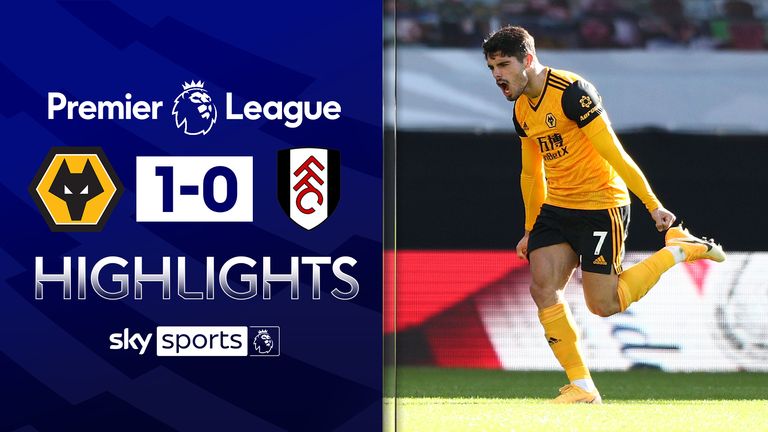 Nelson Semedo and Fabio Silva were the most expensive new additions, but experienced Brazilian defender Fernando Marcal has come in and is expected to feature against Leeds, while there has been a Premier League debut for Portuguese youngster Vitinha too.

Do Wolves have even more potential now?

"We cannot measure that, it will be something for the end. But what I feel we must do now is not rely on the players that came into the squad. The core of the squad must keep growing. This is our process. It is not just about who comes in making us change and evolve, no. It is the ones that are here - with the help of those who came in - who must grow."

As well as asking for more from Neto, this season has already seen Adama Traore used at wing-back and in subtly different ways further forward. "It is different when you have Adama in a three or a two." Romain Saiss was at wing-back against Fulham, but also took up positions infield to help form a three-man midfield and block the counter-attack.

After a long period in which every movement by a Wolves player had come to feel automatic, Nuno is giving his players new tasks, adding complexity in the hope that, ultimately, it will make winning football matches easier for his team.

The Wolves head coach can feel like a closed book when talking to the media, with fans now familiar with his repetitive lines about improvement and the importance of the next game.

When he does open up and go into more detail, there are the occasional pauses. "It is very hard to explain," he says with a sigh. "I would do it better with a paper or a board, for sure."

But then, just like that, he is off again, giving a tantalising glimpse into the depth of thought that has gone into the adjustments to Wolves' shape and his vision for the future. 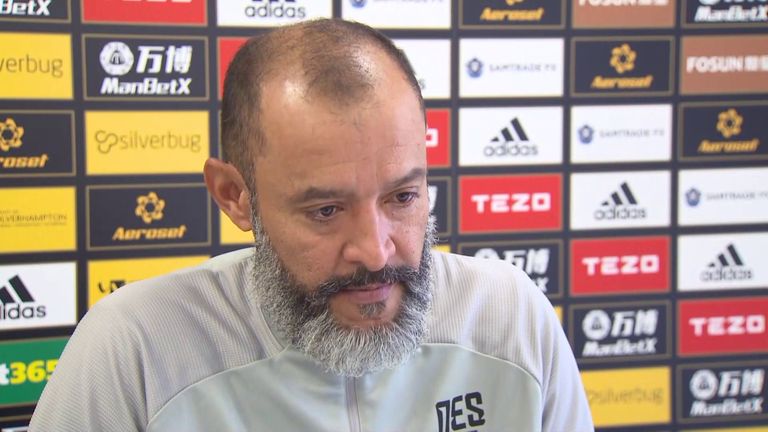 "It is not just always about the counter-attack and I do not consider that we were not a team of possession," he said. "We have always been able to manage large spells of possession of the ball. But it is now about trying to create a possession that is more clinical.

"Risk has to be something that we are willing to take in some parts of the pitch. It is about having the confidence to persist even when there is a mistake. That can give us not only different lines but different reactions to the loss of the ball and when we recover it.

"It is all about pieces, individual situations. Complicities. It is not about changing one player, it is about creating societies with different movements and different lines. Creating versatile, dynamic situations where players appear in different parts of the pitch.

"It also has to do with the role of our full-backs. Our game relies a lot on the influence of our full-backs. For example, Doherty gave us a lot of penetrations inside. On the other side, now we don't have Jonny [because of injury] so this brings different things to the team too.

"I cannot share with you all of these things but what we are looking at is if we had these lines before, we must now search for different lines because the players are different and the better solutions for them to take advantage of their talent are in different spaces."

The highly-rated young French left-back Rayan Ait-Nouri is expected to make his debut soon, while Semedo has been deployed on the right. The former Barcelona player has taken Doherty's place in the team but not necessarily, as Nuno makes clear, his role in the team.

"I believe that you cannot ask the same things of different players. What you must create is a base and then let the strong points of the player show themselves in those moments. You cannot ask others to do the same things, I totally don't agree with that.

"By changing the players, naturally things will change and you have to take advantage of those things that the player does better when you provide them with freedom. That normally comes in the offensive part of the game but it also applies to our defensive shape.

"It is different now."

The hope, it seems, is with Semedo staying wider, coupled with the presence of a left footer on the other flank, this will create more space for the forwards inside to exploit.

But these tweaks have not come without an impact at the other end, where wide-open Wolves were exposed in the 4-0 defeat at West Ham - the biggest reverse of Nuno's reign.

"We made mistakes that we cannot repeat," he admits.

"That was a useful step. A painful one but it makes you react. Fortunately, we were able to sustain a clean sheet in the next game. Now it is about consistency. Sustaining those levels.

"It is going to take a lot of work. We need more time and we need to take advantage of the time that we do have. The game is always the best moment to test ourselves."

The next test comes at Leeds and what the Wolves boss describes as the "peculiar" challenge of Marcelo Bielsa's side. "The way that they defend and their aggressiveness in the way that they react to the loss of the ball, it is almost unique in our day," says Nuno.

"To compare it to what we do, it is different, for sure. But you cannot change your idea based on who you are going to face. It is a confrontation of ideas on the pitch."

As for Nuno's own idea, does it excite him as much ever?

"Of course it excites me. I would be even more excited but to compete without fans is not the same. More than being excited, it is that we are aware of what we have to do."

Perhaps the changes could even include allowing Coady to go up for set pieces now he has demonstrated his potency in the opposition penalty box for England?

"But when we do it, let's try to surprise our opponents."

This need for surprise is typical of the thinking that is underpinning Nuno's plans for the evolution of his Wolves team. It will be some time before anyone knows for sure whether it will work, but...