Leeds captain Liam Cooper told Sky Sports News: "Me and the players are really fortunate and we are in a position to help and therefore we are delighted to support the campaign from Leeds City Council inspired by Marcus. No kids should go to bed hungry."

The Leeds United squad have pledged £25,000 towards Marcus Rashford's campaign to end child food poverty in the UK.

Rashford has been urging the Government to continue their free school meals programme over the upcoming school holidays, having already successfully forced them to extend the scheme over the summer.

The 22-year-old's campaign was put forward for a vote in Parliament by Labour, but it was rejected. However, an ever-growing number of councils and businesses are committing themselves to Rashford's proposals.

And Leeds captain Liam Cooper has now announced he and his team-mates will join the efforts to help the Manchester United and England forward reach his goal.

He tweeted: "Let's do this Leeds! No children should ever go hungry. £25k guaranteed from the Leeds squad. We stand with you Marcus Rashford."

Cooper also told Sky Sports News: "Me and the players are really fortunate and we are in a position to help and therefore we are delighted to support the campaign from Leeds City Council inspired by Marcus. No kids should go to bed hungry."

Frank Lampard has praised Marcus Rashford's "fantastic" campaign against child poverty, while Jurgen Klopp says it is "absolutely incredible" what the Manchester United striker has achieved.

Chelsea head coach Lampard said: "It's been great to see young players with personality, with a voice, speaking up for things that they care passionately about. I absolutely commend him for that. 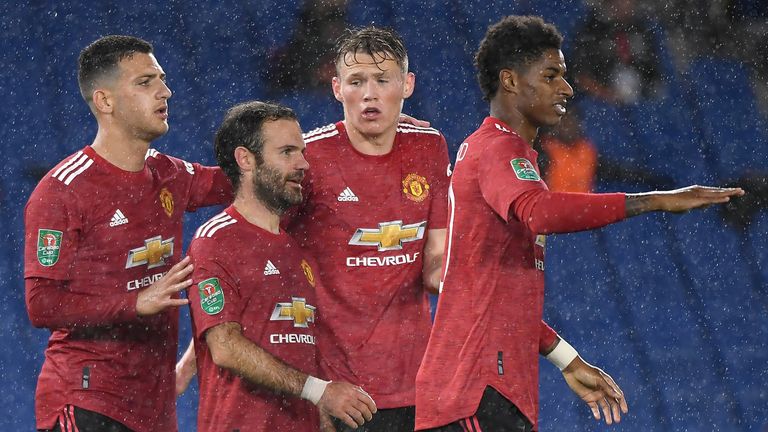 Juan Mata – the special guest on this week’s Pitch to Post Preview podcast - has encouraged more footballers to follow Marcus Rashford’s lead and use their status to make a difference in their communities. Listen to the podcast at skysports.com/podca

"There are a group of players now in the Premier League - doesn't matter what age or what team you play for - that are speaking out in the right way. It's been fantastic and he deserves credit for it."

Liverpool boss Klopp also expressed his admiration for Rashford but joked it was "tricky" for him to praise the striker because of the rivalry between Liverpool and Manchester United.

"I am not sure I can find any better words than much smarter people have said but what Marcus has started there is absolutely incredible, it is so nice," said Klopp.

"And with all the rivalry between the clubs, in these moments we are as footballers and as human beings always united.

"It's just nice to show in a time when obviously a lot of people who are really in charge of something and don't show any sign of proper leadership, that a boy grown up in difficult circumstances and blessed with sensational talent, obviously, never forgot his roots and where he is coming from, that he has to do it.

"It is a bit of a shame that he has to do it but it is wonderful as well. I hope his mother is really proud of him. I don't know him but even I am proud of him.

"And he plays for United which makes it really tricky! I've heard about Liverpool and Manchester United (rivalry) years and years ago.

"But yes that just shows that football can be really wondrous in moments and it shows that the subject is really really serious and that is why everybody puts the rivalry aside and thinks about the more important things in life.

"So I am really happy that Liverpool can show this solidarity in these moments. Now he is a role model for that and it is truly great and it won't distract him from his football things."