Our tipster bagged +12.5 points of profit last weekend and is backing Chelsea centre-back Kurt Zouma to get cautioned against Spurs at 9/2.

Having just become a father, I'm on the lookout for role models that the lad can look up to.

I can take the kid only so far.

That's why I've been making sure - even at just two months old - he is aware of the name Harry Kane. What a human being.

In the week where the most naturally gifted footballer, Diego Maradona, passed away, it's worth pointing out that Kane has got to where he has got to through hard work, a relentless ability to take on information off well-skilled teachers and supreme football intelligence. Maradona was gifted, Kane has had to graft.

Gary Neville mentioned him in the same breath as Zinedine Zidane during his performance at Manchester City and I nodded along. It was a performance that underlined the growing admiration of his work off the ball, defensive qualities and deeper positioning. He won six fouls in that match and was responsible for the booking of Ruben Dias.

When asked about the purpose of his role following the City win, Kane replied: "Mainly just to hold up the ball. Especially when you're under the cosh a bit. Just winning fouls, trying to bring others into play."

Since the start of this Spurs four-game winning run, only Jack Grealish - in a league of his own in terms of drawing opposition - has won more fouls in the Premier League. 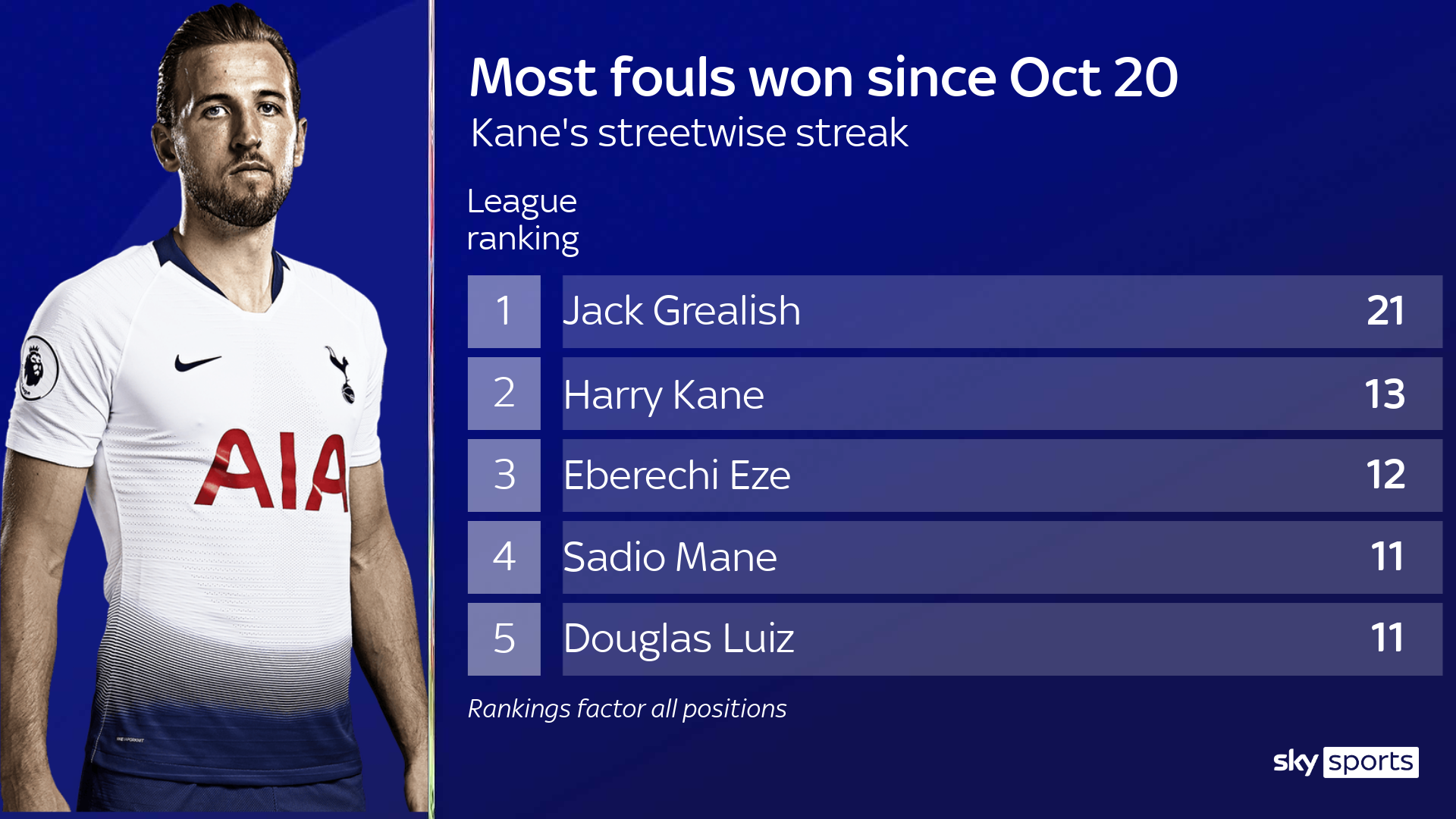 Kane's role will be the same this Sunday against Chelsea. It will be rinse and repeat. Jose Mourinho won't be throwing any tactical curveballs into the mix, he'll be out to stifle Chelsea's attack and hit them on the counter like they did to Manchester City. With this in mind, Kane will be actively looking for fouls.

From a betting perspective, this significantly increases the likelihood of opposition players within his vicinity picking up yellow cards.

N'Golo Kante (14/5 to be booked), Jorginho (9/5), Thiago Silva (4/1) and Kurt Zouma (9/2) are all going to be tasked with stopping Kane getting into dangerous positions. A tactic employed by Frank Lampard's side when the two teams met in December last year, a game Chelsea won 2-0. Zouma, especially, was very aggressive in the way he engaged Kane to the extent he was booked for a thumping challenge with 33 minutes gone.

Despite not receiving a booking this season, Zouma remains a player with great physicality and one that doesn't mind putting his foot in where necessary. At 9/2, he looks fair value to pick up a card.

I dare you to go through this weekend's Premier League games and not come out the other side thinking: 'Blimey, there's draws galore there'.

In my prediction column, I've got seven of these matches finishing all square. Sky Bet's line is set at four and although the 3/1 isn't exactly bursting with value, I like the look of the bet from an excitement perspective. It should give us a good run.

Jack Harrison might start entering conversations for an England call-up at some point this season if he maintains his current level of performance for Leeds United.

The winger is set to make his 100th appearance for the Whites against Everton this weekend in the Premier League, becoming the first player to do so while not being fully contracted to the club.

The loan deal from Manchester City is set to be made permanent in the summer and having watched him closely this season, it's easy to see why he's so highly regarded by Marcelo Bielsa and everyone at Leeds. Against Arsenal last weekend, there was a period in the first half where his direct dribbling and clever passing down the left made him borderline unplayable.

Stuart Dallas, Patrick Bamford and Mateusz Klich all missed good chances from Harrison's wing play. On another day he could have had a hat-trick of assists.

Only Mohamed Salah and Bruno Fernandes have created more chances for his team-mates from open play than Harrison in the Premier League. He's in elite company for good reason. His numbers are no fluke. 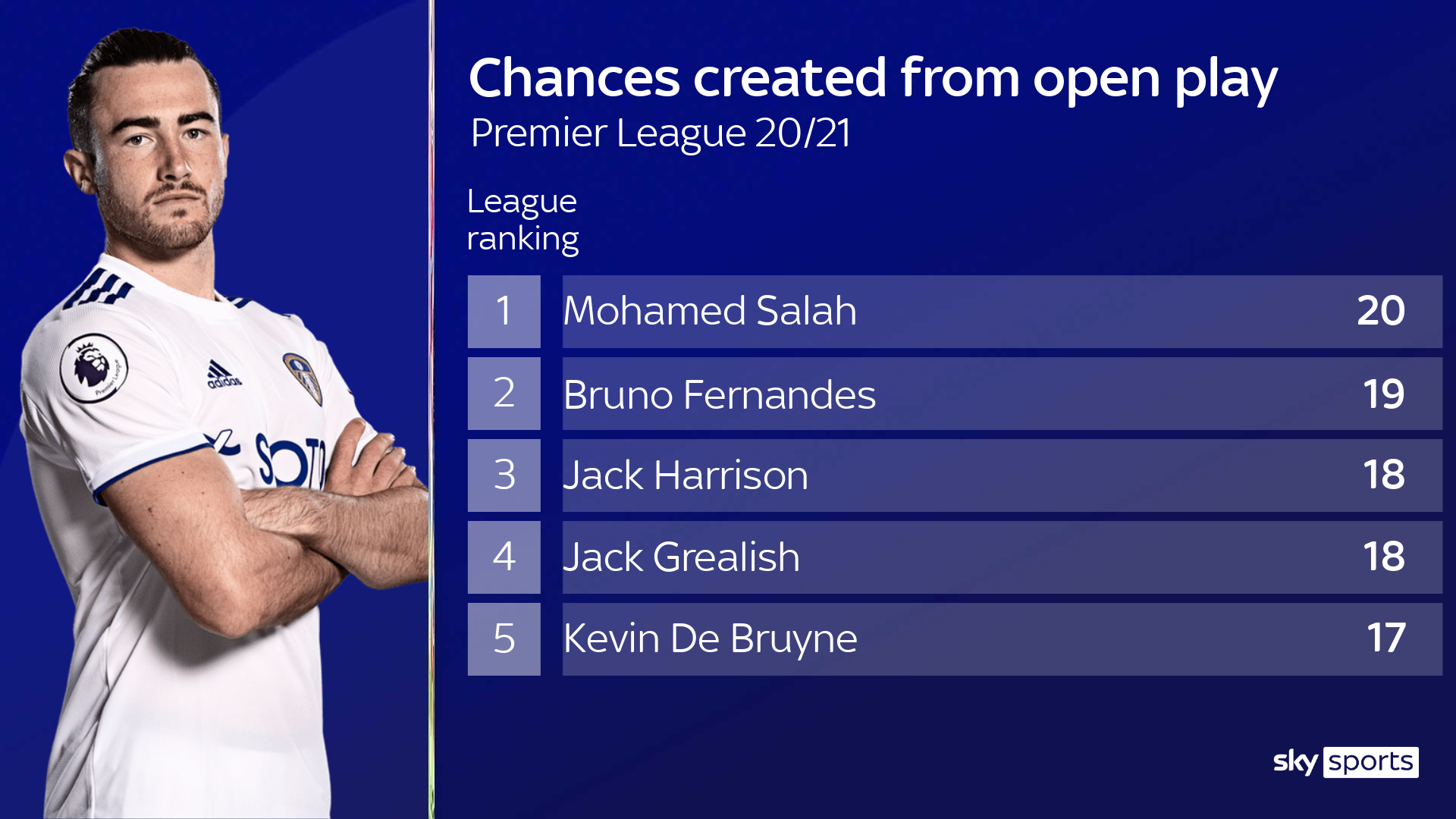 Harrison is always given plenty of creative licence by his manager down the left so expect to see him heavily involved at Goodison Park. He's likely to be matched-up down his side by the dynamic of Alex Iwobi and Ben Godfrey when Everton don't have the ball. The continued absence of Seamus Coleman means Carlo Ancelotti is rather plugging the gap with the defensively vulnerable Iwobi and Godrey, who is more akin to playing at centre-back and didn't look overly confident when tasked one-on-one with Antonee Robinson against Fulham.

I'm confident Harrison will shine once again and yes, we have to rely on one of his team-mates putting the ball in the net via one of his passes, but at 5/1 I'm more than happy to row in for him to grab his third assist of the season.