Celtic have said their warm-weather training camp was "approved by all relevant footballing authorities" as well as the Scottish Government; Scotland's First Minister Nicola Sturgeon: "There are things there that should be looked into" 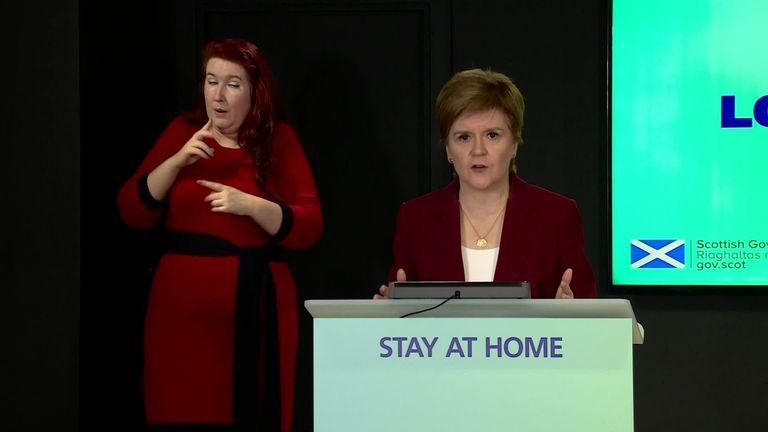 Scotland's First Minister Nicola Sturgeon says Celtic have questions to answer over their warm-weather training camp in Dubai, after the Scottish Government urged the Scottish Football Association (SFA) to look into the trip.

The Premiership champions have defended their decision to travel to the United Arab Emirates amid the Covid-19 pandemic, just hours after Saturday's 1-0 defeat to Old Firm rivals Rangers.

Celtic have since posted updates from Dubai, prompting a backlash on social media as well as criticism from the Scottish Government, and Sturgeon says aspects of the trip need to be investigated.

"For me, the question for Celtic is what is the purpose of them being there? I've seen a comment from the club that said it's more for rest and recuperation than it is for training," said Sturgeon.

"I've also seen some photographs, and I can only comment on what I've seen as I don't know the full circumstances, that would raise a question in my mind of whether all the rules of what elite players have to do within their bubbles, if social distancing is being complied with.

"There are things there that should be looked into.

In response to the Scottish Government statement, the club has issued the following response:

‘The training camp was arranged a number of months ago & approved by all relevant footballing authorities & @scotgov through the Joint Response Group on 12th November 2020.

"Elite sport, and this is not just about Celtic or football, elite sport has been in a privileged position at many points over the past year doing things that many of the general public can't do.

"And that applies to Celtic as it would to anyone else in that position."

The Scottish Government confirmed on Monday it has asked the SFA to investigate Celtic's trip to Dubai.

"We would expect the SFA to look into Celtic's trip further - while there are travel exemptions for elite sports which are designed to facilitate international and European competition, if we feel they're being abused, we won't hesitate to remove this privilege," read a statement.

Celtic responded with a tweet, which read: "The training camp was arranged a number of months ago & approved by all relevant footballing authorities & @scotgov through the Joint Response Group on 12th November 2020.

"The team travelled prior to any new lockdown being in place, to a location exempt from travel restrictions. The camp, the same one as we have undertaken for a number of years has been fully risk assessed.

"If the club had not received Scottish Government approval then we would not have travelled."

Neil Lennon gave his response on Tuesday evening. He told the club's website: "As the club said yesterday, the camp was arranged some time ago, with the full consultation of the footballing authorities and given approval by the Scottish Government.

"Of course, we understand that we are in very unique and difficult times and there are now even tougher restrictions in place at home, but the camp is risk assessed and arranged in conjunction with Scottish football's Joint Response Group.

"We have put in place all the appropriate protocols and we have undertaken the camp as we see the sporting benefits from it and hope it can do for us what it has done in the past.

"From the first day of camp yesterday and into today, the boys have been working tremendously hard as we always do on a camp which has served us so well over recent seasons. And that will be the format for the rest of the week, very tough, but productive and important sessions to get us ready for the second half of the season."

Professional sport in Scotland has been given the go-ahead to carry on regardless despite First Minister Nicola Sturgeon introducing strict new measures to combat the spread of coronavirus.

Sturgeon has ordered a March-style full lockdown amid concerns over rising cases across the country.

But Scottish football clubs and their rugby counterparts have been told they can continue to train and play as normal.

The Scottish Government has released an exemption list, which states "those involved in professional sports, for training, coaching or competing in an event" are among those allowed to leave their homes.

A Scottish Football Association statement read: "Following the First Minister's announcement regarding increased restrictions this afternoon, we will liaise with @ScotGov on the impact upon grassroots football. We will a provide further update in due course."