Coronavirus: SFA apologises to Hibernian and Hamilton after linesman should have been self-isolating

The Scottish FA has apologised to Hibernian and Hamilton after it emerged an official involved in their Scottish Premiership game at Easter Road on Saturday should have been self-isolating.

Assistant referee Graeme Stewart ran the line in Hibs' 2-0 win despite being identified as a close contact of colleague David Roome, who had tested positive for coronavirus on Wednesday after returning from a game in Greece last weekend.

Madden was only withdrawn from Celtic's 1-0 defeat at Ross County on Sunday just hours before kick-off.

An SFA statement read: "Upon further investigation by the Scottish FA's medical consultant. they [Madden, Stewart and Roome] have been considered close contacts under Scottish Government regulations. 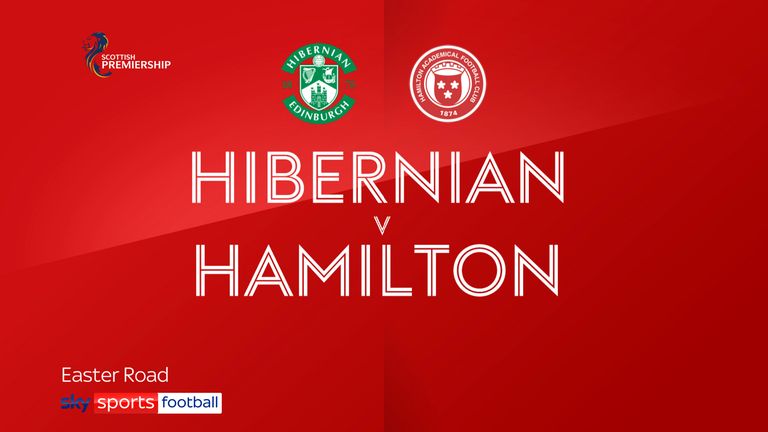 Highlights of the Scottish Premiership game between Hibernian and Hamilton

"As a result, all three match officials must now undertake 10 days of self-isolation dated from Monday 15 February, as the date of last contact for Bobby and Graeme, and from Tuesday 16, the date of the positive test for David."

The revelations mean Stewart - despite returning several negative tests this week - should not have been involved in Saturday's Scottish Premiership game between Hibs and Hamilton due to coronavirus protocols.

The SFA statement confirmed that "no players or members of team staff involved in yesterday's match have been identified as close contacts of Graeme".

It is understood this situation occurred due to a misunderstanding by the head of the SFA's refereeing department in differentiating between UEFA and Scottish Government protocols around close contact procedures.

Scottish FA Head of Referees Crawford Allan appointed Stewart to the game at Easter Road after being satisfied that UEFA protocols had been met, but these differ from more stringent Scottish Government rules.

SFA chief executive Ian Maxwell says he has apologised to both clubs after an internal review of the incident.

He said: "While the circumstances are complex, the reality is that under Scottish Government guidelines all match officials involved in the trip should be considered close contacts.

"I have reiterated that the positive case and subsequent contact tracing should have been undertaken in line with the Scottish Government's guidelines and the established system utilised by ESCAG (Elite Sports Clinical Advisory Group).

"I have tonight apologised to Hibernian and Hamilton Academical for the unnecessary risk of having an assistant referee at a match when he should have been self-isolating, however much it is mitigated by two negative tests in the build-up to the match.

"As part of an internal review, I have asked the respective departments to ensure we maintain the highest standards of compliance relevant to Scottish Government protocols."