"I'm here to try and get this team and club promoted out of League Two into League One," Adams tells Sky Sports News; Adams returns to League Two with Bradford just days after Morecambe's play-off final success 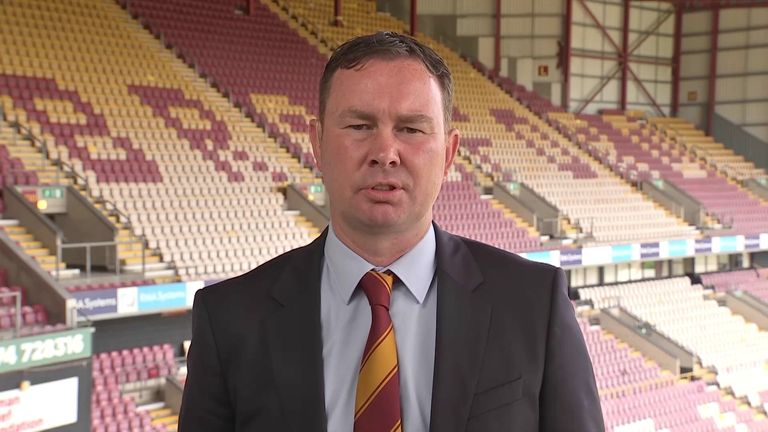 Newly appointed Bradford boss Derek Adams is targeting promotion to League One with his new club, after achieving the feat with Morecambe last season

Bradford boss Derek Adams felt his job with Morecambe was complete after he guided them to promotion to League One and he now wants to repeat the feat at his new club.

Adams has signed a three-year deal at the Utilita Energy Stadium which sees him return to League Two with Bradford, having just left the division with the Shrimps.

Morecambe recorded a 1-0 win over Newport at Wembley earlier this week, a result which clinched promotion to the third tier of English football for the first time in their 101-year history.

After being unveiled as Bradford's new boss, Adams told Sky Sports News: "I completed my job at Morecambe. I was asked to get Morecambe out of League Two into League One. That was my remit and I've accomplished that.

"It's always a difficult decision (to leave). I think from my point of view, I've left on very good terms. It's now an opportunity to go to another football club and try to do the same.

"I'm here to try and get this team and club promoted out of League Two into League One. "I know the pressures that they have at this football club. The supporters want success and I'm here to try and deliver that."

The Bantams are preparing for their third season in League Two, having been relegated from League One at the end of the 2018/19 season.

The appointment of Adams is the eighth managerial change in three years at Bradford but Adams has a proven record when it comes to getting clubs out of this division, having taken both Plymouth Argyle and Morecambe up in recent years.

He said: "I work with my own style of management. I think I've been very successful.

"If I can bring that to this football club, if I can get it moving, the style of play that excites the supporters, if we score goals and win games, then I'll be happy."