Mick Harford on mission to spread awareness about prostate cancer following his own diagnosis: "It is the most common cancer in men. It can catch you out at any time, please get tested and make sure you are OK" 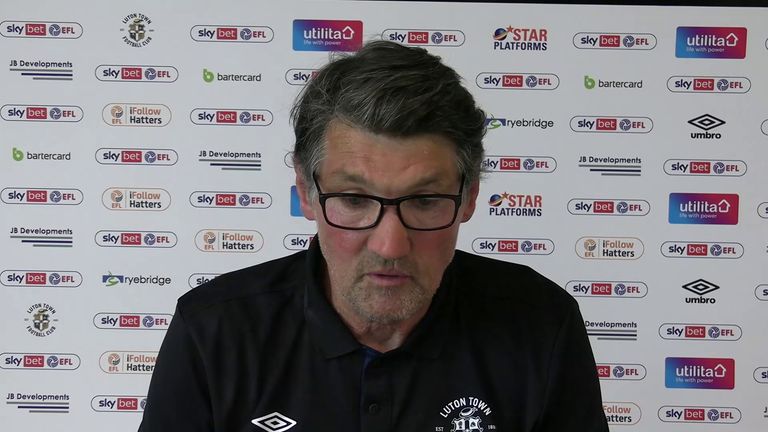 Luton Town assistant manager and chief recruitment officer Mick Harford is urging men to have a prostate examination following his own cancer diagnosis.

Luton have announced club legend Harford will be stepping down from his duties at the club to undergo radiotherapy treatment in mid-August.

The 62-year-old was diagnosed with cancer in December 2020 but continued to work with the Hatters through the Covid-19 pandemic.

One in eight men will at some point in their life be diagnosed with prostate cancer. It is the most common cancer in men and the likelihood of suffering from the illness increases with age.

Harford says he made his diagnosis public because he wanted to encourage men to get themselves tested and raise awareness of how common the illness can be.

"The main reason I spoke is to encourage people to go and get tested. I want to make people aware of the disease and know that anyone can contract it," he said. "It comes in a lot of varying degrees. I'm hoping that with my medication and the consultants that I'm seeing, I am in the right place.

"I want to put it out there and hopefully I can help some people by spreading the word.

"We tried to keep it quiet but we came to the point where we thought the best thing to do is speaking and to help as many people as I can."

Harford says he was caught out by the diagnosis despite being aware of the work done by Prostate Cancer UK and their prominence across football, having seen presenter and charity ambassador Jeff Stelling promote them on Sky Sports News' Soccer Saturday show.

"Sometimes you think you're invincible as a sportsperson, you won't be affected, but we are vulnerable," he said.

"I don't know how I got it but I have a feeling it was my lifestyle, the wrong diet, not living right. We spoke to the consultant about it, he said don't concentrate on (what happened before), but concentrate on getting rid of it.

"It's a fantastic positive outlook. That's where I am, the symptoms are not very nice, I am up and down in the middle of the night. It's very slow, I get to the toilet and it takes forever. It is all kinds of different things and it's not very nice.

"I always used to look at the badge on Jeff Stelling's jacket on Sky Sports News on Saturday afternoon - I never thought it would be me, to be honest with you.

"I knew what it was, (Prostate Cancer UK's message) was administrated across football. I was totally aware of it but us footballers and men think we are invincible. It can catch you out at any time. Please get tested and make sure you are OK."

Harford admitted he was overwhelmed as numerous figures from the football community, including his former clubs Sunderland, Birmingham, Derby and Lincoln, all took to social media to offer him their full support.

"I have been overwhelmed with the support I have received. I have had messages from all kinds of people, and me and my family have so much appreciation.

"The support from the club, the staff, the board and the players has been brilliant and very understanding. I could not have asked for more."

Mick, we are with you. https://t.co/ddsVG7rufd

Harford, who has changed his lifestyle since his diagnosis, will now undergo up to 12 weeks of daily radiotherapy as part of a three-year medication plan.

"It's not an operation (for me). The cancer has spread to certain areas," he explained.

"The treatment I am having is called targeted radiotherapy. It will go on for 10-12 weeks every day. Some people are affected by different side effects, hopefully I am not.

"Soon as I found out my diagnosis, I tried to change my lifestyle, eating better, doing some exercise and trying to lose some weight.

"I cut alcohol out of my diet and I feel great for it. I feel great on the outside but on the inside, it's not so good. I'll keep fighting and stay strong, I just want to encourage people.

"Hopefully I will be in a better place and recover sooner because of it, but it will take three years of medication to clear up. If it comes back after that, I have a problem."