Football Ally honour at annual British LGBT Award goes to Wolves and England's Conor Coady; centre-back tells event: "I hope we can soon get to a day when a football player feels supported enough to be their true selves on the football field... until that day, we all have some work to do" 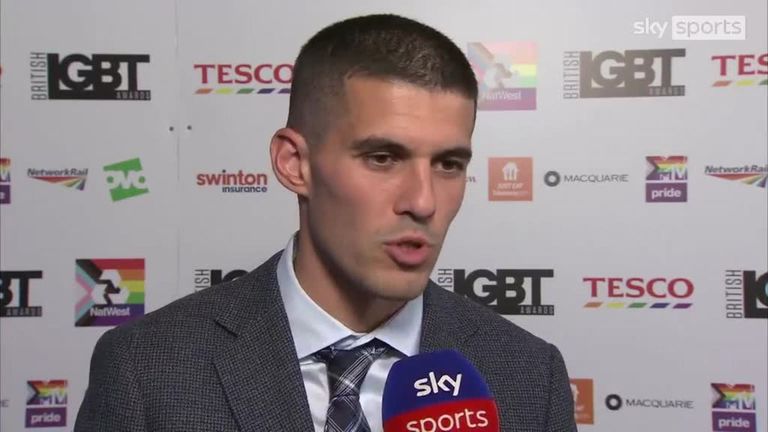 Wolves captain Conor Coady says any footballer who is LGBT+ and wants the support of a fellow professional can always rely on his allyship.

Coady was speaking at Friday night's British LGBT Awards where he was named the recipient in the inaugural Football Ally category, a one-off award being made to highlight the lack of visible representation of male professional footballers who are gay or bisexual.

The England international has been a strong supporter of Stonewall's Rainbow Laces campaign for LGBT+ inclusion in sport in recent seasons, not just wearing the rainbow captain's armband but using his voice to raise awareness of the challenges that continue to be faced by fellow players who may want to be more open about their sexuality.

During last year's annual activation, Coady took part in a special Football Association event alongside Stonewall FC skipper Jay Lemonius, hosted by Sky Sports News' Mark McAdam, which explored the symbolism of the armband and the value of inclusive leadership.

McAdam presented the 28-year-old with the award at the event held at The Brewery in London.

Coady said: "I'm very honoured to accept the Football Ally award, and very flattered to have been selected amongst such a high profile and exceptional list of nominees.

"Despite being humbled to receive this award, I have to say that the support I have given to the LGBT+ community is not anything over and above what any ally should give, and is only what I think anyone in my position should be able to offer.

"As I've said before, and I will say again, I am always there for any footballer who wants the support of a senior professional, and an ally, if they want to take the next step on their personal journey to come out as LGBT+.

"I want to reiterate that every single person, no matter their gender or sexuality, deserves to be themselves no matter what path in life they choose to take.

"I hope we can soon get to a day when a football player feels supported enough to be their true selves on the football field, but until that day, we all have some work to do."

Meanwhile, two-time Olympic gold medallist Nicola Adams was also a winner on the night, picking up the Role Model of the Year award.

The former boxer, who triumphed in the flyweight category at both London 2012 and Rio 2016, turned professional in January 2017 but was forced to retire two years later after six pro fights, having suffered a serious eye injury.

In the Outstanding Contribution to LGBT+ Life category, Lou Englefield - the director of Pride Sports, which co-ordinates the long-running Football v Homophobia campaign - was among the nominees.

The British LGBT Awards is the UK's biggest LGBT+ awards event celebrating the best British and international LGBT+ talent, as well as the allies and organisations who support them.

Commenting on Coady's award, event host and TV presenter Gok Wan said: "Conor is a brilliant and deserving LGBT+ ally who has been recognised tonight. It is wonderful to be part of this event."

Awards founder, Sarah Garrett MBE, added: "We were so delighted to be able to host a celebration of the people working hard to advocate for and advance LGBT+ rights after what has been a difficult 18 months.

"Conor Coady, alongside all of the other winners and nominees, was incredibly deserving."