AFC Wimbledon denied Oxford the chance to go top of League One as they came from behind to win 3-1 at Plough Lane.

Mark Sykes struck on the stroke of half-time as Oxford took the lead and seemed set for the summit of the third tier, but Jack Rudoni levelled after 55 minutes, and notched his second late on after Will Nightingale had put the Dons in front.

The substitute smashed an unstoppable shot into the roof of the net after a cross from Daniel Harvie on the left in the 87th minute, cancelling out Kyle Joseph's debut goal for the Robins.

Joel Mumbungo's goal was enough for Accrington to beat Shrewsbury at the Wham Stadium.

Unbeaten Harrogate stormed to the top of Sky Bet League Two with a 3-1 win at Mansfield where the home side had both Ollie Clarke and Stephen Quinn sent off.

Both red cards came in the 73rd minute, with Harrogate 2-1 ahead, as Clarke went for a foul as last man and Quinn was dismissed for striking an opponent.

Rhys Oates had put Mansfield ahead, but goals from Luke Armstrong, Jack Muldoon and George Thomson maintained Harrogate's impressive start to the season.

Forest Green were knocked into second place after a goalless draw at Exeter at St James Park.

Bradford are third after they drew 1-1 at home to Walsall, while Swindon are fourth after they snatched a late draw at Stevenage.

Northampton returned to winning ways and are fifth in the table after a 2-0 win at home to Scunthorpe, and Leyton Orient are sixth after an entertaining 2-2 draw at Newport.

Hartlepool dropped to seventh after a 1-0 defeat at Tranmere. 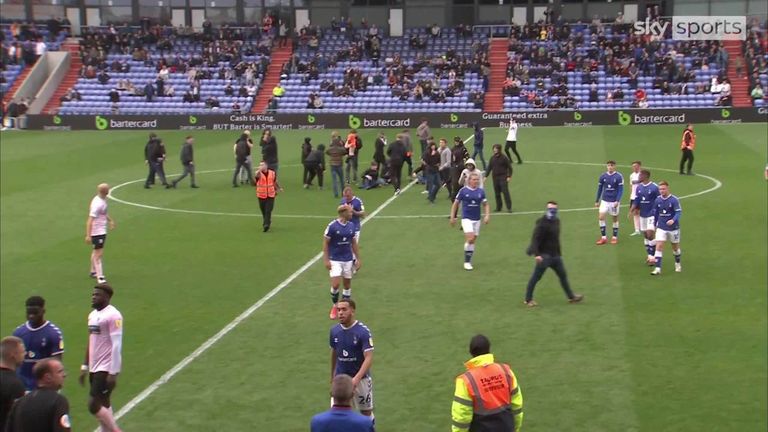 Oldham's game with Barrow was delayed mid-match as some fans invaded the pitch in protest against the club's ownership.

Elsewhere, Oldham's poor start to the season continued as they were thumped 3-0 at home by Barrow, and Salford also slumped to defeat as they lost 2-1 at Carlisle.

Substitute Leon Clarke scored as Bristol Rovers secured a much-needed 1-0 win over Crawley, and Rochdale claimed a first-ever league win at Vale Park as they saw off Port Vale 3-2.