Neil Lennon on Northern Ireland's second-half capitulation to Todor Nedelev's double for Bulgaria: "They lost their way completely. There's no leadership, the gaps between the back three, the midfield and front two was all over the place. We deserved to lose." 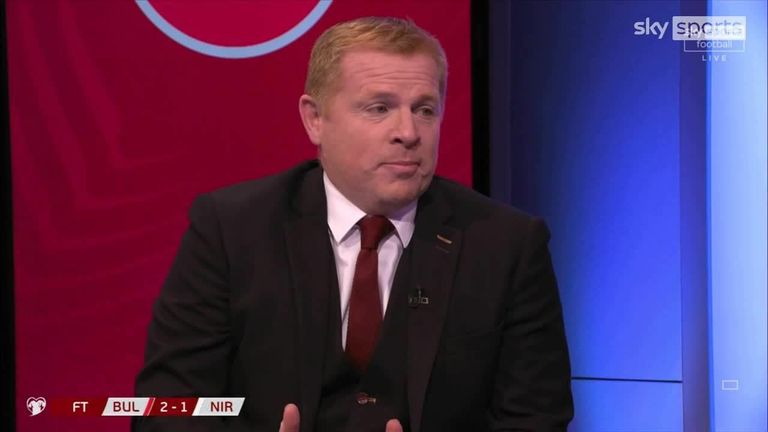 Neil Lennon was scathing in his criticism of Northern Ireland's second half performance in their 2-1 defeat to Bulgaria.

Neil Lennon fumed at Northern Ireland's "abysmal" collapse to throw away the lead and lose 2-1 to Bulgaria on Tuesday, ending their hopes of qualifying for the World Cup.

After Saturday's 2-0 reverse in Switzerland, Ian Baraclough's side needed an almost miraculous run of results to reach next year's finals, but fell at the first hurdle as a shambolic second-half showing allowed a resurgent Bulgaria to come from behind and jump above them in qualifying Group C.

Lennon, who won 40 caps for the Green and White Army, laid into his country's performance and told Sky Sports he was left angry with their capitulation, with Todor Nedelev's double turning the match around after Conor Washington's opener before the break.

"That second half was abysmal," he said. "First half, Bulgaria looked like the worst team in the group by far. We had three great chances, and then scored.

"It could have been two or three at half-time, they came out for the second half and were totally passive. They invited Bulgaria onto them, and the game management in the second half was pathetic.

"I see this Bulgaria as a third-rate quality side at the moment. They're nowhere near where they were 10 or 15 years ago, and certainly nowhere near the individual players of that time - the Berbatovs, the Petrovs. They've let the game get away from them.

"It's alright saying it's a young team, but they've got to win games. They're not going to learn by playing like that, or by losing games either.

"With 15 minutes to go, we had barely been in their half, we got a corner, took a short one and immediately it's 50 yards back up the pitch to kill any momentum.

"They lost their way completely. There's no leadership, the gaps between the back three, the midfield and front two was all over the place. We deserved to lose."

Fellow former Northern Ireland international Chris Brunt pointed to Bulgaria's bright start to the second half, and the introduction at the interval of Ilian Iliev who would set up their equalising goal, but said Baraclough's men should have had the maturity to deal with their hosts' inevitable improvement from a limp opening period.

"It was like a different team came out in the second half," he said. "They made changes which had a positive effect for them, but you deal with that.

"We spoke at half-time about how poor Bulgaria were defensively, you turn them round and then you make sure you defend your own half, but we didn't get out of our half until we were 2-1 down.

"We were second to every ball - it was disappointing to watch it. There were a lot of positives from the first half, you expect them at least to come out and hold onto it, bare minimum. It was really, really passive.

"You can sit off and sit off, but you have to go to work at some point. It's alright saying Bulgaria can have the ball 40 yards from our goal, you can be comfortable in that, but we never did.

"They looked like they were going to cause us problems every time they got the ball. We were good at doing that before, when we've done well. Let them get it wide, stop the cross, even if it comes in, we'll deal with it."

Manager Baraclough identified a 25-minute period after half-time where he felt his side had failed to wrestle back control of the game in Sofia to blame for their defeat, and refused to blame the defeat on fatigue suffered from playing with 10 men in Switzerland on Saturday.

"We were untidy with our play, we didn't get our first pass off, we weren't getting the ball into high and wide areas like we did first half, and it went a bit ragged. Whether that's a bit of tiredness or fatigue, we didn't manage the game went very well for that spell and it's cost us.

"It was a game we dominated first half, we created a good few chances and didn't take them, apart from the goal. We came in at half-time and talked about getting the intensity up again, getting the ball moving, getting a foothold in the game again.

"They'll have a spell where they'll come at us, and we have to deal with it, make sure we're winning second balls, all the little skirmishes in the game, and for a 20-minute spell in the second half, that stopped happening."

Should Baraclough stay on for Euro 2024?

Baraclough's contract is up with his country at the end of this qualifying period having won only four of his 18 games in charge, although positive talks have reportedly been held between the manager and the Irish FA about extending his deal.

Brunt and Lennon both agreed Northern Ireland's final two games - at home to Lithuania and Italy next month - would prove pivotal in how his future pans out.

Brunt said: "Michael O'Neill, probably the most successful manager we've had in recent times, had a rough start to his tenure too. It's easy to say he's not won many games, but we're a small country. He's coming off the back of a really successful period, the players are getting to the wrong ends of their careers, and he has to bring some younger lads in.

That's a positive thing for us moving forward, so these next two games, they're a dead rubber in terms of the group, but for him and his coaching staff, they'll want to get two positive results to show the fans that they can do the job and it's his to move forward. It's a result-based business, and if you don't win games, it's difficult."

Two poor results at Windsor Park next month could leave Northern Ireland in a lower pot in the draw for Euro 2024 qualifying, and Lennon added this should be the first priority for Baraclough no matter who is chosen to lead the country towards that competition.

He said: "Italy coming to Belfast looks after itself from a psychological point of view, the players will raise their game. Lithuania are a poor team, at home, you want a win going into that Italy game. So they're two good games in different ways."