Louis van Gaal, who was cycling near the team hotel when he fell and was taken to hospital for tests, used a golf cart to conduct Monday's training before the Group G decider; watch Netherlands vs Norway live on Sky Sports Premier League on Tuesday from 7:40pm 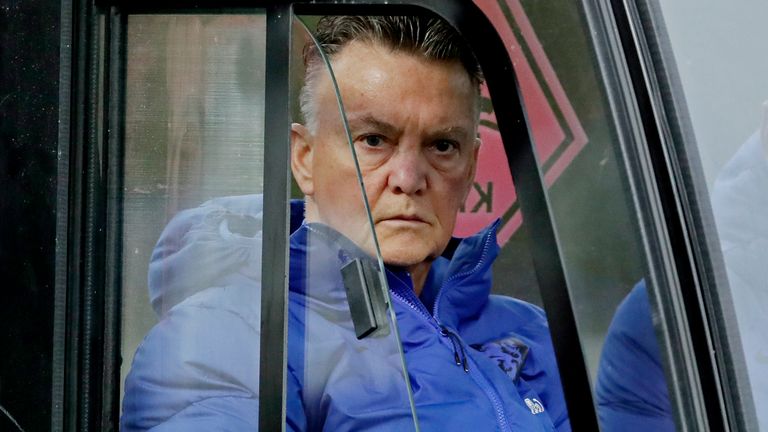 Netherlands coach Louis van Gaal suffered a hip injury when he fell off his bicycle on Sunday but will be able to coach his team in Tuesday's World Cup qualifier against Norway in Rotterdam.

Van Gaal, who was cycling near the team hotel when he fell and was taken to hospital for tests, used a golf cart to conduct Monday's training before the Group G decider, where the Dutch need a draw to seal a place at next year's finals in Qatar.

The 70-year-old also was unable to attend Monday's pre-match press conference in person but made an appearance via video link, sitting in a wheelchair.

"Physically I'm not good, but the brain is still working. I'm in a lot of pain, that's why I was in a buggy during training," Van Gaal told reporters ahead of the match, which is live on Sky Sports.

"I can still do everything and have done all the preparation that I normally would have."

Netherlands captain Virgil van Dijk, who did appear at the press conference, said the incident was "definitely a shock".

"We are happy that he can lead us and it hasn't impacted much in terms of the preparation. This morning he chaired an important meeting and still guides us. Van Gaal is still keen to make it to the World Cup." Former Manchester United boss Van Gaal said that he would be on the bench on Tuesday and expected the Dutch to win the game and secure top spot in their group.

They could have qualified last Saturday at Montenegro but gave up two late goals and were held 2-2 in a surprise result.

When Van Gaal was coach of AZ Alkmaar 2007, he broke a fibula and an ankle and also coached several training sessions from the seat of a golf cart.