Strong visible displays of allyship - such as Harry Kane wearing a rainbow captain's armband - are valuable ways to show support for people in sport who are LGBTQ+, says Erin Williams, who is Sport Engagement Manager at the charity Stonewall

The impact of visible allyship shown by leading sports stars like Harry Kane and Lewis Hamilton should not be underestimated, says the charity behind the Rainbow Laces campaign.

Kane wore a rainbow captain's armband when England beat Germany at Wembley during Pride month in June, en route to reaching the final of Euro 2020.

His England team-mate Jordan Henderson wore Rainbow Laces in the 2-0 last-16 victory and scored with them in his boots in the 4-0 quarter-final triumph over Ukraine in Rome. The Liverpool skipper has also used his social media platforms to raise awareness about LGBTQ+ equality and other causes.

Last weekend, a special Progress Pride flag design was seen on Lewis Hamilton's helmet on race weekend at the Qatar Grand Prix, where he took the chequered flag.

As Stonewall's Rainbow Laces campaign returns for its annual activation, starting on Thursday and running until December 12, the charity hopes this year's 'Lace Up and Speak Up' theme encourages similar support from professional athletes at all levels of their sport.

"Allyship is about working together, standing up and speaking up - for people, with people, to people - who might otherwise be excluded from various different aspects of life, including sport," says Erin Williams, sport engagement manager at Stonewall.

"When it comes to sport, we're often talking about team-mates - it's really about accelerated and excellent 'team-mateship'.

"Rainbow Laces has been fantastic in bringing that visibility over the years. This summer, we saw the Great Britain hockey captain at the Olympics wear a rainbow armband, and we saw it from the England men's football team. We actually sold out of rainbow armbands when Harry Kane wore one!

We're proud to be supporting #RainbowLaces. Let's lace up and speak up to celebrate and promote LGBTQ+ inclusion in sport.

"Jordan Henderson has been doing it as well. It's fantastic to see but we don't want it to stop there.

"This year, we're asking people to lace up, speak up, and start the conversation. We know that LGBTQ+ people are still excluded from sport - four in 10 people don't feel welcome at sporting fixtures - so actually we still have work to do. Just starting those conversations is the way to take those actions forward."

Football referee Ryan Atkin, who officiates in the National League and EFL, is one of 17 Stonewall Sport Champions - ambassadors who lend their voices in support of the Rainbow Laces campaign.

Atkin shared his personal story with Sky Sports back in 2017, describing how he is proud to be a gay man working in professional football and that match officials are particularly well placed to talk about equality in sport. 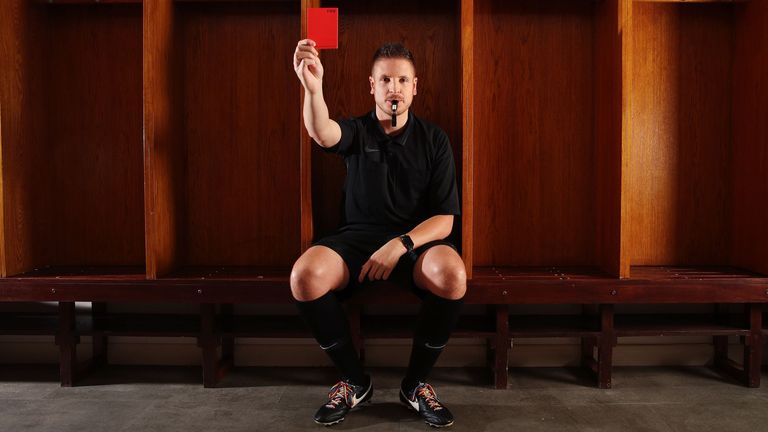 Football referee Ryan Atkin, who is a Stonewall Sport Champion on the Rainbow Laces campaign, says players who speak up for inclusion and LGBTQ+ human rights are helping to move these conversations forward

Speaking alongside Williams on Sky Sports News about his experiences in the men's game, he said: "It's about feeling welcomed within the environment.

"Football has obviously struggled over many years to be inclusive but Rainbow Laces has started that journey for a lot of people.

"Visible allyship has a huge impact, especially for younger people that are looking for role models. They see their sporting stars in the limelight, they see them on TV, and they emulate them, whether that be in school or in their social circles.

"If they see those individuals standing up for others, they will stand up too. I think that's really important, that sort of peer-on-peer learning. Sports stars have a massive responsibility to get behind campaigns that they also believe in." 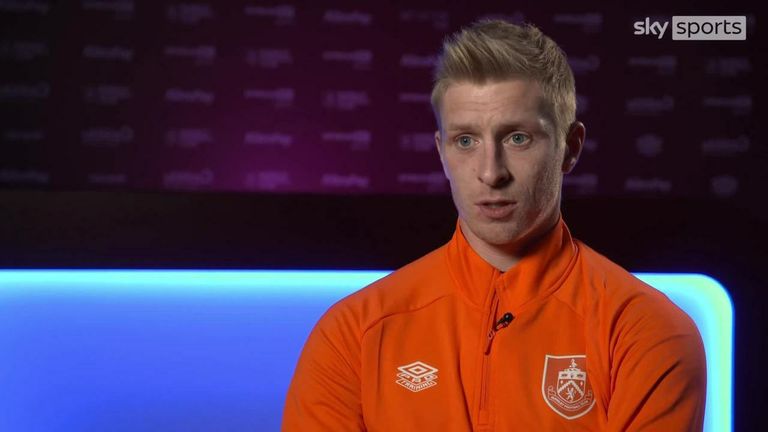 Burnley captain Ben Mee is happy the Premier League is supporting important causes, as this year's Rainbow Laces campaign launches with the new message 'Lace Up and Speak Up'

Premier League, EFL and Premiership Rugby clubs will be among those activating the Rainbow Laces campaign at matches this weekend, while organisations in other sports such as PDC darts, England Netball and England Golf will also be showing support at their events and tournaments.

Meanwhile, Hamilton's helmet design gesture in Qatar coupled with the 'one year to go' milestone ahead of FIFA World Cup 2022 has broadened the conversation on LGBTQ+ inclusion in sport.

Atkin says he is encouraged by the shift to a more global focus, adding: "It's certainly moving in the right direction with footballers now standing up for what they believe in.

"When we look at the World Cup and human rights, it's right that footballers should speak up because they're more than just footballers - they have these voices, they have this presence, and they're playing the sport that they love.

"Why shouldn't they speak up about things that are very personal to them?"

Lewis Hamilton was praised by Racing Pride for wearing a rainbow helmet in Qatar, as the seven-time world champion looks to educate people around the world and have positive conversations on the matter

As for continuing to create more LGBTQ+-inclusive environments in the UK, Williams believes everyone can play their part, from grassroots to the elite.

Research undertaken by ICM for Stonewall in 2020 suggested one in five sports fans still think homophobic, biphobic and transphobic language is harmless if it is meant as 'banter'.

"With 'banter', no one is saying we want to take the humour out of sport, but banter has to be consensual - it can't cross the line and be offensive," she explained.

"We know 33 per cent of LGBTQ+ people in Europe are not out to anybody in their sporting life. You might be in a locker room and say something that you think is harmless but you don't know who's hearing that, and you don't know what impact that's going to have on your team."