Scottish Premiership: Celtic, Rangers, Motherwell, Dundee and Hearts feature in the WhoScored team of the month

Champions Rangers remain top of the Scottish Premiership; Celtic trail their Old Firm rivals by four points; Motherwell are in fifth after a strong November

Motherwell dominate the WhoScored.com team of the month for October, with the top three also featuring after another hectic spell in the Scottish Premiership.

The Fir Park side won three games in November, keeping clean sheets in each one, and find themselves in fifth in the Scottish Premiership.

Leaders Rangers ended the month with a 3-0 win at Livingston while Celtic kept up the pressure finishing with a 2-0 victory at home to Motherwell.

Dundee also feature after an impressive performance against Motherwell at Dens Park. 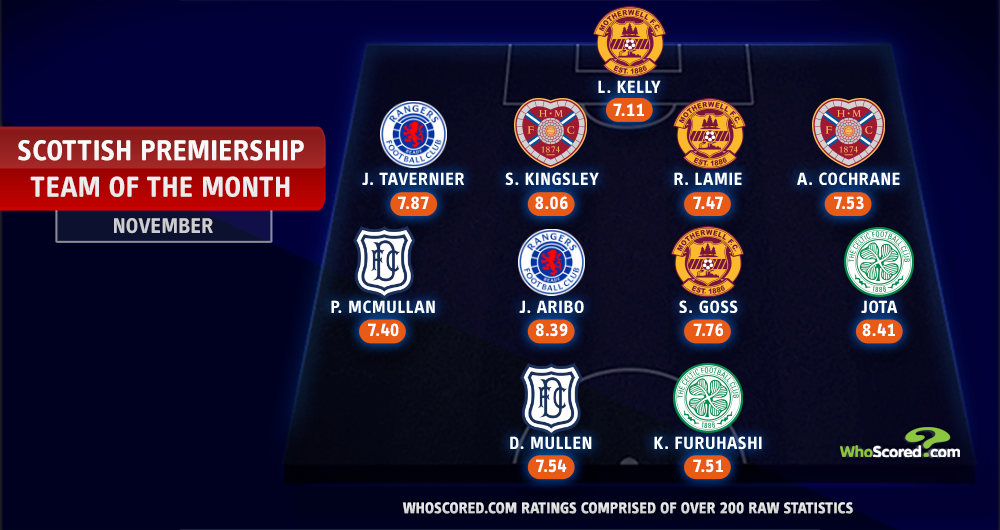 The first of three Motherwell players to make the XI, Liam Kelly was solid between the sticks last month. The 25-year-old made more saves (17) than any other Scottish Premiership goalkeeper, and kept a clean sheet in three of his four outings. For context, no other goalkeeper returned more than one. All in all, it was enough for Kelly to yield a WhoScored.com rating of 7.11.

League leaders Rangers have two players make the team of the month, with James Tavernier kicking things off at right-back. Seven key passes was the seventh best return in the division in November, which is all the more impressive considering he made just two appearances. That translated to three assists - no player registered more - as Tavernier garnered a WhoScored.com rating of 7.87. Of the four goals Stephen Kingsley has scored this season, two were netted in three outings in November as the defender struck in wins over Dundee United and St. Mirren. 15 aerial duels won was the fifth most in division with Kingsley the first of two Hearts players to feature having earned a rating of 8.06.

Ricki Lamie had a direct hand in two of the five goals Motherwell scored in November, following up his assist at Aberdeen with a goal against Hearts. Only Sondre Solholm Johansen (21) won more aerial duels than Lamie (20) last month to reinforce a statistically calculated WhoScored.com strength of 'aerial duels' and secure a place alongside Kingsley in the side with a rating of 7.47.

The second Hearts player in the XI rounds off the defence. Alex Cochrane scored his second goal and registered his first assist of the season in November, both of which came in a man of the match display against Dundee United. While he was unable to help Hearts to victory against Motherwell, Cochrane did enough to feature with an average WhoScored.com rating of 7.53.

Only one player created more clear-cut goalscoring chances than Paul McMullan (2) in November, while a return of two assists was the third best in the Scottish Premiership last month. An additional three successful dribbles was also a solid return as McMullan stars on the right flank with a WhoScored.com rating of 7.40. 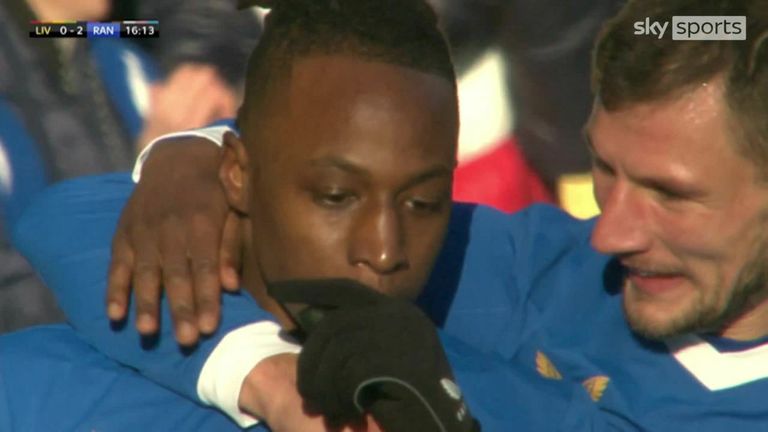 Of the six league goals Joe Aribo has directly contributed to, three came in November. Aribo struck in wins over Ross County and Livingston, and provided an additional assist against the former, those coming from respective returns of six shots and three key passes. Seven tackles and interceptions combined was also a commendable return, which helped the 25-year-old to a rating of 8.39.

The third and final Motherwell representative is Sean Goss, who earned a rating of 7.76 in November. Goss created more clear-cut goalscoring opportunities (3) than any other Scottish Premiership player last month, while only David Turnbull (11) made more key passes (10). Three of the 26-year-old's four assists this season came in November, which is why he partners Aribo in this XI. Scottish Premiership player of the month for October Jota insists he isn't thinking about his Celtic future yet.

Despite playing just two games in November, Jota had a direct hand in more goals (4) than any other Scottish Premiership player last month, scoring three. Jota's three goals came from eight shots - only Kevin van Veen (9) managed more - as the 22-year-old continues to shine. With a rating of 8.41, Jota is the WhoScored.com Scottish Premiership player of the month for November.

Daniel Mullen has only scored two league goals this season, but both of those came in November; only Jota (3) netted more. Opponents felt Mullen was Dundee's main scoring threat so took to extreme measures to keep him quiet as the striker drew eight fouls, the seventh most last month, to contribute towards his inclusion with a WhoScored.com rating of 7.54. 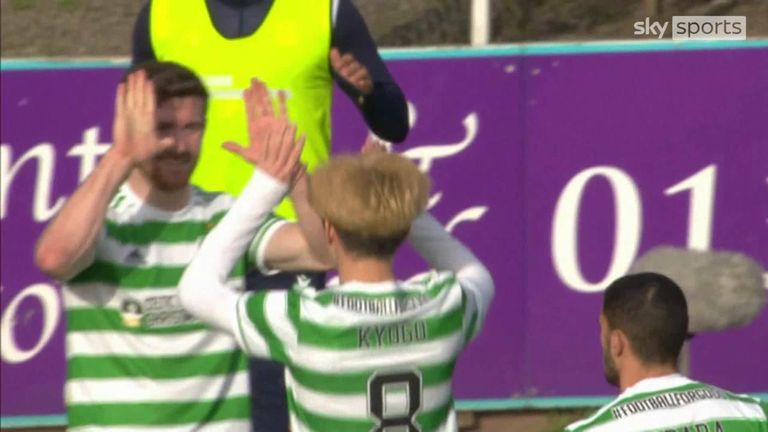 Joining Mullen on the frontline, Kyogo Furuhashi is the second Celtic player to feature. Like Mullen, Furuhashi too netted twice in November, those coming in the Bhoys' 4-2 win at Dundee. In all, the Japanese forward did enough to make the XI with a WhoScored.com rating of 7.51.